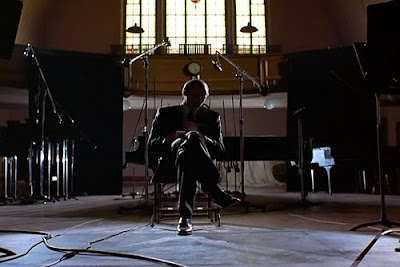 The biopic is not an uncommon form for a film to take, and there are several (or more than several) on the full 1001 Movies list. Most films of this nature take one of two forms. With one type we see a person’s life from childhood to present (or death) with the film concerning itself with the most important and formative events of that life. This tends to be the path of documentary films. Others, generally the more dramatic and dramatized biopics, focus on a single important event or time from the person’s life, making meaning of the whole life from that one event or series of events.

Thirty-Two Short Films About Glenn Gould is singular in its depiction of its topic, in this case Canadian concert pianist and radio documentarian Glenn Gould. A dramatized documentary, actor Colm Feore plays the role of Gould in many of the short films. He is never shown playing the piano, although he is frequently shown listening to his own music and reacting to it. All of the music in the film is recordings of Gould, and his work plays over every film even if Gould himself is not present in the film.

While initially difficult to follow, the film does give a grand overview of the man’s life, his eccentricities, his habits, his passions, and his beliefs. One early film, titled CD318 concerns itself with the inner workings of a Steinway piano as it is played. We see the action of the hammers as the music plays, finally ending on the tag designating not the piece played but the actual piano as CD318. We don’t learn until much later that this was evidently Gould’s piano, something we learn from the man who used to tune it for Gould.

The overall effect is less a painting than it is a mosaic. Each piece contains a small part of the ultimate whole, but only by looking at it from a certain distance does the entire portrait become clear.

Taken individually, many of the films are interesting, if a touch bizarre. Taken as a whole, they give a much clearer picture of who Glenn Gould was and what motivated him. Despite being a true virtuoso on the piano, he was not particularly interested in the instrument, claiming instead that it was merely the best way to get the music he heard out. His later work focused more on music-concrete pieces where human voices overlaying and overlapping each other—not singing, but speaking—replaced the instruments. We get descriptions of the many pills he took, a day of his diary that contains innumerable recordings of his blood pressure and pills taken. We hear his philosophy of life and death and the afterlife, and his own fears of being forgotten and considered unimportant.

Even out of context, some of these films are brilliant. A personal favorite is one of the first, called Gould Meets Gould: Text by Glenn Gould in which he interviews himself, stating as subject almost at the top that any subject is on the table except, of course, music. He then proceeds to discuss his philosophy of why he stopped performing in concert halls, instead focusing on his other work and on recorded performance. It’s a fascinating bit of philosophy, and it fades out and cuts off just as it is starting to get really interesting, which is frustrating, but ultimately kind of cool. Another short is a proposed personal ad (appropriately titled Personal Ad) in which Gould looks for a very unique series of soulmates. He reads the ad aloud, picks up the phone to call the ad in, then hangs up and chuckles to himself. There is great wit involved here.

It’s difficult to know what to make of this film. I am not a music fan by nature anymore. There was a time in my life when music was central to my existence—when knowing more than the next person was important, and judging others on their tastes was critical to my self image. That time for me has passed. But even someone like me, who has become so totally ambivalent to music over the last three or four years, can appreciate not only the unique genius of Gould, but also the unique portrait presented here. This is a fascinating portrait of a troubled man who was simultaneously a prodigy. It’s out of my normal wheelhouse, but I’m also extremely happy to have watched it.

Why to watch Thirty-Two Short Films About Glenn Gould: A unique portrait of a unique mind.
Why not to watch: It’s too disjointed for all tastes.
Posted by SJHoneywell at 11:38 PM