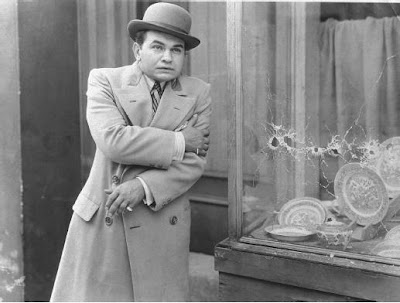 The stereotypical movie gangster got its start from two films of the same era: Little Caesar and The Public Enemy. The actors in these two films, Edward G. Robinson and James Cagney respectively, were more or less typecast as thugs and hoodlums. Both actors did other things, of course. Cagney worked in musicals, several of which are on this list, and Robinson eventually took smaller roles in great films and acted to great effect. But the short, pugnacious, cigar-chewing, wide-lipped, perpetually frowning thug got its start in the pre-Hays Code days of 1930-1 in the person of Robinson’s portrayal in Little Caesar.

Robinson portrays Cesare Enrico “Rico, Little Caesar” Bandello. We start with a small-time hit in which he and his partner Joe Massara (Douglas Fairbanks Jr.) knock over a gas station, and then go sit in a dinner. While there, Rico sees a write-up in the big city newspaper about a party thrown for a local big time crook by his cronies. That’s the life he wants, and he’s taking Joe with him. Joe isn’t really that interested, though. He’d like to go back to his first love: dancing.

They head to the city, and Rico immediately hooks up with Sam Vettori (Stanley Fields) while Joe goes out and gets himself that dancing job, keeping both musical and other time with Olga Stassoff (Glenda Farrell). Rico is given the nickname “Little Caesar” because of his first name. While Joe concentrates on his dancing career, Rico fully accepts the gangland life. Eventually, the gang plans a raid on the club that Joe works at, in no small part because Joe is still a part of the gang and can act as a lookout.

The raid goes off, but not without a hitch. In the course of the robbery, Rico guns down the new crime commissioner, a crime for which he cannot be protected. Joe, of course, witnesses this, but promises not to say anything to anybody. With the loot from the robbery backing him up and his new status as a man not afraid of using the gun, Rico wrests control of the mob from Sam, turning Sam into one of his flunkies almost immediately.

The other hitch from the robbery is the getaway driver, Tony (William Collier Jr.). Already a nervous man, he panics and crashes the car, then goes home to his mother. In talking with her, he realizes that the life of crime is no good for him, and he plans to confess everything to the local priest, a plan he foolishly admits to Otero (George E. Stone), another gang member. Before he can go to confession, though, Rico guns him down on the church steps, then gives him a massive funeral.

Eventually, Rico rises to the top of the crime heap and is given the same sort of testimonial dinner that prompted his move to the big city. This also involves a threat to his life, and he’s wounded in a burst of gunfire from a rival thug. In retribution, Rico doesn’t kill him, but buys him out and forces him out of town. Now Rico is in the big leagues, and is rolling in material wealth. He tries to bring Joe back in on the take, but Joe isn’t buying. He likes his life and loves Olga, but Rico won’t let him go. This conflict sets up the final scene between the two, and begins Rico’s meteoric descent back to the world he started from.

To modern eyes, Little Caesar is all cliché and obvious, which means it really can’t be watched with modern eyes. The reason the film looks so clichéd, of course, is that it began those clichés—this film is the original and the rest are imitators. Much of that is the character of Rico as portrayed by Robinson. What is now a stereotype was, at that time, a completely original performance, and an incredible one. Rico is in most of the scenes of the film, and is also the driving force behind it. He is the one who moves the plot forward. Everything happens because of Rico’s desires, Rico’s needs, or Rico’s quest to become a big man in a big city.

If I have a complaint here, it’s that everything moves too fast. With its under-80-minute running time, everything happens so quickly that it feels as if there is no time for anything to truly build up naturally. Rico’s rise and fall and especially Joe’s relationship with Olga seem so forced because there is no development there—it just happens. That may well simply be a function of the time in which the film was made, but much of the story feels like short shrift.

Still, this is where the true modern gangster movie started. Without Little Caesar leading the way, this list would lose a good number of films, because they wouldn’t have been made.

Why to watch Little Caesar: The real beginning of the gangster film.
Why not to watch: It has become clichéd in spite of itself.
Posted by SJHoneywell at 11:40 PM