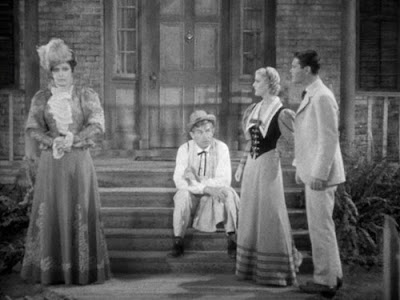 Like many of the great personalities of yesteryear, the star of Will Rogers has faded in the modern day. His movies don’t get shown much, and his populist, homespun wisdom, laconic delivery, and self-effacing brand of humor has little traction in today’s world. Judge Priest offers an interesting look at the man. It’s evident that in many respects in this film, Rogers is playing himself rather than a character.

The other reality of Judge Priest is that it takes place in the Deep South in the years following that War of Northern Aggression, and it is filled with the sort of pro-Dixie propaganda that certainly pervaded that part of the country (and still does in some places). Those non-white folks are still the backwards servants that they had been for generations before, and that antebellum view of the slave as childlike and needing to be cared for is never far from the thoughts of the characters or the words in the script.

In no place is this more apparent than in the two characters of Jeff (Stepin Fetchit) and Aunt Dilsey (Hattie McDaniel). Jeff is the town layabout, the laziest man around. He’s accused of stealing chickens at the start of the film, which is our introduction to him, to Judge Billy Priest (Rogers), and to Priest’s nemesis Senator Horace Maydew (Berton Churchill). Judge Priest takes the trial on something of a roundabout course, ends up exonerating Jeff, and turns him into his own flunky and gofer.

Shortly after this, we’re introduced to Aunt Dilsey, who is Judge Priest’s maid, cook, and general servant. Aunt Dilsey sings constantly, essentially narrating her daily duties (belting out, “I got to take down de judge’s clothes/Got to take dem in de house, yes Lord/Got to get out dat old ironin’ board” as she removes clothes from the washline). Aunt Dilsey is a menial servant, and just benighted enough to be happy in her work.

The big event of the day is the return of Jerome “Rome” Priest (Tom Brown) from a Yankee law school. He’s come home to set up practice in town, one that will no doubt benefit greatly from the fact that his Uncle Billy is the town judge. Back home, Rome courts the neighbor girl, Ellie May Gillespie (Anita Louise), although she pushes him off, and we don’t know why. We discover soon enough that Rome’s mother (Brenda Fowler) has her own thoughts on the matter. Ellie May’s parentage is suspect, and that will not do for the Priest name. She’s got her mind set on the boy marrying Virginia Maydew (Rochelle Hudson).

Ellie May seems to know this, and is being paid court by the town barber and local idiot Flem Talley (Frank Melton), who has a laugh the eventually turned into the laugh of the father on the old Hillbilly Bears cartoons. Billy Priest does everything he can to get Rome and Ellie May together, and that’s pretty much the whole start of the film.

Flem Talley speaks loosely of Ellie May in his barbershop, which brings down the ire of the local pariah, Bob Gillis (David Landau). Later, Talley and a couple of his friends lay in wait for Gillis with pool cues, and when it’s Gillis who lays waste to them, they decide to take legal action against him. Gillis turns to Rome Priest for help, and Judge Priest’s enemy Horace Maydew forces the judge to recuse himself from sitting on the bench. And it’s in this court case that all of our story’s threads come together in a flashback sequence that involves the glory of the South, the justification for the Civil War, and pushing the idea that Dixie was justified in everything it did. ‘Scuse me while I throw up in my mouth a little at the thought, and then put the end under a spoiler tag.

Of course, Bob Gillis is Ellie May’s father. More importantly to all concerned, evidence comes to light that Bob Gillis fought bravely for the Confederacy in the Civil War, risking his life for the glory of Dixie and all for which she stood. And on the basis of that alone, Bob Gillis is exonerated and Rome’s mom is filled with approval of Ellie May.

A film like this is difficult to judge from a modern perspective. Certainly the character of Judge Priest is inching slowly toward tolerance, although he’s still a long way away from today’s sensibilities. More concerning to modern eyes is the fact that the racism that is evident throughout the film, either explicitly toward characters like Jeff or implicitly in the support of the ideals of the Confederacy, is seen is just, natural, and good. It’s hard to overcome.

And so I’m torn on this film. On the one hand, it’s a rare and real pleasure to see and hear Will Rogers. On the other hand, the film is so completely mired in the sensibilities of the “Lazy Negro” and happy servant that it’s difficult to watch without wincing.

Why to watch Judge Priest: The homespun wisdom and downhome-y goodness of Will Rogers.
Why not to watch: Tacit racism throughout.
Posted by SJHoneywell at 11:46 AM