Who You Gonna Call? Not These Guys. 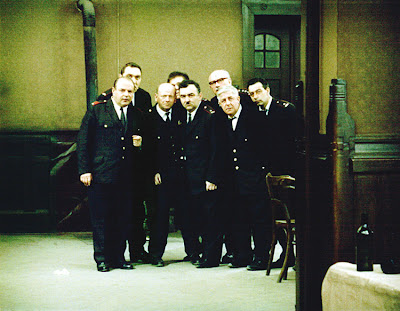 Comedy sometimes translates from one culture to another and sometimes it doesn’t. There are some things that seem to be funny regardless of who’s doing it while other things are culture specific or time specific. Milos Forman’s Hori, Ma Panenko (The Fireman’s Ball) falls somewhere in the middle. Some of the events of this strange little comedy are riotously funny. Others are funny only in the context of the film being made in Czechoslovakia in the late 1960s. If you don’t know that this was filmed in a Communist country, much of what makes it funny will go straight over your head.

Hori, Ma Panenko is a comedy of errors. It concerns a volunteer fire brigade in a small town in Czechoslovakia. Wanting to do something nice for their former chairman who has cancer (but doesn’t know it—the doctors refuse to tell him), the brigade wishes to present him with a ceremonial fire axe for his 86th birthday. They’d have done it for his 85th if they’d known about the cancer.

Regardless, they decide to have a ball, a fundraising lottery, and a beauty pageant. The bulk of the story takes place at this ball and concerns the series of idiocies, problems, and outright fraud that occurs there. First is the table of items for the lottery. Even before the ball begins, they start to disappear, the food and booze items going first. As the ball goes on, more and more items slip away from the table despite the fact that one of the fireman is attempting to keep an eye on it, and the fact that his wife seems to be joining in on the thievery.

While this is going on, a few of the firemen attempt to put together a collection of women to compete for the beauty pageant. Many of the firemen want their own daughters in the competition regardless of how tubby or homely they are. None of the girls appear to really want to be in the pageant. One mother wants to watch the judging process and won’t leave the room with the firemen. Another girl strips down to her bathing suit. And naturally, while this is happening, the prizes on the lottery table continue to vanish.

Eventually, it’s time for the beauty contest, but the girls who were selected refuse to participate and instead lock themselves in a bathroom. Other women are commandeered to the stage—dragged in some cases—but it’s all for naught, since at that moment, the fire alarm goes off. There’s a fire in town. The house burns to the ground since the fire brigade has no real equipment and is forced to resort to shoveling snow onto the burning building.

Everyone returns to the ball, and many of the partygoers respond to the fire by donating their lottery tickets to the old man whose house burned down. Of course, since at this point virtually all of the lottery prizes are gone, it means nothing. The lights are turned off so that the guilty can return the stolen items, and when the lights come back on, everything is missing. From here, things continue to go downhill for the hapless brigade.

Milos Forman made this film without professional actors, and he didn’t need them. He used an actual fire brigade in a small town, and was based on a real experience of a real nightmarish fireman’s ball. The film, which humorously depicts corruption, incompetence, and outright criminal behavior from virtually everyone involved, caused a huge uproar and was eventually “banned forever” by the Czech state. In fact, Forman was rescued from a 10-year prison term for causing damage to Czechoslovakia by virtue of his French distributors, and emigrated shortly afterward.

All of that is interesting, of course, but the real question is whether or not the film is funny. It is, after all, a comedy. The answer to that isn’t that easy. Hori, Ma Panenko has not aged particularly gracefully. Parts of it are still funny, of course, but much of it requires the context of when and in what country it was shot simply to understand why something might be funny. This is true of both the comedy and the political satire here.

Why to watch Hori, Ma Panenko : A slice of Czech life turned on its side.
Why not to watch: Not all the comedy translates.
Posted by SJHoneywell at 11:55 PM