What is your addiction? Most people have one even if they don’t think they do. So what is it? Football? Food? Chocolate? Coffee? Sex? What is it that you have no control over? If you’re honest with yourself, you probably have several things that you can’t control yourself around. It’s a running joke where I work that I have no self control when it comes to Fig Newtons. When I open a sleeve of them, I walk around and offer them out to people because if I don’t, I’ll eat the whole thing. 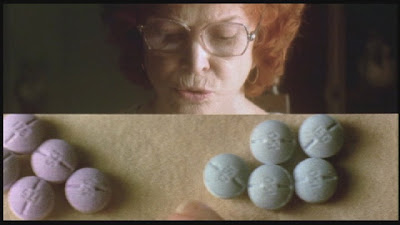 Requiem for a Dream is a film about addiction. It would be easy to make the mistake on a first viewing to think that it’s specifically about drug addiction, but that’s the easy path to take here. Drug addiction is one of those things that we as a society look at and think of as a terrible problem that must be dealt with, but we ignore the fact that other addictions drive us and control us just as much and just as easily.

Requiem for a Dream is the story of four intertwined lives and the various addictions that move these people, drive them, and ultimately destroy them. Standing in the middle is Sara Goldfarb (Ellen Burstyn), a widowed mother who lives on her own and who is slowly spiraling into loneliness and depression. Her world focuses around her television, specifically around an infomercial for something called “Juice by You” and hawked by a shill named Tappy Tibbons (Christopher McDonald). Sara has a son named Harry (Jared Leto), who has big dreams of an easy life and a reality that focuses on providing himself with heroin. Similarly addicted is his best friend, Tyrone (Marlon Wayans) and Harry’s girlfriend Marion Silver (Jennifer Connelly), although she sometimes dabbles in a bit of cocaine as well. See? Easy slide into calling this a drug film.

Harry and Tyrone frequently pawn Sara’s television for smack money, a process she completes by getting the set out of hock the next day from the local pawnshop owner. The two of them have a plan, a typical junkie plan, of scoring a pile of heroin and reselling it, eventually working their way up to a full pound of pure smack that they can cut, recut, and live off of for years. The money will not only support them but will also help Marion open a boutique.

While these plans start up, Sara receives a call that she has been selected to appear on a television show. She’s thrilled at the prospect and simultaneously distraught by the fact that she no longer fits into the red dress she wore for Harry’s high school graduation. She confides in her friend Ada (Louise Lasser), who lends her a diet book consisting of a strict regimen involving grapefruit and hard boiled eggs. Another older woman who lives in their apartment building recommends a doctor who helped her daughter lose “50 pounds just like that” through the use of pharmacology. A few days later, Sara is well on her way to becoming a full-on speed freak.

Things, of course, become complicated quickly. Despite their addictions, Tyrone, Marion, and Harry manage to successfully cut a purchase of smack and sell it off for a tremendous profit. Well on their way to becoming successful, Harry buys his mother a new television to replace the one they frequently stole. At the same time, Tyrone is involved as a bystander in a hit on his supplier, and the rest of the cash is needed to bail him out of jail. Now strapped on cash, Harry manages to convince Marion to contact her shrink (Sean Gullette) for money, knowing that she’ll essentially have to prostitute herself for the money. It becomes critical for them, because only one dealer in town is still handing out the skag. Looking to score, a group of junkies gathers until one pulls out a gun and the smack supply in New York dries up completely, and Marion is forced to prostitute herself to another connection who gives out dope for sex. Buoyed by a score, Tyrone and Harry head to Florida, ignoring the large, growing spot of necrotic tissue on Harry’s left arm. This is also around the time that Sara begins hallucinating that the refrigerator is coming to get her, starts slamming pills like candy, and seeing herself on television and then seeing her television persona in her home.

It would be unfair to call Requiem for a Dream a rollercoaster, because it is not one. It’s merely the first, largest hill. We get a nice climb up as everyone’s life appears to be on the ups and going well, and then we peak, the car starts to drop, and it simply goes faster and faster as it heads to the bottom of the hill. But with this film, the coaster doesn’t zoom back up; it just bottoms out, killing everyone in the cars.

The story is a powerful one, and would be a powerful, challenging, and difficult movie if simply filmed as a straight narrative. Place this story in the hands of Darren Aronofsky, and it becomes a nightmare vision. In one sense, it’s difficult to believe that this is only Aronofsky’s second film. It’s a mature film, the sort of story that someone with more experience should have made. On the other hand, it’s also obviously the film of a youthful director. There are so many new and innovative ideas here that it’s impossible to cover them all. In one early scene, Aronofsky places Harry and Marion next to each other. They lie on a bed, possibly post-coital, and talk, delicately touching each other. Except that it’s soon evident that rather than simply giving us a shot of the two of them, it’s a split screen. There’s a division between them even as they lie together—and it’s the same division and same split screen used earlier in a scene with Harry and his mother.

The most impressive shot in the film happens just after Sara starts slamming speed. In a shot the runs about thirty seconds, we see the daily activity of Sara as she obsessively cleans her apartment, hopped up on amphetamines. She moves in a blur, folding her clothes, making and remaking her bed, vacuuming, cleaning out the fridge, and scrubbing the tile. The camera makes a slow track, filming about two frames per second rather than 24, and her dizzying motion is a realistic depiction of her budding addiction. It’s both exhilarating and terrifying.

Aronofsky uses camera tricks like this intelligently, not simply because he can or because it adds a visual wow to the way the movie looks, but because each one has purpose and meaning for the story as a whole. At the end, as Harry sits in a jail cell in Florida screaming about the gangrenous patch on his inside left elbow and Tyrone yells for help, the entire film jumps and stutters, reflecting exactly how far out of the normal way of doing things their life has become. The montage of the four characters at the very end, showing just how far they have fallen because of their addictions is tragic, horrifying, and brutal. That all four end up literally in the same physical position only underscores this reality.

Aronofsky is greatly assisted by a tremendous cast. The film belongs in many ways to Ellen Burstyn, who has never been better, but Jared Leto and Jennifer Connelly are simimarly brilliant in their rapid decline from where they started to where they finish. It's Marlon Wayans who makes me the most angry, though. The man obviously has some real talent--he holds his own in this cast, and then he goes on to act in complete shite like White Chicks. Damn it, Marlon, go back to doing stuff like this because you're better than embarassingly stupid comedies.

Requiem for a Dream is the definition of “a hard watch.” It’s a film that should be watched, perhaps must be watched. It will be a long time before I decide to watch it again. The final shot is perhaps the most frightening thing I have ever seen. The most painful addiction, the one most impossible to give up, is our own delusion.

As a final note, even if you’ve never seen this film, you’ve heard the music, since virtually every movie since 2000 that has needed a dramatic score for the trailer has used Clint Mansell’s Lux Aeterna.

Why to watch Requiem for a Dream : A powerful realization of a powerful story and a unique visual style.
Why not to watch: In the words of a co-worker, “It made me want to commit suicide, because it made me feel that bad about the human condition.”
Posted by SJHoneywell at 3:30 PM