As a kid, I was fascinated by Greek myth. Of course, I was more attracted to the violent myths filled with heroes and monsters than I was to the more love-oriented myths, but even these I found interesting. More than anything, I was struck by how unfair many of the myths seemed and how tragic a number of them were. People repeatedly got caught up in things much larger than they were and ended up crushed by these forces. Such is the myth of Orpheus, which has been filmed several times.

In the most famous version of the myth, Orpheus is the greatest poet and musician in the world, so talented that animals stopped to listen and trees and rocks came alive and danced. He and his wife Eurydice loved each other completely, but a satyr was taken with her beauty and pursued her. Eurydice fell into a nest of vipers and was killed, causing Orpheus to fall into a terrible depression. His playing convinces Hades to release Eurydice back to life, but only on the condition that Orpheus does not look at her on the trip back. The two wander through the Underworld until they reach the exit, when Orpheus glances back, losing Eurydice forever. Swearing off women forever, he is eventually torn to pieces by the maenads (followers of Dionysus), and his head—still singing—floats down a river on his lyre. Gruesome, and kind of cool. 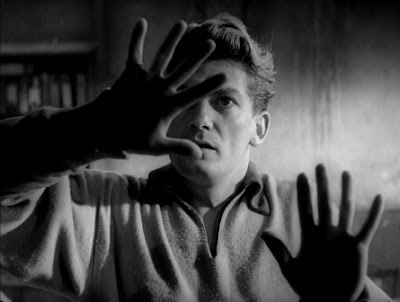 A myth like this one is ripe for interpretation, and in the 1950s, it was interpreted at least twice. First is Jean Cocteau’s Orphee (Orpheus), the middle film of his Orphic Trilogy. Cocteau takes a great deal of liberty with the basic story here, covering the Orpheus and Eurydice myth only on its edges in that we do have a character named Orpheus, he’s married to Eurydice, and there’s some death going on here. But Cocteau decides to essentially rewrite the myth in this version. Here, and this is a great indication that this isn’t taking place in Eisenhower’s America, Orpheus (Jean Marais) is a poet and is renowned enough to have groupies. However, he has fallen somewhat out of favor with the locals. The new poetic flavor of the month is a young man named Cegeste (Eduoard Dermithe).

In a brawl at a café (which sounds like a contradiction in terms, or that “brawl” is to sound more masculine than poets hurling epithets at each other), Cegeste is killed when he is run down in the street by a pair of motorcyclists. His patron (Maria Casares) who is considered a princess but is actually Death takes the body of the young poet back to her house, bringing Orpheus with her as a witness. However, since she is actually death, she takes Cegeste into the underworld, leaving Orpheus with her chauffeur/dead guy servant Heurtebise (Francois Perier).

This sets up one of the strangest love trapezoids ever conceived. Princess Death finds herself obsessed with Orpheus and visits his room every night. Orpheus is equally obsessed with Princess Death, essentially forgetting about his wife, Eurydice (Marie Dea). He’s also obsessed with a strange radio broadcast of nonsense sentences that, as it turns out, are the poetry of Cegeste (as well as a nod to the BBC broadcasts during WWII to the French Resistance). Heurtebise finds himself enthralled with Eurydice. For both Princess Death and Heurtebise, loving a mortal is a terrible crime, and they risk severe punishment.

Eventually, giving in on her impulses, Death sends her motorcycle assassins to kill Eurydice, and she takes her to the Underworld. Orpheus follows, but it’s evident that he isn’t necessarily following to bring Eurydice back to the world of the living, but because of his obsession with Princess Death.

It’s damn strange. Death frees Orpheus from his bonds to her, and a tribunal in the Underworld allows Eurydice to return to the living, but only if Orpheus never looks at her again. Should he see her, she will die. And then…

It’s revealed that all of this is a dream. Eurydice wakes up and she’s alive, and Orpheus is alive, and they’re going to have a child. However, since we essentially witness Orpheus return from the Underworld through reversed film (which is actually quite effective here), it’s evident that it’s not really a dream, but is being perceived as a dream. It feels like a dream and everyone calls it a dream, but it happened, and there are real consequences for Princess Death and Heurtebise.

Cocteau’s film is strange and unnerving. He does very interesting work with mirrors throughout the film, mirrors being the way to enter the Underworld. Despite the film’s age, the effect of going through the mirrors is interesting and still works pretty well. I’m less sure that the entire film works, though. It’s a difficult film to understand, particularly with the surrealist elements that take up much of its space. It is visually interesting, but I like my myths as they are, thank you very much. I’d prefer my Orpheus story to stick as close to the original as possible. 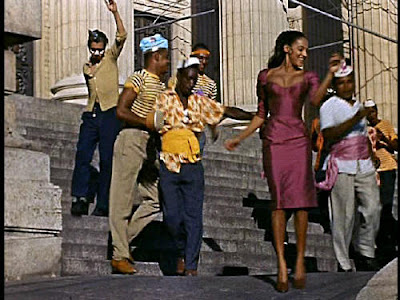 This, more than anything, is why I was not disappointed with Orfeu Negro (Black Orpheus). Marcel Camus’s film sticks very closely to the original myth, keeping much of the story the same but modernized. It’s the setting that makes this film something special, though. Rather than dreary cafes and bombed-out ruins from World War II, Orfeu Negro takes place in Rio de Janeiro during Carnival. Even better, it’s in color. This isn’t a knock against Cocteau’s film—the black and white of that film is crisp and suits the mood. But here, in Brazil during the craziest festival of the year, it’s color all the way.

Our main character is, naturally, Orfeo (Breno Mello), a streetcar driver who also plays the guitar and writes his own music. As with the mythical Orpheus, he is greatly loved by all of the women in the area. He is attached to Mira (Lourdes de Oliveira), a pretty but extremely high-maintenance woman who demands that Orfeo marry her. At the same time, Eurydice arrives in Rio on the run from a man she is convinced is trying to kill her. She meets Orfeu briefly, but leaves to find her cousin, Serafina (Lea Garcia), who happens to live next door to Orfeu.

Despite Orfeu’s connection to Mira and Mira’s demands on him, Orfeu finds himself attracted to Eurydice, and he quickly realizes that Mira is far too demanding, mean, and unpleasant. He spends a magical night with Eurydice, much to Mira’s anger. The next day is Carnival. Serafina wishes to spend the day with her boyfriend, and convinces Eurydice to take her place in the costume. This way, Serafina gets what she wants, and Eurydice can spend the day dancing with Orfeu on the streets of Rio. The veil helps with this, and it helps to keep Eurydice out of the sights of the man who wants to kill her, who has followed her, and is dressed as a skeleton.

Since this story follows the myth quite closely, this means that Eurydice is doomed, as is the love between her and Orfeu. It’s here that Camus gets the most inventive. Charon, the boatman, is represented here as a government official in the bureau of missing persons, and he leads Orfeu to the morgue where Eurydice’s body lays. When Orfeu tries to make contact with his love, he does so at an Obeah ceremony. An old woman is inhabited by Eurydice’s spirit, and disappears when Orfeu turns to look at her.

The sell for this movie is the glory of the carnival—the costumes, the dancing, and the music. It’s truly something to see, and frequently, the film continues on a scene of dancing and music after our principal characters have left the area.

There are other nice touches throughout the film. When Orfeu plays his guitar for a pair of young boys, the boys silence the animals in the area so that they can enjoy the music, a nice reminder of the original myth. The boys also ask if it is true that Orfeu sings to the sun in the morning to cause it to rise, and he admits that he does. He also tells the boys that he is not the original Orpheus, and that when he is gone, another will take his place. This comment is realized in the final shot of the film.

This film is truly special and beautiful. Some shots go on a little too long, and the non-stop music and dancing can be wearying. Regardless, Orfeu Negro is a visual delight, and the fact that it stays true to its source material intelligently is an added bonus.

Why to watch Orphee: A unique take on a classic myth.
Why not to watch: Utter confusion for most of it.

Why to watch Orfeu Negro: A vibrant retelling that sticks to the main themes and plot of the original myth.
Why not to watch: Some scenes go on too long.
Posted by SJHoneywell at 10:14 PM