Film: The Grifters
Format: Streaming video from NetFlix on laptop. 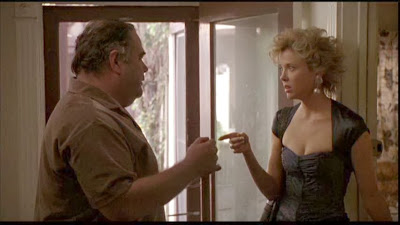 I really like The Grifters. I’ve always considered this to be the movie where John Cusack graduated from teen comedies (even some pretty good ones) into adult fare. The Grifters is a film that doesn’t pull any punches. It’s a brutal film. What it reminds me of more than anything is a film like The Sting, but run through a very gritty, ugly filter. This is neo-noir at its finest, featuring not one, but two femmes fatale and a host of characters, all on the take from somewhere.

Our three main characters start with no connection, but are soon united. First is Roy (John Cusack), a commission salesman who supplements his income liberally with short con games, such as showing a bartender a $20 bill and paying with a $10. He tries this once too often and gets a slug from a baseball bat in the gut. Second is Lilly (Anjelica Huston), whose job is to go to racetracks and bet heavily on longshots to reduce the odds, making the payouts far easier to handle. Third is Myra (Annette Bening) who uses sex as liberally as possible to get what she wants. It’s not too long into the film that we discover that Roy and Myra are not quite an item but are frequently in each other’s company and that Lilly is Roy’s mother.

When Roy’s injury turns out to be very serious and he ends up in the hospital, Lilly and Myra meet each other and instantly dislike each other. Lilly does what she can to keep Myra away from Roy, and is delayed in getting to the track. When a longshot comes in, she gets into serious trouble with her boss, Bobo Justus (Pat Hingle). Meanwhile, Roy and Myra go on a short vacation. When Myra sees Roy scamming a group of sailors, she realizes that he’s a short-con grafter. She tells him about her past working the long con with a man named Cole (J.T. Walsh). Roy, though, is resistant to playing the long con, preferring instead to work quickly for small sums.

Things get serious now—because he refuses to work the long con with her, Myra becomes convinced that he is hung up on his mother. Lilly believes that Myra has too much control over Roy. To get Lilly out of the picture, Myra spies on her, then contacts Lilly’s boss and tells him Lilly’s great secret: she has been skimming off the top for years and has collected a huge amount of money, which she keeps in the trunk of her car. Now on the run, Lilly is desperate for help, and both Myra and Lilly are out for each other’s blood. And, of course, the common point between them is Roy, who stands at the center of what happens next.

For me, the single greatest scene in this film is Lilly’s confrontation with Bobo and a towel full of oranges. This is the scene (and perhaps the one at the end of the film) that earned Huston her Oscar nomination. It’s a simple scene, but it’s beautifully directed and shot. There is incredible menace in every word and gesture. It’s one of the most awful (and most brilliant) scenes from a crime film I’ve seen. It’s also my favorite moment of Pat Hingle’s career.

The other thing I like about The Grifters is that it offers a unique view into the world of the conman, in particular the short con player. Most movies involving a con work the long con, with an elaborate plot that is slowly revealed over the course of the film. We get that in Myra’s story about her cons with Cole, but here most of the focus on the con game is on the kind of minor stunts Roy pulls to make a few bucks here and there. He works every angle he can think of. In his opening scene, he scams $10 off a bartender, then works the guy at the bar next to him for $1.50. That’s a damn short con, but it’s also a piece of scripted brilliance.

This is not a happy film, or one that is especially easy to watch. But it is a fascinating one, and one that I was happy to revisit. Some time ago, back when I was podcasting, this was a film that I suggested for a particular show. I admit that I liked it more than both Nick Jobe and our guest on that episode. I still think both of them were wrong. This is a film that deserves to be seen by more people.

Why to watch The Grifters: A disturbing look into the world of crime. Oh, and Anjelica Huston.
Why not to watch: I can’t think of a solid reason.