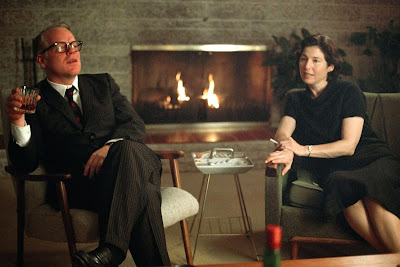 When I woke up this morning, I had no plans to watch Capote. The reported death of Philip Seymour Hoffman earlier today forced my hand, though. His death is a damn tragedy and a waste of a tremendous talent. What better way to honor one of the great actors of this generation than to watch the film that earned him his Best Actor Oscar? And so, Capote, a film that I was planning on holding back and saving for a day when I needed a film I knew I really liked.

Like many a biopic, Capote doesn’t cover the full life of Truman Capote but instead focuses on what became the most significant event of his life: the investigation and writing of In Cold Blood, the first non-fiction novel. In Cold Blood is the story of the brutal murder of the Clutter family in rural Kansas on a night in November in 1959. I’ve read In Cold Blood. It’s a hell of a book, the sort of thing that anyone interested in really excellent writing should read. What Capote suggests is that the creation of the book was far more than simple.

We start with the quadruple homicide, followed quickly by the discovery of the story by Truman Capote (Philip Seymour Hoffman). He decides that this is a story he wants to pursue and immediately sets off for Kansas with friend and fellow author Nelle Harper Lee (Catherine Keener) to act as his assistant. Once in Kansas, Capote sets about finding out about how the people of the area are reacting to the crime. He initially discovers a great deal of hostility toward himself, as an outsider looking in at the people of the area. This is especially true of Kansas Bureau of Investigation lead detective Alvin Dewey (Chris Cooper). Eventually, through Dewey’s wife and her love of his novels, Capote manages to start collecting information.

The real break for him comes when the two suspects of the crime are brought into custody and held in cells in the local sheriff’s home. The two men are Dick Hickock (Mark Pellegrino) and Perry Smith (Clifton Collins, Jr.). Capote immediately forms an attachment to Perry Smith, seeing him not only as a kindred spirit due to the similarities of their childhoods, but as something like a victim as much as the Clutter family. He begins spending a great deal of time interviewing Perry and trying to learn about the night in question.

As the court trials and appeals drag on, Capote is lost in the creation of his book, unable to finish it until he knows how everything will finally turn out. He finds himself torn in multiple directions. On the one hand, he wants to save the lives of the two men, particularly Perry Smith. On the other hand, he needs the story to end so that he can finally put the book to bed. This inner conflict takes a toll on everything in his life, particularly his relationship with lover and fellow author Jack Dunphy (Bruce Greenwood).

There are a lot of things that Capote does right. The first is that every part of the story is compelling. In the real world, Truman Capote was right—the story of the senseless murder of the Clutter family both was and is fascinating in the same way that a train crash is fascinating. It’s terrible and awful and unbearable, but at the same time completely enthralling. Similarly, the creation of the book is something that demands to be watched, as does the relationship between Capote and Perry Smith. There’s not a moment of fat to trim from this anywhere.

Additionally, the performances are stand-outs from top to bottom. Clifton Collins, while a relative unknown (although he’s worked pretty steadily since about 1993) is completely believable both as a ruthless killer and as someone far over his head who just wants to be understood and liked. Chris Cooper, in the film for far too short a time, is as good as he ever is, and Catherine Keener is tremendous as well. Bob Balaban, who I also tend to like wherever he shows up, nails the role of New Yorker editor William Shawn. Every role, top to bottom, is dead-on perfect. No one looks like he or she is acting.

But of course the real star here is Hoffman, who plays Truman Capote with a blend of qualities. On the surface, he is brash and blustery, always talking and always the center of attention. But there are real moments here when the scared and lonely man shines through, the person who isn’t sure what to do next and just wants someone else to take things over. Consistently throughout the film, virtually all of Capote’s dialogue is about himself. When people talk about themselves, he tries to demonstrate that he understands by telling a story about his own past. At parties and events, he namedrops, careful to use first names only just so people know how good of a friend he is of famous and influential people.

There’s a great deal to suggest that the reason for In Cold Blood’s importance in the life of Truman Capote wasn’t that it made him a world-famous author or that he essentially invented an entirely new way to write a book. Instead, there are glimpses here, especially at the end, that it’s the first time in his life that he was actually forced to care about someone other than himself and that that person was ultimately taken away from him via state-sanctioned execution.

It would be easy to draw a parallel between the real Truman Capote and the man who plays him in this film. Capote, once In Cold Blood was finished, never wrote much of substance again in his life. The book took that out of him and gave him nothing back. Hoffman is another talent taken too soon by a tormenting demon. There’s tragedy enough here for both of them.

Dammit, Hoffman! You had 30 or more years of performances to give us!

Why to watch Capote: Watch it because it’s great. Watch it for Philip Seymour Hoffman.
Why not to watch: I’ve got nothing here.