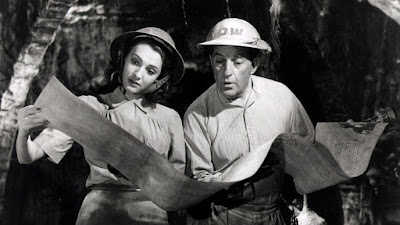 I imagine that when a screenwriter comes up with a truly original idea there is great excitement. Such must have been the case with Passport to Pimlico, a little Ealing comedy of such original idea that watching it unfold is a pure joy. The idea is absolutely one of its time and it doesn’t carry over as well 65 years later. Most viewers won’t really understand what it’s getting at without a little research. The research helped me, at least. It’s funny enough on its own, but the relevance to its time has been lost without attaching it to the history of its time.

In post-war London, a small neighborhood seems relatively ordinary with the common problems of the day; rationing is still going on, desired items are in short supply, and it’s too hot outside for anyone to think straight. A couple of unexploded bombs remain in the neighborhood and are scheduled for demolition. Some boys playing with a tractor tire lose control of it. It rolls down a hole and detonates one of the two bombs. Local merchant Arthur Pemberton (Stanley Holloway) slips into the hole and suffers a bump on the head. He’s certain that he sees something in the gloom, though.

That night, he returns with his daughter Shirley (Barbara Murray) and the pair discovers not only a treasure trove, but an ancient document. Translated, the document reveals that this small area of London was deeded to the Duke of Burgundy hundreds of years before and that the deed has never been rescinded. Essentially, this collection of houses and shops is now the foreign country of Burgundy.

What follows is a comedy of errors as both England and the new Burgundians seek to press whatever advantage they can. One of the first advantages is that as a foreign country, Burgundy is no longer subject to rationing, which allows people to charge in and both buy and sell with impunity. London retaliates by forcing people to go through customs on their return, setting up additional problems with people coming to Burgundy/Pimlico without their passports. Burgundy retaliates by preventing subways from going through their territory.

The two sides go back and forth, with Burgundy using everything it can to maintain its independence. This is assisted by the sudden arrival of the heir to the Burgundy title (Paul Dupuis). When Burgundy runs out of water, they steal it from a nearby fire hydrant. When they run out of food because England has cut them off completely, they are rescued by London citizens tossing food in over the barbed wire fence that now surrounds the neighborhood.

While the problems experienced by the Burgundy citizens are real, Passport to Pimlico is made with its tongue firmly in its cheek. It’s not silly, but it’s intended to be funny, and it generally is. Much of this humor comes through in the dialogue, which is both ridiculous and clever. When the Burgundians are confronted by another attempt to return them to England, Pemberton’s wife Connie (Betty Warren) shouts back, “We always were English, and we’ll always be English, and it’s just because we are English that we’re sticking up for our rights to be Burgundians!” Just as clever and fun is the comment from the local policeman, who, when he hears about the reality of Burgundy, says, “Blimey, I’m a foreigner!”

In addition to the fun script and situation, Passport to Pimlico manages to deal with an event of its time with wit. Essentially, the plight of the Burgundians mirrors the situation of Berlin at the time, and the tossing of food over the barbed wire to the people trapped inside is specifically reminiscent of the Berlin Airlift. It’s supposed to be, although it’s not something I would have thought of without doing a little research. This parallel to the world of the time is what very well might slip through the cracks of a modern viewer. I consider myself pretty well informed of that era, but I didn’t make the connection.

It’s easy to like films made by Ealing Studios. These are never “big” films in the sense of having massive budgets, special effects, or elaborate costuming and sets. Instead, these are films that focus on smaller stories with fantastic scripts. Many of these films are as funny or almost as funny now as they were 60-70 years ago.

I enjoyed the hell out of this film. Its running time is less than 90 minutes, which makes it worth a shot for anyone willing to watch something from the era. You won’t be disappointed. Instead, you’ll more than likely be charmed.

Why to watch Passport to Pimlico: The idea is wildly fun and pulled off beautifully.
Why not to watch: The situation is difficult for a modern audience to understand.