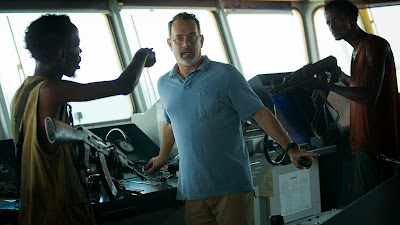 Say “pirate” and most people these days think of Captain Jack Sparrow. In their defense, that’s pretty much what we’ve been trained to think of, and I’m guilty of the same thing. In truth, modern pirates are much closer to how they are depicted in Captain Phillips. They are sweaty, desperate men who are looking to make money. I had mixed feelings going in to Captain Phillips. I often do going into films based on a true story, especially when I know how that story turned out. Some films are able to overcome that, but I’m always skeptical.

Captain Phillips is the story from a couple of years ago when a Maersk ship was attacked by a small group of Somali pirates and the captain, Richard Phillips (played by Tom Hanks) was taken hostage on the lifeboat. Because this is a fairly recent event, it’s not much of a spoiler to say that Richard Phillips made it out alive. What that means for me is, since I know where we’re going to end up and the fate of the pirates, my opinion is going to be based on the performances and the direction more than anything else.

That short summary above is pretty much what happens here. Phillips and the crew of the Maersk Alabama are rounding the Horn of Africa when they find themselves pursued by a pair of four-man skiffs loaded with armed men. They manage to fight off the initial attack with a good bluff by the captain and using the wake of the massive ship to discourage pursuit. The next day, one of the skiffs returns.

This skiff is captained by Muse (Barkhad Abdi). He is accompanied by Bilal (Barkhad Abdirahman), Najee (Faysal Ahmed), and Elmi (Mahat M. Ali). They approach the ship and are initially pushed back by the judicious use of firehoses and steering the larger ship into the skiff, but eventually the pirates get a ladder attached and climb aboard. The crew go into hiding and the pirates confront Phillips. Phillips, trying to keep his crew safe, suggests that they take the $30,000 out of the safe and go, but they want the cargo for the ransom it represents.

As the pirates look for the crew, the crew begins to fight back, leaving broken glass inside a hold and wounding one of the pirates, who is barefoot. The crew also cuts the power, which gives them the opportunity to overpower Muse and attempt to arrange a trade, one captain for the other. Phillips suggests again that they take the money and use the ship’s lifeboat. They do, but take Phillips with them as a hostage.

Since so much time has elapsed now, the U.S. Navy has managed to get a ship in the area and a SEAL team has been alerted and sent to the area. Eventually, the confrontation comes to a head with the life of Phillips and the pirates all hanging in the balance.

Barkhad Abdi had never acted before this film, but he’s a natural and received a Best Supporting Actor nomination for his efforts. I’d suggest that if the film were to receive a second such nomination, it would go to Faysal Ahmed for his wild-eyed portrayal of Najee, who very much comes across as the most dangerous of the four pirates. Tom Hanks is as good as he ever is. A number of people questioned his lack of a nomination here, but I’m not sure I agree. It’s a fine performance overall, but I can’t say I’d put it in Best Actor territory, with perhaps the exception of the last couple of minutes.

I have a tendency to like the films of Paul Greengrass and Captain Phillips is no exception to that rule. The difference between this film and most of the other Greengrass films I’ve seen is that I can’t imagine really wanting to watch this one again. If I’m honest, I’d say the same thing about United 93, but my reasons are different. With United 93, it’s the subject matter itself. With Captain Phillips, it’s that the story itself isn’t really interesting enough for me to care about seeing it again.

It’s a good film. It might even be a great film and I’d love to see what Barkhad Abdi is capable of doing in additional films. I’m just not sure that Oscar might not have been better served by only eight Best Picture nominees this year.

Why to watch Captain Phillips: A story quite literally ripped from the headlines.
Why not to watch: You should already know how it ends, which kind of kills the tension.