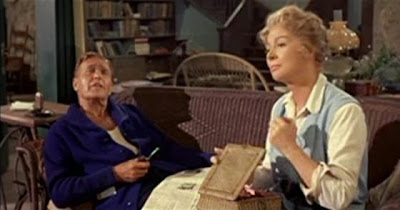 I seem to be watching a lot of biopics lately. That might be coincidence or it might be that a lot of biopics get nominated for various Oscars. In the case of Sunrise at Campobello, the Oscar it was nominated for is not obvious upon watching. If you’d asked me to guess the nomination, I’ve have picked Ralph Bellamy’s portrayal of FDR without hesitation. But, instead we get Greer Garson’s odd version of Eleanor Roosevelt as the nominated performance here.

Instead of looking at FDR’s presidency, Sunrise at Campobello looks instead at his illness. According to legend, Roosevelt suffered from a bout of polio that left him paralyzed, unusual because it happened well into his adult life. That’s the theory the film works with, too. The current belief is that it’s much more likely he suffered from Guillain-Barre syndrome, since it has the same general symptoms, fits more closely with what he did experience, and is much more likely to occur in adults. Regardless, that’s what we’re dealing with here.

The film starts by showing Franklin Roosevelt as a physically active patriarch, going swimming with his four kids. The illness, whether Guillain-Barre or polio, strikes quickly and causes the family to react immediately. In addition to ministrations from Eleanor and his doctors, FDR is visited by his friend, confidant, and political advisor Louis Howe (Hume Cronyn). Eventually, Franklin’s mother Sara (Ann Shoemaker) arrives as well, putting in her two cents.

What’s most interesting here is how the illness is treated not medically but socially. FDR had a burgeoning political career at this point, and his illness was treated as something akin to a social disease. Part of this came from the diagnosis of a child’s disease, but a significant amount of it was the fact that he was afflicted with anything at all. No one could know the extent of the illness and the fact that he was bedridden needed to be hushed up from all prying eyes. In fact, the film implies that even his children weren’t allowed into his sick room.

Anyway, eventually he recuperates enough to go back to New York from the family vacation home and he begins his public life again, albeit in a much reduced manner. He becomes adept with a wheelchair, re-establishes his relationship with his children, and begins working politically again, this time with Eleanor giving the speeches for him. Throughout, he is pushed hard by Howe and pushed against by his mother. The film also suggests that while there were some dark moments of the soul, in general, FDR’s opinion regarding his paralysis was that it would be something he could eventually beat.

The climax of the film comes in the mid-1920s. New York Governor Alfred E. Smith asks FDR to announce Smith’s candidacy for the 1928 presidential election. Roosevelt accepts knowing that this will require that he walk to the podium and stand for at least half an hour giving a speech. This is the triumphant moment of the film, the one that shows the grit and determination of the man who would eventually be elected to the presidency four times.

As I said at the top, after watching this, I was surprised that Ralph Bellamy wasn’t nominated for his portrayal of Franklin Roosevelt. It’s a great performance. Bellamy makes the man instantly likable and sympathetic. It’s easy to root for a guy who seems like a genuinely decent person and who approaches all of his trials with humor. I could say the same thing about Hume Cronyn’s depiction of Louis Howe, which is done with wit and internal fire. Cronyn was forced to constantly wheeze as the asthmatic Howe, and he uses this not to define the performance, but to enhance it.

Instead, the nomination went to Greer Garson for her odd interpretation of Eleanor Roosevelt. In Garson’s world, apparently Eleanor Roosevelt’s voice was Julia Child channeling a British nanny. It was annoying to say the least. Every time she opened her mouth, I wanted her to stop talking. It’s not the character, and it’s not the words. It was specifically the most affected vocal performance I’ve heard in a long time, akin to Dick Van Dyke’s horrendous Mary Poppins Cockney. Skip ahead to just past a minute into this trailer for a taste.

The same can’t be said of Jean Hagen’s portrayal of FDR’s personal secretary Missy Le Hand. While not critical to the overall plot, she provides a normative presence. Sara Roosevelt comes across as an overbearing, overprotective mother far too concerned with her own social station and appearances and not nearly concerned with her son’s life.

This is an oddball of a film. I love it for Cronyn and especially Bellamy. I’m neutral or negative on pretty much everything else.

Why to watch Sunrise at Campobello: An unknown chunk of American history.
Why not to watch: Greer Garson sounds like she got a Julia Childs enema.

Posted by SJHoneywell at 9:02 PM