This is the second in a monthly series of reviews suggested by Nick Jobe at YourFace. 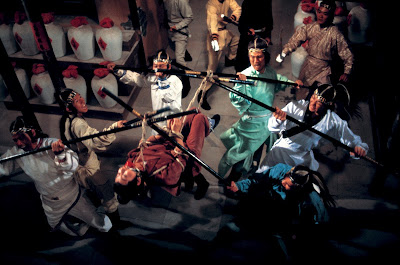 Typically I do a summary of the films I review because I find that a convenient way to discuss many of the things that I’m most interested in talking about here. I like discussing aspects of plot and story and how these things work in the context of the film. With The Eight Diagram Pole Fighter, I don’t have that luxury. Oh, I’m sure there’s a story here; I just don’t know what the hell that story is. There’s something about somebody betraying people and then hunting them down and a guy who escapes and becomes a monk. Or something. I don’t care. You don’t watch this movie for the scintillating wit of the dialogue or the intricacies of the storyline. You watch this because Gordon Liu kicks a significant amount of ass. I’ve watched this, and watched a couple of the fight sequences several times and I still don’t even know what an eight diagram pole fighter is. Again, I don’t care.

Still, even though I’m not sure I actually followed the story, some talk about it is probably a good idea. We have a family of spear fighters. These are the Yangs, who evidently don’t have names. The Yangs are the two parents, seven sons, and two daughters. Rather than having names, they have numbers. The second-oldest son, for instance, is Yang 2 or Second Brother. Anyway, the Yang males are sent to a battle which proves to be an ambush from barbarians who have devised a staff with a flexible end specifically to defeat their spear techniques. The Yang patriarch, Yangs 1-4 and Yang 7 all get capped. Yang 6 returns home, but is insane. Yang 5 (Gordon Liu) is lost and winds up at a monastery.

Here he wishes to become a monk, but he’s still too much in the world. He wishes to train with the monks, but they won’t let him. The monks are bedeviled by wolves, and rather than kill the wolves, they instead train to knock out their teeth. Eventually, 8th Sister Yang goes looking for her lost brother, is followed by the bad guys, and everyone finds each other. A massive fight ensues, and then the film ends.

I’m certain that I’m missing parts of this story here, but I don't think it matters. You won’t either if you watch this. As mentioned above, you go into The Eight Diagram Pole Fighter because you want to see Gordon Liu kick the shit out of people. You leave the film fully aware that you have seen some of the greatest, most intricate fight choreography you will ever see in your life. Seriously, this stuff is epic and there’s nothing else like it.

The last fight sequence, for instance, consists of Yangs 5 and 8 and a group of monks mixing it up with the bad guys. The monks, you may remember, trained for years to knock the teeth out of the marauding wolves. What that means is that as the monks start kicking ass, they don’t kill the bad guys, but repeatedly find different ways to use staves to knock out their choppers. They literally knock their teeth out, and some of the ways this happens are fantastic. This final battle also contains a moment that made me literally start clapping. One of the main bad guys gets stabbed with a broken staff. Yang 5 then hits the end of the staff, knocking it literally through the guy and impaling another guy on the far end. It’s one of the greatest moments I’ve ever seen in a movie.

Look, that’s all this movie is. It’s ignoring anything like story and watching the incredible fight sequences. This is the only way you can watch this. Otherwise, you have to try to make sense of the moments in which Yang 5 fights a bunch of ivy and then beats a pond into submission. Yes, he beats a pond into submission. I have no idea what that means, and yet I watched it happen.

Some people will watch The Eight Diagram Pole Fighter and walk away from it with complaints about story or the intense overacting or any number of things. Fair enough. If you also can’t walk away from it being in complete awe of the fight choreography and the skill needed to put this together, you don’t get to read this blog any more. Go away.

Why to watch The Eight Diagram Pole Fighter: The best fight choreography you will ever see.
Why not to watch: A man beats up a pond, and that’s supposed to make sense.

Posted by SJHoneywell at 4:15 PM