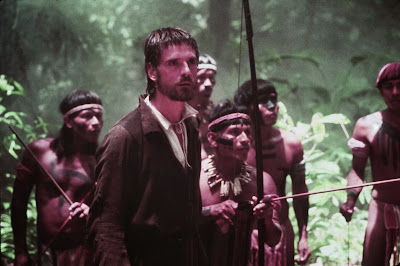 Every now and again, someone gets it into his head that the world needs another religious epic, and for most of the Western world, this means something to inspire the Christian faithful. Thus we have The Mission from 1986, a film that additionally features the not inconsiderable talents of Jeremy Irons, Liam Neeson, and Robert De Niro. Make no mistake—while this isn’t a “greatest story ever told” sort of epic, this is a film about faith and its place in the human story. It depicts the church as something of an evil but faith as a virtue.

The film opens with a look at the world of the South America of the time. Spanish missionaries work to convert the native people of the Amazon. One such missionary attempts to convert the Guarani people who live high up in the forest above the waterfalls and is martyred for his trouble. His martyrdom comes in one of the opening shots; he is tied to a cross and tossed into the river to go over the falls. The Jesuits try again with Father Gabriel (Jeremy Irons), who manages to entrance the Guarani with his oboe. Father Gabriel and his associate Father Fielding (Liam Neeson) build a mission in this high place.

But there is trouble in this paradise, trouble in the form of Rodrigo Mendoza (Robert De Niro), a slaver who finds the area above the falls rich pickings despite the Jesuit mission. Back in civilization, Rodrigo discovers his fiancée in flagrante delicto with his half-brother Felipe (Aidan Quinn). This leads to a duel, Felipe’s death, and Rodrigo’s pardon from the local governor. However, Rodrigo is torn by guilt, perhaps for the first time in his life. Salvation comes from Father Gabriel, who invites him to return with him to the mission, paying penance for his sins. The penance is to drag his armor and weaponry through the jungle and up to the top of the waterfall where the Guarani welcome him and cut the ropes of his burden away from him. It’s not long after this that Rodrigo takes Jesuit orders himself and becomes one with the burgeoning community.

But there is trouble in paradise. The land that the mission stands on has been ceded to Portugal in the Treaty of Madrid. This may seem innocuous, but while Spain’s stance was anti-slavery, Portugal endorsed the practice. As independent Jesuit missions would stand in the way of Portuguese slave trading. To settle the question of the missions, Cardinal Altamirano (Ray McAnally) is sent by the Pope. What he discovers is a place where no decision he makes is correct. If he decides to cede the mission territories to Portugal, he enslaves the people who are newly converted to Christianity. If he keeps the missions free, he risks schism in the Catholic Church and possible destruction of the entire Jesuit order. In the interests of the church, he decides for Portugal, which leads Rodrigo to give up his orders and teach the natives to fight back.

Any film that is going to depict the church in this time period needs to walk a careful line and The Mission does just that. The people who are involved in the church, Rodrigo and Gabriel in particular, are shown not as innocents but as men determined to fight for something they believe in. These are men fighting the good fight in the way most indicated by their beliefs. The secular world is one of corruption and greed, and given the time, this wasn’t terribly far from the truth. Altamirano’s position is unwinnable. He is presented as genuinely sympathetic to the plight of that Guarani, but must act in a way to protect the church above all else. The church, then, is not so much an evil, but something entirely pragmatic.

It would be easy to assume that the film turns on the performance of Robert De Niro, but this is not the case. His role is an important one, and this may be his best unheralded performance, but in truth, the film is truly dependent on the work of Jeremy Irons and Ray McAnally, whose performance is forced to walk a careful moral line.

I’m not sure why this film seems to be as unknown as it is. It’s an extremely effective story beautifully told. It’s not surprising that this won an Oscar for cinematography. The rainforest is gorgeous, and this comes through perfectly on screen.

Put frankly, The Mission is a film that should be seen and loved by more people. It’s a story worth telling and worth watching. This is not an uplifting tale save in the moral sense, and even there, it’s a case of moral victory being all that can be salvaged from the depredations of a world gone made with greed and love of power. In fact, that might be the only thing that can be salvaged in such a world.

Why to watch The Mission: Robert De Niro as a conquistador/slaver? How can you not want to see this?
Why not to watch: It’s pretty heavy on the religious symbolism.