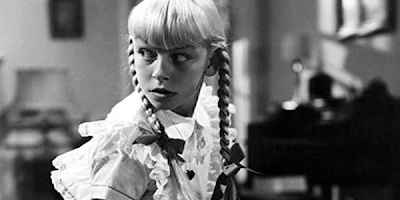 When the topic of creepy movie killers comes up, Rhoda Penmark belongs in the top five. Rhoda is a sociopath, willing to kill anyone for any slight or any other reason she can imagine. She hides her murderous intent behind an overly sweet manner that causes others to find her completely innocent. What makes her special? Two things. First, unlike many a movie serial killer, Rhoda Penmark is eight. Second, unlike many a movie underaged killer, Rhoda Penmark has no touch of the supernatural about her. There’s no vampirism or demonic possession here. She’s just a genuinely evil little girl behind her blond pigtails. And that’s what makes The Bad Seed so interesting.

That paragraph above, in addition to being something like a character study of Rhoda, is also pretty close to a plot summary. We’re introduced to Rhoda Penmark (Patty McCormack) as she says goodbye to her military father, who has been sent off to Washington. Initially, we are given to thinking that Rhoda is very much the perfect child, a little too perfect, perhaps. We learn about the taps she has put on her shoes, her piano lessons, and more. And then, the subject of the penmanship award at school comes up, an award that Rhoda lost to another child. Rhoda’s mother Christine (Nancy Kelly) and the family’s landlord and neighbor Monica Breedlove (Evelyn Varden) don’t consider the award a big deal, but it’s evident that Rhoda is terribly troubled by not winning.

Later that day, news comes from Rhoda’s school picnic that a young child has been drowned. Christine is initially panicked that it is Rhoda, but it turns out to have been the young boy who won the penmanship medal. His body is found with strange crescent-shaped marks on his head and hands. And then the medal shows up in Rhoda’s belongings.

All of this coincides with Christine’s admission to other people in the building that she always believed that she had been adopted. She has had a recurrent dream of being called by a different name and having a different person as her mother. This is a suspicion that is eventually confirmed by her father. More significantly, he reveals that her mother was a notorious serial killer that he had been tracking, and he rescued Christine when her mother vanished.

Christine is now terrified that Rhoda has inherited something terrible, a suspicion that seems to gain weight based on the conversation of another person in the building, Reggie Tasker (Gage Clarke). He tells Christine that there are people who are simply born bad, born essentially without anything like a conscience or the ability to feel empathy. Now Christine is convinced that Rhoda is the bad seed of the title, a child completely incapable of feeling anything for anyone else. A little digging and confrontation of Rhoda trying to drop her shoes into the incinerator leads her to the terrible realization. Rhoda killed the little boy for his penmanship medal. Earlier, several years before, she killed a neighbor because she wanted something the neighbor had promised her in her will. And now, the building janitor is starting to get suspicious of Rhoda, and he has access to the incinerator.

The Bad Seed managed a trio of three acting nominations: Nancy Kelly for Best Actress and both Patty McCormick and Eileen Heckart for Supporting Actress. I haven’t mentioned Eileen Heckart yet, so I will now. She plays Hortense Daigle, the mother of the young boy who drowns. She has only a couple of scenes in the film, but they are both incredibly memorable. Hortense Daigle is consistently drunk in each scene, torn between the intense grief of the loss of her child and the intense anger of not knowing what happened. I wasn’t much impressed with Nancy Kelly initially, but she gets better and better as the film goes on.

Rhoda is incredibly disturbing. Early on, there’s a vibe to her of a child who is overly sweet as a way to ingratiate herself with adults. As we proceed through the film and start to understand exactly what Rhoda is, these moments become horrible. It is from this and from Rhoda’s sudden mood swings that most of the horror comes. Much of this is due to Patty McCormick.

There’s a lot to like about The Bad Seed. There is an overriding problem; the source of Rhoda’s evil. It’s evident that the opinion of the film is that Rhoda is, in fact, the bad seed of the title. She is born bad and her evil is genetic. This touches uncomfortably close to a number of eugenic ideas from earlier in the 20th century. It never goes quite all the way there, but the implication very much is that, more or less, Rhoda’s lack of conscience and her sociopathy is a direct result of Christine’s bad genetics, a pure nature over nurture argument.

Taken to an extreme, that leads to some very ugly places. I’d have like to see some other way to get to Rhoda’s particular evil, but we’re given what we’re given.

I’d like to have seen this version of The Bad Seed follow the original ending, which it does not. That’s strictly because of the Hays Code, which prevented anyone from benefiting from an evil act. That’s a damn shame, because the actual ending of the original story is far more disturbing than the sort of justice we get here.

Still, I can’t help but recommend this one despite some lingering issues. It’s just too good to not watch.

Why to watch The Bad Seed: It’s creepy as all hell in a good way.
Why not to watch: It’s got a weird eugenic vibe to it.