Lady for a Day 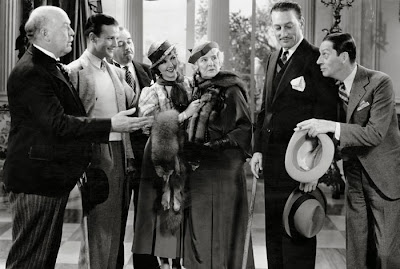 Oh, boy. This is going to be interesting. Lady for a Day is a film that takes a hard turn. Unlike most films, this one takes that turn in the first half hour rather than at the end. There’s no real indication at the start of the film that this is going to turn into a screwball comedy, but that’s precisely where we end up going. Lady for a Day seems to have its heart in the right place, but how it gets there is completely backwards.

We start with Apple Annie (May Robson), a destitute and seedy apple peddler working the streets of New York. The vision we’re given of Annie is not a pleasant one. She spends a good deal of her time two-fisting a huge bottle of booze. She’s got two things going for her. First, she has an in with Dave the Dude (Warren William), a local gambler. The Dude is convinced that he only has luck if he buys one of Annie’s apples. The other thing she has going for her is her daughter Louise (Jean Parker). She hasn’t seen Louise in years since the girl was raised from infancy in a Spanish convent. When she’s not hawking apples, Annie writes letters to her daughter on stationery stolen from a classy hotel.

Annie has constructed a vivid fantasy world to present to her daughter. In this world, she’s not Apple Annie, but Mrs. E. Worthington Manville, society matron. According to the letters, Annie lives a life of parties and receptions, something that will prevent Louise from being embarrassed by her mother. This is all terribly tragic, of course, and it becomes more tragic when the next letter from Louise says that she will be coming to New York with her fiancé Carlos (Barry Norton) and Carlos’s father, Count Romero (Walter Connolly). This sends Annie into a tailspin, because her ruse will suddenly be discovered.

And this is where the turn takes place. Suddenly, Apple Annie becomes a cause celebre among the criminal class and drifters of New York. Realizing that if Annie implodes mentally that his luck will drain away, Dave the Dude takes up her cause. He manages to secure her a room in the fancy hotel and arranges for local pool shark Judge Blake (the great Guy Kibbee) to act as her husband. The ruse works for a bit. When society reporters show up to interview the Count and with questions about the sudden appearance of the unknown Mrs. E. Worthington Manville, Dave has his henchmen kidnap them to keep up the ruse. He then arranges for his girlfriend Missouri Martin (Glenda Farrell) to turn Annie into something presentable, and then arranges for his extended crew to act as society members to pass off to the Count at a reception.

Since this is a film from 1933, and the second two-thirds of it are a straight comedy, the actual ending and whether or not the ruse succeeds shouldn’t be much of a surprise. There are naturally complications with the police along the way, but everyone who is a little bit shady gets what they want because in this case, they were all doing it for the right reasons. The moral structure of the film seems to suggest that lying is a good policy if you’re lying for a good reason. I’m not too sure I’m cool with that.

The Best Actress nomination for May Robson seems out of place as well. There are huge chunks of the film where she is nowhere to be found. Additionally, while this is absolutely a comedy for a large part of the film, Robson is never funny and never a part of the comedy at all. Everything she does in the film is on the dramatic side. My guess is that she got the nomination for her work toward the end of the film, when the ruse is about to be discovered and everything gets pretty weepy. Warren William is much more the heart of this film, and he’s pretty great all the way through. He deserved a nomination far more than May Robson did. So did Guy Kibbee, who, as usual, steals every scene he’s in.

Lady for a Day has a ton of problems beyond this. We learn toward the end that Annie was never married and there’s no real mention of Louise’s father. We have no explanation of how Louise wound up in a Spanish convent. We have no explanation from Annie why she abandoned her daughter in Spain or why her daughter even gives a shit about the mother who abandoned her. Louise and Carlos are complete non-entities and we have no reason to care about them at all. Annie starts the film as a complete train wreck of a human being, but with her hair done and a new wardrobe, everything about her changes—her voice and demeanor change. Essentially, the film says that anyone with the right clothes and coiffure also gets a personality transplant. Perhaps the makers of Pretty Woman watched this, too.

Ultimately, Lady for a Day is a big “so what.” I didn’t hate it, but I can’t claim to have liked it at all.

Why to watch Lady for a Day: Fast-talking crooks and an insane scam.
Why not to watch: The moral of the story is that dishonesty is the best policy.