I like Frank Langella. I liked him early in his career when he was playing in B-level Dracula films, and I like him now that his career has had something of character actor resurgence. There’s a quality to Langella that reminds me somewhat of my father. My dad is a decent guy, but he can be intimidating at times. There are moments with him that feel like a job interview. I get that sort of sense from Langella, that he is somewhat physically imposing, that there would be a sense of always being aware of being in his presence. 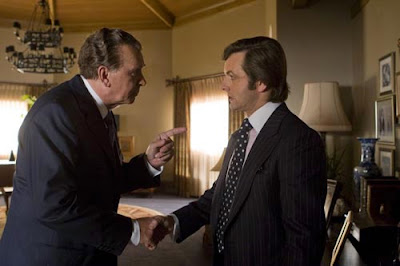 While I like a lot of Langella’s work and a lot of his films (Dave, The Ninth Gate, Good Night and Good Luck), I think Frost/Nixon is his best work. He looks nothing like Richard Nixon, and he does get some of the quality of his voice, but what he really gets is the man’s presence. There is a sense that we’re seeing something like the spirit of the man if not the man himself. Frost/Nixon takes on the story of the unique interviews of Richard Nixon after his presidency by British talk show host David Frost (Michael Sheen).

At the time of the story, Frost’s career was going well in England and Australia, but had fizzled in the United States. He was known as a decent interviewer, but was considered lightweight at best. Nixon, meanwhile, had resigned the presidency in scandal over the Watergate break-ins. Watching Nixon resign gave Frost an idea. He wanted to interview Nixon, score massive ratings, and thus get himself back on American television. For Nixon, the deal seemed too good to be true. He’d have a chance to clear his name by sparring against an interviewer out of his league, and he’d be able to make Frost pay him for the privilege.

One of the more interesting aspects of the film is how Frost deals with not arranging the interview but arranging for someone to show it. All three of the American networks refused to show the interviews. Ultimately, Frost had his entire career riding on the success of the interviews, and with no network willing to foot the bill, he was spending his own money. Frost came up with the idea of syndicating the interviews himself, offering them to whomever wanted them and desperate to find sponsors.

The real centerpiece of Frost/Nixon is the interplay between Richard Nixon and David Frost, and in the case of the film, between Michael Sheen and Frank Langella. The two constantly play off each other, and the relationship between the two men is entirely believable and realistic. These two are greatly benefitted by a fantastic supporting cast. The main part of that cast includes Frost’s support team. These are researchers James Reston, Jr. (Sam Rockwell) and Bob Zelnick (Oliver Platt), his producer John Birt (Matthew Macfadyen), and his girlfriend, Caroline Cushing (Rebecca Hall). Nixon, while not alone, depends greatly on his post-presidential chief of staff, Jack Brennan (Kevin Bacon).

Frost/Nixon is an almost perfect drama in the sense that there is not a bit of action. I don’t think anyone runs more than three steps at a time in the entire film. Voices are raised at times, but rarely. There’s barely a hint of sex and no nudity, and there’s just enough language for the film to have earned an R rating. And despite all of these things that people tend to expect in their dramas (and often want in their dramas), the film is completely compelling from start to finish. A great deal of this, of course, is the performances and the excellent script. Another part of it is that the story and the situation are frankly compelling. It’s also beautifully put together, with a number of smart additions to the play that it is based on.

I’m old enough to remember Watergate, sort of. I have no idea if my parents watched the David Frost interviews or not, but it wouldn’t surprise me if they did. I was certainly too young to get much out of them if they were on in my house. But I’m able to get something out of them now, and this is the sort of film that makes me want to see these interviews. The chess match between the two principle characters is so interesting that I want to see if I can track the same sort of give and take (mostly take) in the actual interviews themselves.

Frost/Nixon trades beautifully on some career-high performances and having one of the most interesting American stories at its heart. If that’s not enough for you, I don’t know what to tell you.

Why to watch Frost/Nixon: It’s a hell of a good story.
Why not to watch: Do you really want to sympathize with Richard Nixon?

Posted by SJHoneywell at 8:12 PM