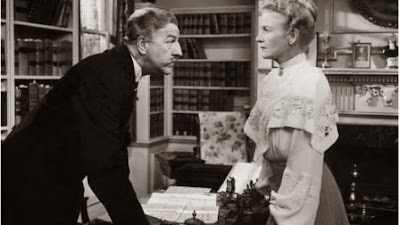 Oh boy. February on TCM is great because every film they show has some connection to the Oscars and many of them are ones that I have trouble locating. With the case of The Magnificent Yankee, there may well be a reason that I have trouble finding someone willing to carry a copy. I won’t say that this is a bad movie, but I will say to my last breath that it’s dull as dishwater.

The Magnificent Yankee is the story of Oliver Wendell Holmes, and more specifically, it’s the story of Holmes when he was a Supreme Court justice. Holmes (Louis Calhern, who created this role on stage) arrives in Washington as a new justice with his wife, Fanny (Ann Harding). He is sworn in, and he makes an arrangement with Harvard to take on a single promising student every year to work as his clerk. Since the Holmeses are without children, this parade of young men becomes, more or less, their children. Holmes certainly takes a father’s pride in the men who operate as his yearly secretaries.

Holmes offers opinions on cases and sometimes butts heads with Adams (Ian Wolfe), a descendant of the Adamses who were instrumental in the creation of the country. He also deals at times with his friend Louis Brandeis (Eduard Franz), who eventually joins him on the Court. Also appearing at times is Owen Wister (Philip Ober), who also narrates the film in places.

Eventually, Fanny dies. Then Holmes retires from the court in his 90s when he realizes he no longer has the ability to render decisions on the cases that come across his desk. And then the film ends. Really, that’s it. It’s the compressed story of a Supreme Court justice concerning his time on the bench and ending shortly before his death. Throughout all of this, the family maidservant Annie (Edith Evanson) remains a constant in the residence.

Any reader familiar with this site knows that I favor longer reviews and that I’ve managed to get close to 1000 words on films that offered very little in terms of narrative structure or plot. That’s probably not going to be the case with The Magnificent Yankee, since I feel like I’ve covered the entire film already. This is a film where nothing happens. Brief problems crop up here and there and are dealt with immediately. Brandeis, a Jew, has trouble initially being confirmed on the bench. And then it happens. Brandeis and Holmes frequently disagree with the rest of the court. Eventually the court comes around to their way of thinking. Fanny dies and Holmes is sad.

I guess that’s my issue here. It’s a biopic that doesn’t seem to attempt to do anything other than just show the man and touch a little bit on his career, and it doesn’t even really do that much. Calhern plays Holmes as a nice guy, the sort of person it would be fun to bump into or have a drink with. It’s a fine performance. It just doesn’t go anywhere.

Frankly, I was pretty bored by this. That’s not something I like to say, but it’s absolutely the case here. Calhern’s performance is fine, as is Ann Harding’s. They work well together on screen. But there’s nothing here worth seeing, and at 89 minutes, it still felt like half an hour too much.

Why to watch The Magnificent Yankee: It tells of a unique life.
Why not to watch: Nothing happens.