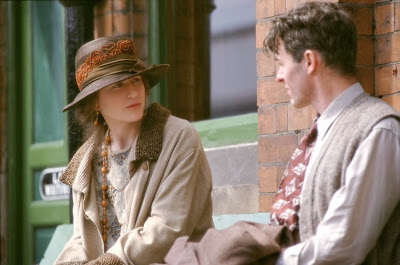 With a film like The Hours, I’m not sure where to start. I’m honestly lost for a good way to even start writing about this. Do I discuss the interwoven story that carefully builds up connections between three different women in three different times, each life being shaped by the lives that came before? Do I go with the incredibly performances? The magnificent screenplay that not only makes these stories easy to follow but also produces some of the most powerful and best female roles of the last 20 years? There are so many places I could go that I’m lost on where to start. It’s an embarrassment of riches.

The Hours tells three stories at the same time. The first concerns author Virginia Woolf (Nicole Kidman) as she attempts to write her novel Mrs. Dalloway in the 1920s. The second story takes place in the 1950s as a housewife named Laura Brown (Julianne Moore) deals with thoughts of suicide while reading Woolf’s novel. In the third story, Clarissa Vaughn (Meryl Streep) has a day that mirrors that of the protagonist of Woolf’s novel as she plans a party for a friend and former lover who has been given a prestigious award.

These stories are not shown in sequence, but are intertwined, each playing out in pieces as we watch. Just as we see them all at the same time, the stories seem to influence each other, with events in one being mirrored in one or both of the others. All three, for instance, deal with thoughts and instances of suicide. Woolf herself was frequently suicidal (and eventually did kill herself); Laura in the second story is also a suicide risk, and Clarissa’s friend Richard Brown (Ed Harris), suffering from AIDS and convinced he is being honored only because he is dying, is a suicide threat as well. We learn eventually that Richard Brown is the son of Laura Brown in the second story, that her son Richie (Jack Rovello) grows up to be Richard.

Woolf’s story is mildly interesting. She suffers through a visit from her sister (Miranda Richardson) and deals with what to do with the protagonist of her new book. She also struggles with her fear of her own servants, who bully her somewhat, and with her bipolar disorder. Not nearly enough for a film on its own, this story serves as a necessary backbone for the rest of the film. Clarissa’s story is one that probably could stand on its own. In many ways, she is the Mrs. Dalloway of Woolf’s book, following her schedule from the book. Clarissa’s unusual relationship with Richard—the two had been lovers but are now both openly gay—is central to this story and to Clarissa’s sense of identity. Richard’s opinion of her colors every experience and encounter she has, causing her to break down, especially in front of Lewis (Jeff Daniels), another of Richard’s former lovers.

It is in the middle story that the film finds its weakest point. This has nothing to do with the performance by Julianne Moore (she was Oscar-nominated for Best Supporting Actress) or with John C. Reilly who plays her husband. It’s worth noting that Moore was nominated both for that award and for Best Actress in Far from Heaven the same year. Reilly was in two of the five films nominated for Best Picture. The fault is not with them, but with this part of the story itself. We’re left to intuit why Laura is suicidal, and we’re not really given much of a reason beyond existential despair and ennui. We’re given nothing tangible as to why she has suicidal thoughts until the end of the film when that story has already been completed. Before that, we’re left to guess for ourselves what would drive her to that point.

Much of the success of the film rests on the shoulders of Kidman as Woolf. For starters, I almost didn’t recognize her in the non-glamorous role—this film was, after all, made before plastic surgery and botox pulled her skin taut. Generally understated as befits someone playing a woman caught in the throes of dealing with her own mental illness, Kidman is spectacular. Ed Harris, nominated as well, has only a couple of scenes but is memorable in the first and riveting in the second.

The Hours is the sort of film that makes me wonder why roles like this can’t be written for women more often. The talent in terms of the actors is there—it’s mildly surprising Meryl Streep wasn’t nominated herself—and it’s evident that films with a number of solid women’s roles are compelling enough to find an audience. Is it that Hollywood continues to believe that a film in which women are the central characters simply isn’t enough for a mainstream audience? I don’t know.

Why to watch The Hours: It’s holy-shit good.
Why not to watch: The middle story falters.