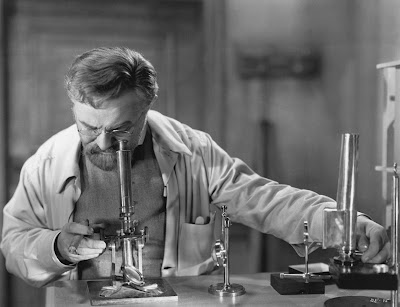 Every now and then, it’s fun to be really surprised by an actor’s range. I went into Dr. Ehrlich’s Magic Bullet as someone comfortable with seeing Edward G. Robinson on the screen. When I think of Robinson, I think of a particular character type. Specifically, I think of a guy with a bit of a Napoleon complex, tougher than his size might indicate, and not willing to take crap from anyone. That’s who he played as a bad guy (Little Caesar) and it’s who he played as a good guy (Double Indemnity). So what a revelation to see him in a film like this one.

Dr. Ehrlich’s Magic Bullet is a film that barely made it past the Hays Code, since it’s about the creation of the vaccine to cure syphilis. According to the Code, making a venereal disease one of the main plot points of a film was a big no-no. It took some convincing to allow the film to be made, and it was a bit of a tap dance that involved saying that the syphilis part was only a minor aspect of the actual plot. It’s not the whole film, but it is pretty much the entire third act.

We start with Dr. Paul Ehrlich (Edward G. Robinson), a hospital doctor in Germany. His heart really isn’t in the job, though. He’s far more interested in research and his own experiments and tends to be extremely frustrated with the red tape of the hospital setting. His main project is in creating a series of different stains for highlighting bacteria and parts of cells on slides. Everything eventually works out when he is released from his job for constantly failing to follow the rules and is simultaneously tasked with finding a stain that will allow for tuberculosis bacteria to be seen on a slide without staining everything else the same color. After a number of trials and errors, he gets a dye to work, but also contracts tuberculosis.

His success lands him a new job and a long stay in Egypt to overcome his illness. While there, he meets a man who is able to be bitten by snakes and survive. This leads him to a new way of thinking—is it possible that the man built up immunity to the snake’s venom by repeated bites? He returns to his lab and starts to work on this, and eventually uses this technique to create a serum to cure a diphtheria epidemic.

Creating such sera, which he calls “magic bullets,” becomes the new work of Ehrlich and his lab. Unfortunately, the medical board believes that Ehrlich’s work has no practical use. Part of this is that after the diphtheria cure there are no other immediate breakthroughs, and part of this is the growing sense of anti-Semitism in Germany, although this is before World War I. With his funding cut, Ehrlich is forced into private funding. Eventually, he becomes interested in finding a cure for syphilis, since the bacterium is similar to another one he was working with. He knows that arsenic kills the bacteria, but it also kills or drives the experimental animals insane. He and his colleagues attempt to create a serum that kills the disease without driving the patients mad. Eventually they do, but it comes at a cost: some of the patients who receive the serum die from arsenic poisoning, which leads to an eventual trial.

That’s the story we’re given, and while I haven’t done a great deal of investigation on the life of the real Paul Ehrlich, it would seem that much of the film is pretty accurate. At least the broad strokes of the story are the real thing. Ehrlich got his start developing stains for slides, did help cure a diphtheria epidemic in the manner depicted, and eventually won a Nobel Peace Prize for his work in immunity research in 1908. So, while there may be some dramatization (I found no evidence of the trial), at least the bulk of the story is the real thing.

What was most interesting for me was Edward G. Robinson. I’m used to seeing him as a tough guy, and while Ehrlich is by no means a shrinking violet here, this is a very different role for him. He’s all but unrecognizable behind the beard and glasses. If I hadn’t known it was Robinson, I’d have never guessed it was him in the role. It’s a tremendous job of acting, and shows a real versatility that I was unaware he possessed as an actor.

Perhaps the biggest problem here is that the film isn’t particularly exciting. I say that not for it being a problem for me, but as a potential problem for others. A great deal of the film is men standing around in lab coats talking about injecting diphtheria into a horse to create a serum. I found it pretty interesting, but I can definitely see other people not finding a lot here to love.

I liked it, though. I went into this one completely cold, and I’m happy I got a chance to see it.

Why to watch Dr. Ehrlich’s Magic Bullet: It’s based on a true story, and it’s a pretty interesting story.
Why not to watch: The ending is a little too on the nose.

Posted by SJHoneywell at 7:57 PM