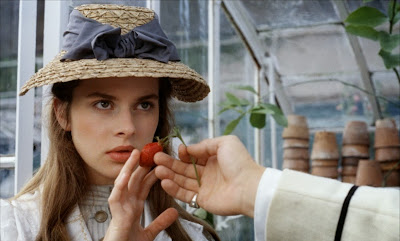 One of these days, smart filmmakers will devise something other than rape to serve as a crisis for women in a story. Oh, I understand that this happens on occasion, but there are times when it feels like “rape” is one of the most frequently written words on this blog. There’s only so much of it I can take before I’ve have enough. And when the topic is rape, I get to “enough” pretty quickly. In the world of film, “creepy rapist” is an occupation. And when the director is Roman Polanski, as with Tess, “creepy rapist” takes on new meaning. For added weirdness, Polanski made the film and dedicated it to Sharon Tate, his murdered wife, who had wanted him to make the film with her in the lead role.

Tess is the nearly three-hour epic version of Thomas Hardy’s Tess of the d’Urbervilles, set at the end of the 19th century and concerning the young and pretty Tess Durbyfield (Nastassja Kinski). Tess is the daughter of John Durbyfield, who discovers that he is descended from the d’Urbervilles, a noble family with lineage extending back to William the Conqueror. However, the d’Urbervilles are all but gone with the male line having vanished. Interested in both the potential monetary gain and prestige, he sends Tess off to a local family with the same last name in hopes of being accepted.

She is, in a manner of speaking. She immediately becomes the object of obsession of her “cousin,” Alec d’Urberville (Leigh Lawson). Alec eventually pushes himself on Tess and (wait for it) rapes her, getting her pregnant. She returns home in shame and has the baby, who is born sickly and eventually dies. In the religious spirit of the time, the infant’s death means that Tess was complicit in her crime because otherwise the baby would have survived.

Anyway, eventually Tess goes off to be a milkmaid where she meets Angel Clare (Peter Firth), a noble young man trying to learn how to be a farmer. He falls hard for Tess and marries her and everything is peachy until she confesses her past to him. Since he believed her to be an unspoiled innocent, he rejects her and runs off to Brazil without her. This leaves Tess abandoned and when her father dies, she is forced to resume her relationship with Alec. And then Angel returns, having completely shit the bed in Brazil and discovers that the woman who is still his wife is now having regular sex with the man who raped her and spoiled her for him. Isn’t this a happy tale? See, it’s all supposed to be sort of okay because the current d’Urbervilles bought the name and title, so Tess isn’t actually related to Alec.

And what we then have is one of those things where I have to split my judgment of the film. I won’t suggest for a second that Tess isn’t well-made. It is. It’s a beautiful film, lush and gorgeous and filled with the sort of technical brilliance that wins Oscars (as this did) for cinematography, set design, and costuming. But beyond that, it’s a spiritually ugly film, on that made me feel ugly watching it. Tess has a bunch of terrible things happen to her that are completely beyond her control and is then made to pay a series of terrible prices for it.

It’s also a film that has a mentality not too far off from The Color Purple. If you haven’t read that particular review of mine, I’ll sum it up for you—the central tenet of that film (and this one) is that men are shits. All of ‘em. Tess’s father is a drunk and mostly worthless, Alec d’Urberville is a creepy rapist, and Angel Clare, after admitting his own romantic indiscretions of the past, tosses Tess aside for one that wasn’t even her fault. To hell with all of them, and to hell with a movie that puts forth this belief system. Yeah, I said it and I’ll say it again if I have to. Tess may have been unable to fight back against the forces arrayed against her, but I don’t have to be that passive. Tell me that my gender is shit, and I’ll fight you on it. I’ll especially fight you on it when the person suggesting that can’t come back into this country because of statutory rape charges. Kiss my ass, Polanski.

And so, Tess is a lovely film to look at but not one that is very lovely to experience. And with a running time that clocks in at just under three hours, it’s not an experience that one gets to get through very quickly. I can’t imagine wanting to watch it again. Seeing someone be a victim for that long isn’t the kind of thing that gets me out of bed.

As for Nastassja Kinski, Tess was her first major role, although she had a few before this. She was 18 or 19 when she made this film. Her job was to look beautiful and be tragic. She managed both with a certain level of aplomb. I think I recall her having an odd reputation years ago, and I wonder how much of that was due to her arguably psychotic father. Regardless, she handles this role pretty well.

Why to watch Tess: It’s gorgeous to look at
Why not to watch: It’s shitty to experience.