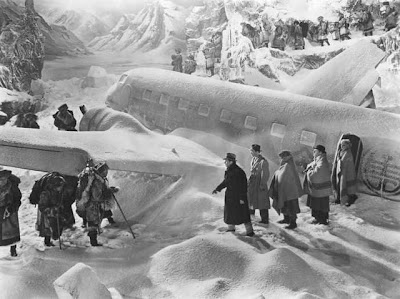 I wasn’t too keen on Lost Horizon showing up at my door. On the 1001 Movies list, four of the entries were also included in the “50 Worst Films of All Time” book that my brother Tom had, and I at least disliked all of them and hated several. I was under the impression that Lost Horizon was a part of that book, too. It is, but it’s the version from 1973, not this one. Let me tell you, that was a significant relief on my part. I’m hoping to be done with anything that was in Medved’s book.

So this is not that film. In this one, a group of Westerners are attempting to leave China on the eve of the Japanese invasion. Of particular interest is Robert “Bob” Conway (Ronald Colman), who has worked for the British Foreign Office for years. His brother George (John Howard) is convinced that he is about to be named the new Foreign Minister. Why else would the British have assigned a ship to him, awaiting his arrival in Shanghai? Eventually, the brothers climb aboard a final plane with three other potential refugees. These are a paleontologist named Lovett (Edward Everett Horton) , a mystery man named Barnard (Thomas Mitchell), and a sickly woman named Gloria (Isabel Jewell). They discover mid-way through their flight to Shanghai that they have, in fact, been shanghaied and are instead heading in the wrong direction.

Eventually, the plane crashes and the pilot dies in the crash, leaving the five stranded in the Himalayas until they are rescued by group from a nearby monastery. This group is led by a man named Chang (H.B. Warner), who leads them back to a place called Shangri-La. This is a valley hidden in the mountains with perfect weather despite being high in snow-capped mountains. Bob Conway finds the environment of peace and beauty to be soothing to him, but the other four begin to chafe at what they believe is something like imprisonment. See, Shangri-La is completely isolated, with no real ability to contact the outside world.

As it happens, Shangri-La is truly a magical place that truly is a place of peace. In essence, it’s as close as possible to a human conception of heaven. Additionally, life is extended within the confines of Shangri-La to extreme degrees. Eventually, Conway is introduced to the High Lama (Sam Jaffe), who is well over two hundred years old. The Lama tells Conway that he was brought to Shangri-La specifically because one member of the society, Sondra (Jane Wyatt), believes that he will fit well in their society.

Slowly, most of the others start to become more and more accustomed to the place and begin to like it. Gloria, who had been deathly ill, is suddenly in the pink of health thanks to the atmosphere. The only exception is George, who wants desperately to get back to the outside world and wants desperately to bring Maria (Margo) along with him. But Bob wants to stay with Sondra and life out a life of hundreds of years in the calm and peace of this new world he has discovered.

There are some very interesting things in Lost Horizon. While on the surface, the overriding philosophy of Shangri-La seems very Eastern, in this incarnation, the man who started the place was a Christian clergyman with hopes that eventually the philosophy of Christian peace and tranquility will encompass the entire world. Further, it’s an interesting piece of philosophy for the years just before World War II. A futile dream, as it turned out, but one that is perhaps more beautiful because of its futility.

The original version of Lost Horizon was around 132 minutes. Seven minutes of it were lost, so in this version, those seven minutes for which the sound existed but the video did not were replaced here with stills. There are other places here that desperately need to be restored, and the restoration is very much worthwhile.

I didn’t really expect a lot from Lost Horizon, and I was pleasingly surprised with what I got. It may be a bit sappy at times, but it’s a sappiness that is made in earnest and without much guile. The film espouses a philosophy that is easy to dismiss, and that is perfectly in line with virtually everything Frank Capra ever did. But buying into that philosophy, if only for the length of the film, is worthwhile. It pays to approach this with a touch of naivety, if only to experience it as the dream it sort of is. The ending is pure Hollywood, too, and so help me, it works.

Sure, not everything works. So what? Lost Horizon has its heart in the right place. And really, no film that features both Thomas Mitchell and Edward Everett Horton could really be bad, could it?

As a final note, I was mildly surprised to see nudity in this. Oh, not much and it was distant, but there is a scene where Jane Wyatt goes for a nude swim and is seen exiting the water. I didn’t think those things happened in 1937 films.

Why to watch Lost Horizon: Fantasy and romance that only the pre-war years could give us.
Why not to watch: It’s a bit too long for the story it tells..