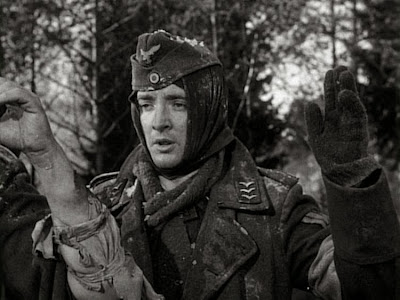 I think I’ve mentioned before that when I was a kid, war films were my favorite genre of film. I watched other films, but war films were what I loved the best. Decision before Dawn is one that I missed until recently. This is another film where I enjoyed it while I was watching, but when it comes to the end and it’s time to write about it, I don’t know what to say.

On the surface, this is a pretty standard World War II picture pitting the Allied forces against the remnants of Germany toward the end of the fighting in Europe. Allied troops marching across the continent are still encountering resistance, of course, and are naturally doing everything they can to capture enemy troops and end the war as quickly as possible. One of those things they are doing is recruiting captured German soldiers to operate as spies behind enemy lines. It’s obvious that Germany will lose at this point, so ending the war as quickly as possible has become a priority.

The newcomer to the military intelligence corps is a communications officer named Lieutenant Rennick (Richard Basehart), who tries to get himself up to speed as quickly as possible, but he still can’t bring himself to trust the German traitors who are working for his section. When word comes in that a German general wants to surrender and bring his entire corps with him, the team needs to act quickly. Rennick is assigned to rendezvous with the general, and is assigned a pair of German traitors to assist him. One of these is Rudolph Barth (Hans Christian Blech), codenamed Tiger. Tiger is assigned because he knows the area, but he is considered untrustworthy because his partner was killed on his last assignment.

The other assignee is Karl Maurer (Oskar Werner), a new recruit codenamed Happy, which seems to have been given him ironically. Happy has joined up for pure idealism—he sees the companion captured with him killed by other German prisoners for doubting that Germany will eventually win the war. Wanting an end to the bloodshed, Happy decides to do everything he can to help bring the war to an end. His assignment is to discover the location of the 11th Panzer Division, since they may act to prevent the general’s surrender.

We spend the bulk of the film with Happy as he searches for information regarding the 11th Panzer. As he wanders through Germany after parachuting in, he encounters people in a variety of mental and emotional states. Some, like a courier named Scholtz (Wilfred Seyfirth), are still convinced that Germany will win the war and will brook no dissention from that view. Others, like widow Hilde (Hildegard Knef), just want it all to be over. Happy slips up when speaking with Scholtz about his experience in France and calls Alsace a French territory.

Happy, a former medic, is recruited as the temporary medic for the commander of the very Panzer group he is looking for. The leader, Oberst von Ecker (O.E. Hasse), is ill, and Happy has the chance to kill him with a lethal injection, but avoids it. However, his earlier run-in with Scholtz has managed to get Maurer’s cover name put on the Gestapo’s list of suspected spies. He’s forced to run and go off his script and locate Rennick and Tiger to tell them the location of the Panzer division.

And that’s really it. This is an oddball of a film. I very much wanted to like it, but I don’t really understand what it was. My guess is that there was some desire to reform the German image by giving us Happy as a German who wasn’t a Nazi and was willing to work with the Americans to end the war. Oskar Werner, blonde and Germanic, was perhaps the ideal choice for this role. He was both a pacifist in real life and he couldn’t have possibly looked more like the idealized version of a German.

The story is a good one. I just couldn’t really get into it. It’s probably a better movie than I’m giving it credit for being, but something about it left me cold. I should probably give it another shot some day.

Perhaps the German people did need something like this to start reforming their image in some way. The Berlin Airlift had already happened by this point, so there was some positive propaganda at least for West Germany. Maybe something more was needed and this was it. I’m just not sure why.

I’m rambling. I’ll stop now. Like I said, this is probably a better film than I’m suggesting. It just hit me wrong.

Why to watch Decision before Dawn: A pretty good war story.
Why not to watch: It doesn’t really set out to do what it wants.