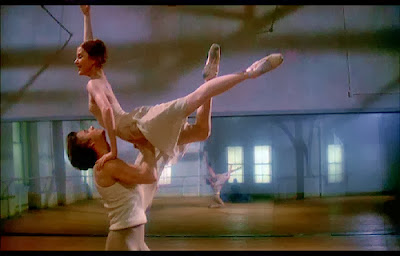 I might be surprising a number of people with this review. Musicals generally aren’t my thing, but The Turning Point isn’t a musical, but a dance film, and specifically a ballet film. I’m certain I’ve mentioned my tenuous ballet connection here before; it’s the one section of the Arts that I actually know something of thanks to my daughters. And while The Turning Point is a ballet movie, it’s also a drama. In fact, it’s kind of unfair to call it a ballet movie. It is one in the same way that Field of Dreams is a baseball movie. This is a film about relationships and people seen through the lens of a ballet company. It’s impossible to divorce the story from the dance, but this is in no manner a film about dancing.

I admit that I was mildly worried at the outset because of the presence of Shirley MacLaine, who tends to come off in many of her roles as completely neurotic. It’s unfair of me to prejudge in this way, but also virtually impossible for me not to. I’ve seen too many neurotic Shirley MacLaine performances to go into a film like this with my eyes closed. And, it’s about dancers, and she plays a former dancer/current dance teacher, and I can tell you from personal experience that dancers in general and ballet dancers in specific have their own patented brand of neurosis.

Instead of being a story about dancing, The Turning Point is a film about both friendship and jealousy told through this lens. Deedee (MacLaine) is a former dancer from the American Ballet Company (based I’m guessing in part on the American Ballet Theatre, many of whose members appear as extras). She left the company years before to raise a family with her husband and fellow former company member Wayne (Tom Skerritt). They now live in Oklahoma City where they raise their three children. Their oldest, Emilia (Leslie Browne), is pursuing her own career in ballet. Younger daughter Janina (Lisa Lucas) does not care much for dancing and instead runs the household. Son Ethan (Phillip Saunders) splits time between ballet and baseball.

And then, one day the ABC arrives in Oklahoma City, which means a reunion for Deedee, Wayne, and their old friends. In particular, this is a reunion for Deedee and old friend and rival Emma (Anne Bancroft). Emma has been with the company for years as a prima ballerina, but her time in the spotlight is coming to an end. At a reception after the company’s performance in Oklahoma City, the two women reveal to each other that they are in some respects jealous of the other’s life. Deedee gave up her career to raise a family while Emma discovers her life is completely empty once her career has reached its twilight.

These rivalries are continued when ABC decides, in no small part because of pressure from Emma, that young Emilia is perfect for the company and should come join before the next season. And so Emilia heads off to New York with Ethan and her mother in tow. Emilia immediately falls for Russian prodigy and ladies’ man Yuri (Mikhail Baryshnikov) while Deedee rekindles an old flame in the form of conductor Rosie (Anthony Zerbe).

So I’ve said this isn’t a dance film, but it’s impossible not to talk about the dancing here. This is a film that features the work of Mikhail Baryshnikov, and even if the film itself was terrible, it would be worth watching for the opportunity to see him on stage. Fortunately, the film itself is a good one, and uses the dance performances to enhance the story rather than substitute for the story. The Turning Point shares the dubious distinction with The Color Purple of holding the record for Oscar nominations (11) without a single win. Four of those nominations were for acting: Bancroft, MacLaine (both for Best Actress), Browne, and Baryshnikov (both in supporting roles). Browne seemed like an odd choice to me until she discovers Yuri’s particular brand of infidelity and shows up for a performance drunk. Her line readings are often pretty wooden, but she’s not bad.

Where The Turning Point succeeds is that it maintains that it is not a film about dance or dancers, but about people who happen to be dancers. The drama is a good one and relatable by anyone rather than just by those who live in a more artistic community. It helps that the film is smart enough to use dance well. Anne Bancroft had no dance experience, and the film covers this up by having her strike poses rather than actually dance. It works very well.

I’m surprised I liked this as much as I did. It’s a damn fine film, and most of its nominations were well deserved. Anne Bancroft and Shirley MacLaine are especially good and Baryshnikov is particularly good in his first acting role. And really, even if you don’t like the story much, the ballet is pretty great.