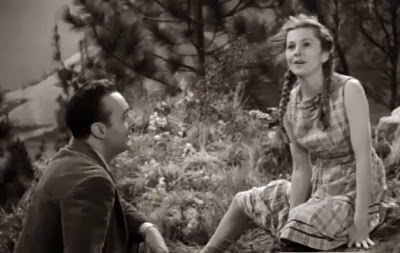 There are stories that change dramatically in how they are seen over time. What seems normal for one era becomes bizarre or even disturbing for another. Such is the case with The Constant Nymph, which goes the Lolita route a decade and a half before Kubrick’s Lolita and plays things straight, not a hint of comedy. This may well have been the poignant story of a young girl madly in love with an older man in 1948, but seen today, the love comes off more as obsession. For what it’s worth, the obsession does come off as realistic. A great deal of that is thanks to Joan Fontaine.

A composer named Lewis Dodd (Charles Boyer) has received unkind notices on his latest composition. He decides to get away for a bit and goes to visit his friend and fellow composer Albert Sanger (Montagu Love), who lives with his third or fourth wife and multiple daughters in a Swiss chalet. Dodd is a frequent guest and everyone knows and loves him. This is especially true of Tessa Sanger (Joan Fontaine), Albert’s 14-year-old daughter. Evidently unknown to everyone but obvious to anyone, Tessa is madly in love with Dodd, and it’s evident that the two have some level of spiritual connection. For Dodd, this is not romantic, but for Tessa, it is the stuff that romantic dreams are made of.

When Albert Sanger dies suddenly, it throws the Sanger clan into panic. The latest wife has no interest in raising the daughters, so a family cousin, Charles Creighton (Charles Coburn) shows up with his adult daughter Florence (Alexis Smith) to take things in hand. With one of the Sanger daughters married off to a theater owner and family friend named Fritz (Peter Lorre), something needs to be done with the younger ones. It is determined that they will return with Creighton to England and go to finishing school. Meanwhile, Florence and Lewis Dodd make goo-goo eyes at each other and get engaged, heartbreaking Tessa.

“Heartbreaking Tessa” is important here, because we slowly learn that poor Tessa has a heart condition. It’s never fully explained to us, but excitement or stress causes her to faint because her heart can’t take the strain. Being separated from Lewis Dodd is a part of that strain. Realizing that Lewis isn’t deliriously happy in his marriage is another part. And he’s not. Florence wants him to be charming and witty and social and all he really wants to do is work on his music. Thus Tessa and her sister run away from school, causing additional problems. And then, finally, someone starts to notice Tessa’s obsession with Lewis and the connection the two seem to have.

Tessa’s medical condition is one of the issues I have with The Constant Nymph. It’s only mildly explained in the course of the film and only really seems to affect Tessa when the plot requires it. I’m not saying I want a full medical history on the girl, but having something that would better explain exactly what is wrong with her would make the film make a lot more sense.

That’s only a minor problem, though. The biggest issue I have here is the weird love triangle. Both Tessa and Florence are in love with Lewis, although Tessa’s love is far closer to unhealthy obsession. But that’s not really the way we’re supposed to believe things are happening. Instead, the film gives the impression that we’re supposed to think of Tessa’s love for Lewis as something pure and untainted. Maybe it came across that way 60 years ago, but it doesn’t now. Things are even more disturbing when it comes to Lewis. Again, we’re led to believe that Lewis may not truly love Florence, or at least isn’t “in love” with her because the two fight at times and because he’s uninterested in her social butterfly ways. I see him instead as a man who probably does love her, but is so involved in his own work that she merely isn’t the most important thing in his life.

It’s that Lewis evidently reciprocates Tessa’s feelings where I have a real issue. And it’s Florence’s evident acceptance of this that really creeps me out. I know Tessa is played by a 24-year-old Joan Fontaine here, but the character is 14.

Charles Coburn is a bright spot as the comic relief. I love that he can’t ever get the pronunciation of the servant Roberto correct. After learning that the man’s name is Robert, he starts calling him Robert-o, which I find funnier than I probably should.

I didn’t dislike The Constant Nymph, and I even liked parts of the story pretty well. The performances are very good throughout. But I don’t love it and probably never will.

It’s worth noting that this was a real rarity of a film until quite recently. Margaret Kennedy, the author of the original novel, stipulated in her will that after the film’s theatrical run, it could only be displayed in museums and at universities. It wasn’t until a couple of years ago that TCM managed to acquire the rights to show it. That alone makes any viewing of it something worth seeking out.

Why to watch The Constant Nymph: Joan Fontaine gives a great performance.
Why not to watch: The ending is pretty creepy.