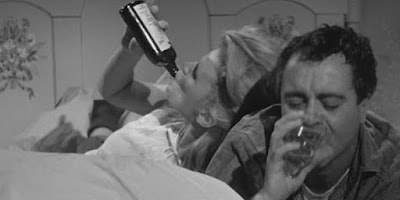 I’m not a drinker. Oh, I’ll have the occasional drink, but rarely more than one and almost never more than two in a given month. Alcoholism doesn’t run in my family—it sprints and sometimes does the high hurdles. It’s just better if I avoid it in general. That being said, I find movies about addiction fascinating, which makes Days of Wine and Roses a film of particular interest for me. It benefits from a good main cast and from a realistic depiction of alcoholism. This is not a happy film, but it is a very good one that probably should have been nominated for more Oscars than it ultimately was.

Joe Clay (Jack Lemmon) works as a public relations man. A lot of his job appears to be finding attractive young women to hang out with his clients. Because of this, and as a part of his job herding these young women around, Joe drinks a great deal. One night, he meets Kirsten Arnesen (Lee Remick), the secretary for one of Joe’s clients. Joe is immediately attracted to Kirsten, but she doesn’t seem to be that interested in him. He does manage to get her out to dinner, and even though she doesn’t drink, they hit it off. Joe even manages to find a drink that she likes—brandy Alexanders—because of their chocolate content.

Romance ensues, and both Joe and Kirsten continue to drink. One night, the pair show up at Kirsten’s father’s plant nursery to introduce Joe to Ellis Arnesen (Charles Bickford). Ellis isn’t too keen on what Joe does for a living and seems cold to the idea that he and Kirsten have shown up not just for the introduction but to announce that they are married. Soon enough Joe and Kirsten have a daughter and both are not merely still drinking, but drinking almost constantly.

Naturally, this sort of lifestyle can’t continue. Joe gets demoted to lesser and lesser accounts and is eventually let go while Kirsten sits at home and gets drunk on her own, eventually setting fire to their apartment and endangering daughter Debbie. Joe goes from job to job, blaming his regular firings on office politics when the real reason is his drinking. Thinking he’s hit bottom, he has an epiphany moment seeing his own reflection in a bar window and decides that he and Kirsten need to get clean. They show up at Ellis’s nursery and go to work for him, spending two months sober. Those two months are blown in a single night’s drinking binge that ends with Joe destroying a number of plants looking for a hidden bottle of alcohol.

Detox for Joe follows, and so does AA with sponsor Jim Hungerford (Jack Klugman), and relapses when he tries to reconnect with Kirsten, who refuses to admit her own alcoholism. What follows concerns the different trajectories of Joe and Kirsten, recovery and denial.

There’s a lot of interesting things going on in Days of Wine and Roses. It’s directed by Blake Edwards, who is far better known as a director of comedies like The Pink Panther. Lemmon was also better known for comedies and for comedic roles. Days of Wine and Roses gave them both the opportunity to demonstrate some real dramatic chops. Lemmon is truly brilliant casting at this point in his career. As someone known for comedies that often had a touch of drama (Mister Roberts and The Apartment come to mind), Lemmon had an everyman relationship with the audience. He was one of those rare actors who was immediately likeable on screen and for whom the audience has immediate empathy. It pays off here, because Joe is someone we end up wanting to root for. When he fails and falls, we condemn him less and feel for him more.

Both Lemmon and Remick earned Oscar nominations, and I’m of the opinion that these were both earned. While Lemmon battles his way through the film, Remick’s Kirsten is simply tragic, unable to come to terms with her drinking. By the end of the film, Kirsten is still a good time drunk, truly happy only when she’s drinking, but made so lonely by it that she is willing to accept the company of almost anyone just to feel like she’s still someone desirable.

I’ve watched a number of films recently that, good or bad, I don’t think I’d want to watch again. Days of Wine and Roses is one that I would watch again, although it might be a little time before I do so. The performances are strong across the board, but it’s the story that is really the most compelling sell here. The story comes across not as a melodrama, which it could have easily become. This feels real. These are people who don’t merely like alcohol but who become entirely dependent on it to not just function but to feel like themselves. They truly have no power over it, and it becomes something that consumes their lives.

Why to watch Days of Wine and Roses: Addiction is hell.
Why not to watch: The ending may be seen as unsatisfying.