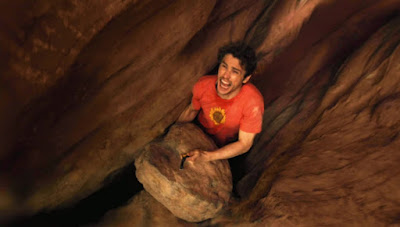 Writing about 127 Hours is going to be difficult for me for a couple of reasons. The first is that I have a real problem with films that involve physical confinement, and since our main character gets trapped 17 minutes in to a film that is just over 90 minutes long, there’s going to be a long part of this film that will make me uncomfortable. The second is that, while it’s impossible not to be impressed by the will to live and the ingenuity displayed by Aron Ralston (played by James Franco), there’s a part of me that thinks 127 Hours is a great advertisement for why it’s a bad idea to tempt fate in this specific way.

I talked with old podcasting partner Nick Jobe about this movie this morning, telling him that I intended to watch it today. He said that the truth of 127 Hours is that you go into the movie knowing what is going to happen and you spend the entire movie waiting for it to happen. When it does, it lasts a couple of minutes and then it’s over. That’s pretty accurate.

So, you probably know the story here. Aron Ralston is an extreme sports kind of guy. One fine weekend, he goes extreme sportsing in the middle of nowhere in Utah. He meets a couple of hikers named Kristi (Kate Mara) and Megan (Amber Tamblyn) who are a little lost. Aron acts as a guide and shows them some cool spots in the Utah Canyonlands National Park and they invite him to a party the next day. Aron then runs off and, while he’s crossing a particular tough spot of rock, he slips, slides down into a narrow crevasse, and brings a rock down with him that pins his arm against the canyon wall. He’s trapped.

The bulk of the rest of the film is Aron trapped in the slot canyon. He does everything he can think of to attempt to free himself, including rigging up a makeshift pulley to attempt to move the rock. And, eventually—as you almost certainly are aware—he is forced to break his arm and amputate it below the elbow to free himself. Throughout, we not only deal with Ralston trying to free his arm, but with his thoughts, memories, and hallucinations, including a vivid dream sequence involving a storm and a flash flood.

I’m actually surprised at how compelling the film is. Much of this comes from the directing choices of Danny Boyle, who commented that he saw this as an action film where the main character was unable to move. That’s a pretty good description. There’s a lot of split-screen work that is surprisingly effective. For a movie that spends a good hour trapped in the same spot, there are a number of scenes that come across as action sequences that really work. Of course, much of what makes the film work is the performance of James Franco, who manages to be compelling the entire time. Who knew that Franco had this in him?

It also helps that this appears to be a completely accurate depiction of what really happened to Aron Ralston, who has commented that the film is as close as possible to documentary without actually being a documentary.

The thing about 127 Hours is this: I don’t want to say that Aron Ralston got what he deserved, but there’s a part of me that does approach that thought. He went off into the middle of nowhere, told no one where he was going, and got trapped. I’m not denigrating the will it took to survive. I wouldn’t have lasted a day, and had that been me, I’d still be trapped there, skeletonized by whatever wildlife and insects live in that canyon. Ralston’s story is nothing sort of extraordinary. But seriously, tell people where you are going. Take a phone. This is something that the film addresses, as a matter of fact, so I don’t think I’m completely out of line in saying it. There’s an arrogance to Aron Ralston at the start of the film, and it may just be that a big part of the story is that Ralston figures this out. At least he seems to.

The scene, the one that you know is coming from the moment you decide that you’re going to watch 127 Hours is a tough watch. Is it the hardest amputation scene I’ve watched? Well, it ranks, although the scene from Splinter is pretty brutal as well. This one might be worse because it’s far more graphic and also far longer. Danny Boyle has never shied away from showing this sort of thing in the past, and he doesn’t shy away here. It’s not a scene I’d like to watch again anytime soon.

This is a hell of an experience. It also seems like a really good argument for having watching movies and blogging about them as a hobby instead of running around canyons and rock climbing.

Why to watch 127 Hours: It’s compelling despite the inherent limitations.
Why not to watch: I couldn’t help but think that this is a good argument against this sort of thrill seeking.