Film: A Ship Comes In
Format: Internet video on The Nook. 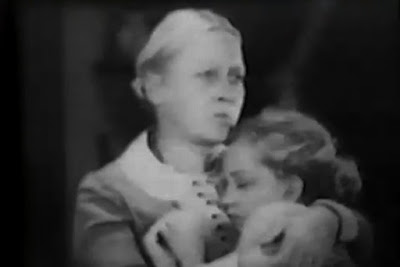 I hate bringing up Letterboxd all of the time here, but it often serves as an important touchstone for some of the more obscure films that I watch. In the case of A Ship Comes In, we’re looking at one with a dozen and a half scores, none of them higher than 3.5 stars and the vast majority below 3. Fortunately, the surviving print of the film is a mere 70 minutes long, so if there’s going to be pain, at least it will be short. A Ship Comes In suffers from a lot of problems. Most of these are a function of the time it was made. It’s overly melodramatic like most silent dramas and the plot points are incredibly obvious. Just as seriously, this is a film in desperate need of being restored. The print that exists, at least on YouTube, is faded and washed out and most of the title cards are a strain to read.

A Ship Comes In is an immigrant story. The Pleznik family—father Peter (Rudolph Schildkraut), his unnamed wife (a nominated Louise Dresser), son Eric (Milton Holmes), and young daughter Marthe (Linda Landi) arrive from…somewhere…via boat into New York. They clear immigration and settle in the city. Peter finds a job as a janitor and takes pride in his work as much as he can. Peter also has philosophical disagreements with Sokol (Fritz Feld), another immigrant who is also an anarchist or possibly a communist. At the very least, he’s a violent dissident.

Peter’s job is cleaning up a government office and one day early on the job he sees a ceremony of people being sworn in as new citizens of the U.S. He asks the judge (Robert Edeson) to make him a citizen as well, but the judge tells him that it takes five years for someone to gain citizenship. Peter toils toward this goal, and soon enough, the five years are up.

Because this is a movie, three things happen essentially at the same time. Thing one is that Sokol is arrested for being a dissident and a troublemaker and sentenced to 10 years hard labor. Thing two is that the five years have come to an end and Peter is about to be made a citizen. Evidently, his wife doesn’t care about becoming a citizen. Third, Eric turns 18, and with war in Europe and the United States about to become involved, he enlists in the army on his birthday. Now, all of this would be well and good, but it wouldn’t make for much of a movie. So the monkey in the wrench here is Peter becomes a citizen and his wife shows up with a cake she has baked for the judge. Sokol slips a bomb into the box, which explodes, seriously wounding the judge and killing his secretary. Peter is arrested for a crime he didn’t commit and is eventually sentenced for it—and he is arrested on the very day that Eric ships out for the army. I’d say “cue the strings,” except that the soundtrack we’ve got for this is an organ.

One major thing that A Ship Comes In has going for it is that as a silent, it was obviously made before the Hays Code did so much to codify the way movies could work and could end. That means there actually is some tension going into the final act—while we might predict a particular ending, we don’t really know for sure what’s going to happen, and that lends a certain tension to the final 20 minutes or so. The same is true regarding the fate of Eric. Will he return a hero? Die a hero? Anything is legitimately possible here.

A Ship Comes In isn’t a bad film for what it is, but it certainly is a difficult sell at best for a modern audience. It’s far too simplistic for one thing, but it’s important to remember that this isn’t specifically the fault of the film. It’s much more a function of the time in which the fiml was made. Yes, there were complex and difficult films made in the ‘20s, but the majority of them were made for an audience that was still learning the language of the medium, and in this case, things are kept ridiculously simple to work for that audience.

The relevant performance here is that of Louise Dresser, who was nominated. It’s Rudolph Schildkraut who handles the bulk of the drama and turns in the main performance, although I won’t deny that Dresser has a few key emotional scenes. Eric’s leaving for the war, for instance, and her husband’s sentencing are silent-movie-melodramatic, but very good for the time in which the film was made.

A Ship Comes In is a hard one to recommend, though. Those who are fans of silent films will no doubt find much more here than I did. I appreciate plenty of silents, but I’m hardly an expert and I find silent dramas difficult. A Ship Comes In is no less difficult despite being a fine example of a film of its type. It’s also interesting that Dresser—50 at the time this was made—would be nominated by a Hollywood that seemed (as it still is) obsessed with youth and beauty.

Why to watch A Ship Comes In: The story of immigrants is still the classic American story.
Why not to watch: It suffers from the same problems that almost all silent dramas do.