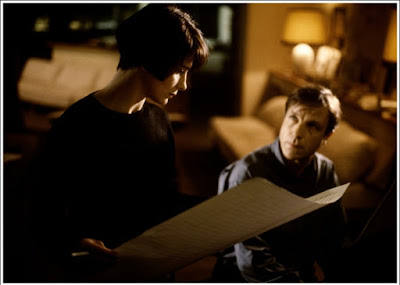 There are some good screenplays on the list for 1993, but there’s a lot missing that really should be here. Short animated films like The Nightmare Before Christmas probably won’t get much play, but if Babe could get a screenplay nomination a couple of years later, I don’t see why this should have been ignored. Tombstone is probably too silly, but it’s loads of fun, and True Romance might have been too aggressive for 1993 for nominations. I enjoyed The Wedding Banquet pretty well, and it’s the sort of film that Oscar likes. All of these are fine suggestions, but there are two that absolutely should have been here: the brilliant Groundhog Day and the stunning Three Colors: Blue, which were both inexplicably ignored. 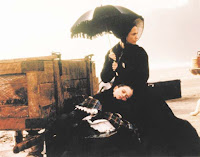 5: The Piano won this award and I think I understand why it did. The problem for me is that it fails for me in what it’s supposed to do. This is supposed to be a romance, and I don’t buy it as a romance for a second. It’s a romance of convenience, which makes it less compelling. Additionally, while this is certainly a feminist film, there are some aspects of it that seem to work against that basic feminist message. Ultimately, I think that The Piano is an interesting film, but it works at cross purposes. I’m not sure it should have even been nominated, let alone been handed an Oscar. It’s a standard romance in a lot of ways with nose tattoos and nudity added for interest.

4. The best part of In the Line of Fire is the surprisingly good chemistry between Clint Eastwood and Renee Russo and a fun villainous performance from John Malkovich. The screenplay is perhaps interesting because it’s intrigue that occurs at the highest level, since this is about an assassination attempt on the U.S. president. Beyond that, though, it feels like retread. It felt like there was potential here that never got developed, and that seems like a problem for a film nominated for Best Original Screenplay.

3. A good romantic comedy, or even a good romantic film is always a little bit of a surprise to me, since they seem to follow a set pattern more than any other genre. Sleepless in Seattle is good, and the screenplay is the best part of it. This is a movie that is smart enough to be smart rather than simply trying to be clever. It’s a subtle distinction, but it’s the sort of distinction that Nora Ephron was capable of making, much to the joy of the audience. I like this nomination, but not enough to give it the win. Frankly, I’d rather watch When Harry Met Sally.

2. Philadelphia is a film of its era in the sense that it was daring in 1993 but would seem almost pedestrian today. It’s the sort of story that needed to be told, and for when it was made, it’s a gutsy screenplay. One of the things it does very well is present Andrew Beckett as much less than the saintly character he would be in many theme-heavy “issues” films. It adds an interesting nuance to the film and makes it much more realistic. The screenplay is damn good, but the best things here are Tom Hanks and Denzel Washington, with Antonio Banderas ranking pretty high as well.

1: I really enjoy Dave. It’s an admittedly silly movie in a lot of respects, and it’s not the sort of movie that will change someone’s life, but it’s really entertaining. It’s also a really fun script, and I think it’s clear that the cast is having a great time doing it, especially Kevin Klein, Sigourney Weaver, and Ving Rhames in one of my favorite of his roles. I don’t know if it’s possible to watch Dave and not at least smile at it. While it really didn’t have a chance in hell over more serious movies, but of the five that are listed, it’s the one I’m the most likely to rewatch. But there are better choices that weren’t nominated.

Take your pick on this one, folks. The two best original screenplays of 1993 were from films not nominated for this award. For me, it’s a coin flip between the stunning and beautiful Three Colors: Blue and the incredibly witty and endlessly clever Groundhog Day. It depends mostly on my mood, but either of these would have been a better choice than any of the five we were given. 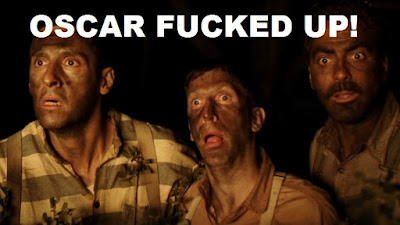 Email ThisBlogThis!Share to TwitterShare to FacebookShare to Pinterest
Labels: 1993, Best Original Screenplay, Dave, In the Line of Fire, Oscar Fucked Up, Philadelphia, Sleepless in Seattle, The Piano