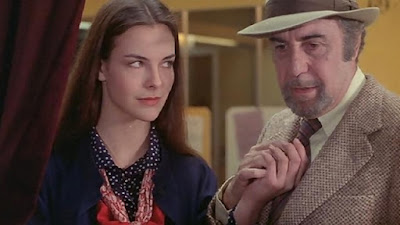 The filmography of Luis Bunuel has been a mixed bag for me. There have been some of his movies that I have really enjoyed, like The Exterminating Angel and The Discreet Charm of the Bourgeoisie. There have been others, like Las Hurdes that I have absolutely hated. I’m always a little apprehensive going into a Bunuel film because I’m not sure what I’m going to get. That Obscure Object of Desire (or Cet Obscure Objet du Desir if you prefer) is Bunuel’s last film. I went into it not knowing what to expect.

The biggest issue I have with Bunuel is the problem I have with absurdism in general. I don’t know if I should take it seriously or if I should laugh at it, and if I do laugh at it, there’s a part of me that suspects that’s what Bunuel wants. I don’t know how to react to absurdism and surrealism in general. Fortunately, That Obscure Object of Desire is a film that actually has a plot. While there’s certainly some absurdism here (don’t worry—we’ll get to that), there’s also a story that can be followed, and that helps tremendously.

Really, it’s a pretty simple story. A man named Mathieu (Fernando Rey) boards a train, A woman tries to board after him, and he dumps a bucket of water on her head. The train pulls out, the woman boards the train anyway, and the man takes a seat in a compartment where, coincidentally, everyone seems to be connected to each other in some way. Mathieu is asked why he dumped the water on the woman. Not wanting to seem like the sort of person who does such things at random, Mathieu proceeds to tell his traveling companions about his relationship with the woman, Conchita (played alternately by Carole Bouquet and Angela Molina).

That story is perhaps the most dedicated example of cockteasing ever encountered. When Mathieu first encounters Conchita, he is absolutely taken with her despite their huge age difference. He proceeds to give everything he can to Conchita to make her life comfortable. That includes money both to hear and her mother Encarnacion (Maria Asquerino). He even invites them to move in with him so that he can keep Conchita as a mistress. Eventually, Conchita relents, but every time they are about to have sex, she backs out. In one case, she wears a tightly-laced canvas corset that prevents Mathieu from untying it.

This really is the plot. Conchita makes promises and Mathieu acts on them, then Conchita backs out of her promises. For her, her virginity is the only thing she has, and giving that up to Mathieu would leave her with nothing, and so she doesn’t. And really, that’s the whole movie. Almost all of it is Mathieu explaining this relationship to the people on the train with him until Conchita shows back up at the tail end of the film and dumps a bucket of water on him.

Another thing that happens throughout the movie is a series of terrorist attacks that seem completely random. Every now and then, something blows up and one or another radical group takes credit for the bombing. Yes, this does actually play into the plot eventually.

I’m not sure I’d rank this is as one of Bunuel’s truly great films, but I did enjoy it pretty well, and based on the other Bunuel films I’ve liked, I guess I would rank it pretty high. Despite really having only a single plot point—Mathieu’s blue balls—the film keeps this fresh in the number and variety of ways that Conchita is able to push him off and not give in to his demands. Frequently, Mathieu gets so frustrated with her that he leaves her, but always comes back to her, and even buys her a house, giving her the opportunity to really turn the screws on him. It’s surprisingly fun in that respect.

But again, it’s hard to know exactly how much of this Bunuel wants us to take seriously and how much of this is just there to be weird, like the buckets of water that evidently just appear at random spots on the train. That’s classic Bunuel. But is it a statement or just funny? I don’t know and I have no way to find out.

I think I’m done with Bunuel on all of the various lists I have and have had. I think I’m okay with that. His work is such a mixed bag, that I kind of run out of patience with him. It’s great when one of his films is worth seeing, but I never know what I’m going to get.

Why to watch That Obscure Object of Desire: It’s Bunuel with an actual plot.
Why not to watch: It doesn’t really go anywhere.