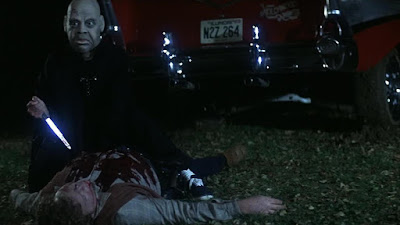 I knew when I signed on to watch the Fangoria list of 101 Best Horror Movies You’ve Never Seen that it was going to be a mixed bag. I figured there’d be a few duds and a few movies that turned out to be really worth watching for one reason or another. I’ve said before that I really try to go into every movie with an open mind, which is how I approached Strange Behavior (originally titled Dead Kids). Well, a few minutes in I was pretty sure that this was going to be one of the duds. Half an hour in, I was desperate for the damn thing to end. Strange Behavior is based on an interesting idea and has some noteworthy actors in it, but is cursed with terrible production values and worse editing.

The basic story is this: in Galesburg, Illinois (a couple of hours drive from where I live, actually), a series of slasher murders take place. These murders seem to be the work of several different killers. At the same time, a psychologist named Gwen Parkinson (Fiona Lewis) is conducting a series of experiments. Think the two are related? You’ve seen a movie before.

Okay, there’s a little more to it, but not much. What we have is terrible production values and the wasted talents of Michael Murphy, who plays the town police chief and former Best Actress winner Louise Fletcher, who plays his girlfriend. Of course, to make things interesting, the police chief’s son Pete (Dan Shor) takes part in the experiments, too, because he needs money. He needs the money because he wants to apply to the local college (the one where the experiments are happening) and his dad wants him to go elsewhere. Also, since the police chief blames the psychology department of the local school for the death of his wife—specifically he blames a man named Le Sange (Arthur Dignam)—he immediately accuses the psychology department of being involved in the murders. He’s right, but it’s still kind of a stupid leap. And because of this, and because Gwen Parkinson is basically making murderers with her experiments, we’re going to have a situation where young Pete is primed to kill his father for meddling.

Okay, I said that this is mired in terrible production values, and I’m not kidding. Except for the gore moments, I’m a little surprised that this didn’t turn up on Mystery Science Theater 3000, since it’s on a par with plenty of the movies shown on that show. The script seems like it was penned by Crow T. Robot at about the same time he wrote Earth Vs. Soup.

Strange Behavior also suffers from being edited by someone who evidently failed to deal with his premature ejaculation problem. There are multiple times that a scene cuts literally in the middle of someone talking, literally in the middle of a sentence. The sets are cheap and fake looking, evidently scouted by a location scout who was limited to a six-block radius in a small town in New Zealand (not a joke—that’s where this was filmed). At one point, Pete and his girlfriend/receptionist at the psych experiment ward Caroline (Dey Young) go to a “restaurant” called Steak ‘n Shake. It looks like a house with a neon sign superimposed on it, and looks like it has seating for 12 people. I’ve been to Steak ‘N Shakes before. They don’t look like somebody’s house.

I don’t have a way to process Strange Behavior. It looks like it was made by amateurs with non-professional equipment, and yet it has known actors with solid careers and also has a soundtrack by Tangerine Dream, the ‘80s movie soundtrack equivalent of Danny Elfman. The other thing I don’t understand is how much people appear to like it. While it doesn’t have stellar reviews, it has a surprisingly high rating on IMDB and far more reviews at 3-stars and above than below it on Letterboxd. What the hell are other people seeing in this low-budget loser that I’m not?

I said at the top that I knew there would be some low points on the Fangoria list. I’ve seen worse movies, of course, but few that are this flatly disappointing on virtually all levels. It even has a couple of good moments. But the talents of virtually everyone are wasted here. How wasted are they? Just about as wasted as my 95 minutes watching this pile.

Why to watch Strange Behavior: You’re a slasher completist.
Why not to watch: It is intensely stupid.