Film: The Diary of Anne Frank
Format: DVD from NetFlix on rockin’ flatscreen. 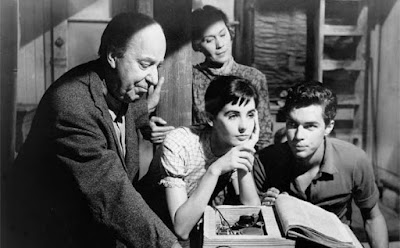 I knew this was going to be rough. The Diary of Anne Frank is a three-hour movie, and I know where we’re getting to at the end. Essentially, this is an exercise in watching a story play out where you’re just waiting for the shoe to drop. You know it’s going to happen, and it’s probably not going to happen until the end, which means all of the close calls and nervous moments are filled with an odd tension, even the ones that are in the middle of the movie and therefore too early in the narrative to be that dangerous.

You probably already know the story, and if you don’t, shame on you. Briefly, during the Nazi occupation of the Netherlands, the Frank family moves into the attic apartment over a business in Amsterdam. They stay there for two years with the Van Daan family and are eventually joined by a dentist named Albert Dussell (Ed Wynn). The eight people, all essentially fugitives from the German invaders because they are Jewish, are forced to be silent during the day so that they don’t tip off the people working below to their presence. Their only contact with the outside world is a radio and through the meetings with the factory head Kraler (Douglas Spencer) and his assistant Miep Gies (Dodie Heath).

There is, as would be expected, a great deal of squabbling. Anne (Millie Perkins) is a precocious 13-year-old at the start of this ordeal, and her main character traits are that she is talkative and more than willing to contend with authority. She is devoted to her father Otto (Joseph Schildkraut) and clashes frequently with her mother Edith (Gusti Huber). Her older sister Margot (Diane Baker) is passive and actually doesn’t figure into the narrative much.

There’s also a lot of fighting between Hans (Lou Jacobi) and Petronella Van Daan (Shelly Winters). Petronella is obsessed with the life she lived and initially refused to leave Amsterdam because she couldn’t be away from her various comforts. In fact, the one thing that she brings with her into attic confinement is her fur coat. Their son Peter (Richard Beymer) is 16 at the start of the film, and while Margo would seem to be his natural match, he eventually finds himself more attracted to Anne. Peter also has a cat that plays into a number of critical plot points.

Because the story is a foregone conclusion here, the only way to maintain interest is in the interactions between the different characters. Fortunately for the film, we have some very good performances here. Both Shelley Winters and Ed Wynn were nominated for supporting roles here, and Winters won. It’s worth noting that I think Joseph Schildkraut was probably overlooked for his role. He’s immediately sympathetic and is in many ways the moral center of the entire film. The same could easily be said of Lou Jacobi, who is compelling in every frame he is in.

I was initially curious as to the lack of a nomination for Millie Perkins. After all, The Diary of Anne Frank was nominated for eight Oscars and won three. This seems like a natural role for a nomination, especially in a film with this much acclaim. After watching the film, I get why she wasn’t nominated. It’s not a bad performance; far from it. It is mildly annoying, though. Perkins was 21 playing 13-15, and a part of that performance seems to have been adapting her voice to attempt to sound like a young teen. There are moments when this is terribly annoying and grating. It’s not a constant, but it is a constant worry for the entire running time.

I also understand the long running time here, but this is a film that is honestly too long. Because the ending is going to be known by pretty much anyone who watches the film, the entire audience knows what is going to happen at the end. It’s a long build for a foregone conclusion, and that’s incredibly frustrating. It doesn’t always change the fact that there are a number of tense moments that we know intellectually will come to nothing, but it does make me wonder precisely why this needed to be three hours long (at least it’s that long with the initial overture).

Because the film is so long, it falls into a pattern that ends up repeating itself. There is conflict in the apartment between people who are naturally going stir crazy and are lashing out. Then there is the threat that someone will find their hiding place. Repeat, punctuated with visits by Kraler and Miep and the occasional voiceover musing that I would guess comes directly from Anne Frank’s actual diary.

In essence, The Diary of Anne Frank is one of those films that is immediately labelled as “important” because of the subject matter. It’s almost good in spite of itself. The direction of George Stevens plays into this, maintaining a real sense of tension despite the ending we know is coming. It is too long, though, and while I think there is a lot here that is worth seeing, it’s not a film I think I’ll watch again.

Why to watch The Diary of Anne Frank: The history is important.
Why not to watch: If you know the story, you know where it’s going for three hours.