Schizophrenia Means Never Having to Say You're Sorry

Film: I Never Promised You a Rose Garden
Format: Internet video on The Nook. 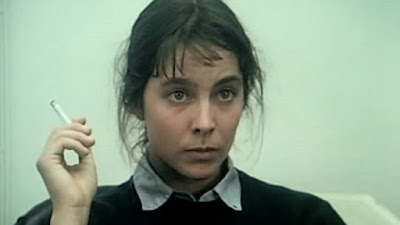 Yesterday I watched a movie about alcoholism. Today, it’s all about schizophrenia. I’ve watched plenty of movies about mental illness before. Shock Corridor, The Snake Pit, Heavenly Creatures, and One Flew Over the Cuckoo’s Nest spring to mind as films with this as a central idea, and plenty of others certainly touch on it, and that’s really just the mainstream movies. Watch enough horror movies and you’ll see plenty of movies taking place inside institutions as well. I Never Promised You a Rose Garden is the sort of film that seems to want to capitalize on the success of Cuckoo’s Nest. The difference is that this time, our main patient is suicidal, teetering on the edge of a face-first dive into schizophrenia, and is a 16-year-old girl named Deborah Blake (Kathleen Quinlan).

The film starts with Debbie’s being committed to what looks to be very much the standard movie version of an institution. We also get an early glimpse into the fantasy world Yr where Debbie spends a great deal of her waking life. Life in the institution is difficult. It’s loud and raucous and none of the patients are firmly attached to anything like reality. Debbie discovers that she is more or less unable to feel anything in the real world because all of her emotions are tied up in the savage world of Yr. Another suicide attempt and scenes of her burning her arm with a cigarette highlight the fact that Debbie is physically, mentally, and emotionally detached from the world the rest of us live in.

While much of the film is made up of the existence inside the institution, we get some of Debbie’s therapy sessions with Dr. Fried (Bibi Andersson). Dr. Fried works to peel away the multiple layers of Debbie’s delusions, false memories, and real experiences to get to the heart of what is really going on inside her head. Meanwhile, on the ward, Debbie is constantly assaulted by several of the other inmates and one of the guards, with her roommate Carla (Darlene Craviotto) and one of the orderlies (Norman Alden) doing their best to keep her on a more level playing field. She also befriends Miss Coral (Sylvia Sidney), another patient who was once released from the hospital but has returned.

Bluntly, I Never Promised You a Rose Garden is a difficult watch. While it tries to paint a real picture of schizophrenia with those moments moving between the real world and Yr and with the constant voices in Debbie’s head playing as a sort of voiceover, it’s hard not to see this as primarily an exploitation film more along the lines of Shock Corridor. I may simply be biased in this respect, since the film was produced in large part by exploitation master Roger Corman. There’s a sense that this is Corman trying to do something a lot more respectable (respectable enough to earn an Oscar nomination, after all) but with him not being able to fully divorce himself from his low-budget roots. The suicide scene and the cigarette burning scenes are indicative of this sort of play to the lowest audience common denominator, and these scenes are difficult to watch. Most of that is because of Debbie’s complete non-reaction to the pain.

Kathleen Quinlan was 23 playing 16-18 here, and while at the start of the film she looks a little (just a little) too old to be a teen, by the time we get to the end, she’s able to pull the age off pretty well. It’s worth saying also that I’ve already done the 1977 Best Actress race on a Friday past. If I hadn’t, you can bet that Quinlan would be mentioned as someone who was snubbed for an Oscar nomination. She did in fact receive a Golden Globe nomination for this role, and I’d say it was more than deserved. In fact, with a nomination for this role, I’d be willing to argue for her to finish first or second in the actual field.

In a lot of ways, though, it seems like Quinlan is this good in spite of the film that surrounds her. She is compelling, but the rest of the film feels like it’s there to get a rise out of the audience and to serve as a chance to watch crazy people do crazy things. It also feels like it’s very much trying to piggyback on the success of One Flew Over the Cuckoo’s Nest. There’s a lot here that feels unsavory, and it feels like it was done specifically to be unsavory.

That said, I found I Never Promised You a Rose Garden to be a lot more harrowing than I expected. It’s a hard film to recommend. It’s worth seeing for Quinlan, who is genuinely great in a difficult role. Beyond this, I’m not sure it’s one I’d want to sit through a second time.

Why to watch I Never Promised You a Rose Garden: A real attempt to show schizophrenia.
Why not to watch: It’s a lot more grueling than you might expect.