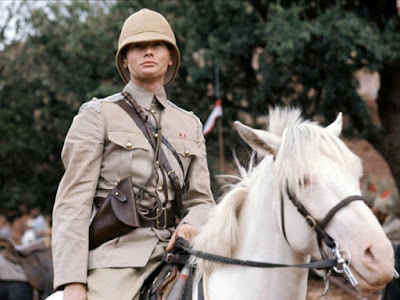 I literally have a stack of unwatched movies sitting next to me, but instead of watching one of those, including a few that I’ve really been looking forward to seeing and at least one that has been sitting in its NetFlix envelope for more than a week, I’ve instead decided to watch Young Winston on TCM’s app because I missed recording it on the DVR and it vanishes in 24 hours. I make sacrifices for this blog sometimes. As the name of the film might suggest, Young Winston is about the early life of Winston Churchill, based on his own memoirs.

With a film like one, I think a certain grain of salt. I don’t doubt that Young Winston is an accurate depiction of Churchill’s book. I question instead just how accurate Churchill’s memoirs are. There is almost certainly a bit of rose-colored glasses with this, and almost certainly a bit of hyperbole in places. I don’t know, of course, but I do suspect. I get this mostly from the voiceover that hangs over many scenes. The words paint a picture of character and dignity, while the reality we see is quite a bit more dismal.

Young Winston is a film of two halves. The first half, aside from an opening bit of Churchill (Simon Ward) participating in a military action in India, is about his childhood. When I said a moment ago that Churchill’s reality is far more dismal than the voiceover, it’s particularly in this section that I mean it. We learn from the voiceover that he greatly admired his parents. What we also learn is that he had only a couple of really meaningful conversations with his father (Robert Shaw), who was embroiled in politics and died young (evidently from syphilis). His mother (Anne Bancroft) seemed to be preoccupied with other things for most of his young life, leaving him to be raised by his beloved nanny (Pat Heywood). In many of these early scenes, Churchill is played by Russell Lewis as a young boy and Michael Audreson as a teen. What we get from both is that Churchill was sent to boarding schools where he was regularly beaten and otherwise treated like shit. His parents failed to visit him, and possibly failed to even return his letters.

Anyway, eventually Churchill joins the army (he required three tries on the entrance examination) and qualifies only for the cavalry instead of the evidently more prestigious infantry, yet another disappointment to his father, who, even when ailing, refused to allow his son to assist in his political career. After the father dies, Churchill goes off to war, serving in India and the Sudan as a correspondent, replacing the lost family fortune (squandered in the stock market) by writing books about his experiences. The second half of the film starts here and focuses a great deal on Churchill’s experience in the Second Boer War, his capture during the war, and (and this is genuinely the best part of the film), his daring escape from a POW camp.

The film ends with the first few baby steps of Churchill’s political career in the House of Commons, and his taking of a stand against wanton military spending, a stance his father once held and because of which he resigned a cabinet post.

The most interesting thing about the film is the cast. In addition to people like Anne Bancroft and Robert Shaw, Young Winston finds small roles for such luminaries and soon-to-be luminaries as Anthony Hopkins, Edward Woodward, Ian Holm, and Jane Seymour. It’s fun playing spot-the-celebrity, even if most of these roles are pitifully small. Anthony Hopkins, for instance, doesn’t show up as Lloyd George until the tail end of the film, and Ian Holm is gone from the film after the first 45 minutes or so.

Where the film falls apart for me is the characterization of Churchill. Simon Ward does a fair enough job in general, but whenever he is forced to speak politically as Churchill, he adopts a young man’s version of Churchill’s distinctive jowly style. Worse, Ward also does the voiceover work. This is naturally intended to sound as much like Churchill as possible, or at least how people think of Churchill sounding. It comes across as a very poor, almost comic impression of the man, and it doesn’t do any credit to the film, to Churchill, or to Simon Ward.

The biggest problem is that it’s just not very interesting. It’s not until we get to the attack on the armored train in the Boer War that things are really interesting, and once that happens and Churchill escapes from prison and then the country, the film goes back to being fairly plodding. It’s a long way to go for an exciting half hour or so.

In the final analysis, I won’t ever suggest that Churchill wasn’t an important historical figure or that his achievements weren’t similarly impressive. He deserved a better film, though, because this one doesn’t come close to doing him justice.

Why to watch Young Winston: The escape is cool.
Why not to watch: It's really bloated.