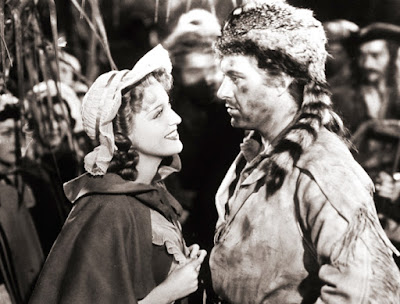 When you talk about classic screen couples, a few names come up. Fred and Ginger, naturally, but also Tracy and Hepburn, William Powell and Myrna Loy, and Bogie and Bacall. I think it’s fair to mention Nelson Eddy and Jeanette MacDonald in that crowd. They made eight films together, and their films were incredibly popular. The first of these, Naughty Marietta (sometimes called Victor Herbert’s Naughty Marietta) is the only one nominated for an Oscar, at least in the categories I care about.

I have to admit, I was worried. I’ve seen a few Jeanette MacDonald films and have either liked them or at least been neutral on them. MacDonald was an engaging presence on screen and she had great timing for light romantic comedy. The problem is the singing. I’ve learned to appreciate musicals a lot more in the last six years, but opera just doesn’t work for me, and she was definitely an operatic singer. The singing, in fact, has been the hardest part of her films for me to deal with, even if I’ve liked everything else. Nelson Eddy is a new one on me; all I really knew about him is that my mother wasn’t a fan.

So let’s knock this out right away—for me, the music was the biggest issue I had with the film. I tried. I just don’t like the style. That said, the original stage play is the source of “Sweet Mystery of Life,” so it’s got that going for it. And it really is just the style. The songs aren’t bad, but Jeanette MacDonald sings in a terribly high voice that makes me go all fetal.

Anyway, this is the story of Princess Marie (MacDonald), who lives in Paris with her uncle (Douglass Dumbrille) during the reign of Louis XV. Marie has been promised in marriage to an elderly and rather unpleasant Spanish Duke named Don Carlos (Walter Kingsford). While she conspires to find a way out of the arrangement, she learns that one of her servants, Marietta (Helen Shipman) is heading to New Orleans on a boat. Marietta has always dreamed of marrying a young man in Marseilles, but they are both too poor. In New Orleans, she can be guaranteed a husband with an income among the colonists. So, naturally, Princess Marie gives Marietta enough money to stay in France and assumes her identity on the boat for N’awlins.

And this is where it gets fun. Just before the ship arrives, it is attacked by a group of pirates, who kidnap all of the women and take them to shore. Before anything terrible can happen to the women, a band of mercenaries hired to keep the Indian population down wanders by and hears the screams of the distressed ladies. The mercenaries, led by Captain Richard Warrington (Nelson Eddy), wade into battle and save the women and lead them unbesmirched to the city, to the thanks of the grateful governor (Frank Morgan), who is under the constant jealous eye of his wife (Elsa Lanchester).

You can certainly see where this is going, right? Warrington because quite enamored of “Marietta,” and she plays hard to get, since she’s not really there for a husband, but to get away from one. He pursues, she runs, and eventually relents because he’s big, handsome, and has a good singing voice (if you like that kind of thing). Meanwhile, Princess Marie’s disappearance is obviously noted and her uncle sets sail for the colonies to bring her back and force that marriage on her. Since this is a musical from 1935, though, there’s not much in doubt with how it will all turn out.

When I said that the style of the singing is the main downside, I mean it’s really the only downside. There’s a lot going on here that’s really entertaining. Eddy and MacDonald make a really good on-screen couple, so it’s no wonder that they did eight movies together and were as popular as they were. Eddy seems to have the same sort of light comedy timing that MacDonald does, and they play off each other well.

Not only that, but they look the part. Jeanette MacDonald was truly beautiful, so casting her as a princess makes sense. Based on my mother’s opinion of him, I expected Nelson Eddy to be either weasely or a big mush, but he’s neither. He actually looks good in a uniform of the era. From what I understand, this was a star-making vehicle for Eddy, and I can see why. He looks the part of a classic Hollywood leading man.

I’m pleasantly surprised. I could live without the singing, or could live with it in a different style. True, the story doesn’t go anywhere new. If you’ve seen a musical…ever…you know where this is going to end up. But it’s genuinely funny in places. Having Frank Morgan and Elsa Lanchester is such a treat, since both were wonderful comic actors, and they play of each other beautifully. Naughty Marietta isn’t going to set the world on fire or make you change your mind about musicals one way or the other, but it’s a pleasant enough way to spend a couple of hours.

Why to watch Naughty Marietta: It’s surprisingly funny.
Why not to watch: All of the singing is brutally operatic.