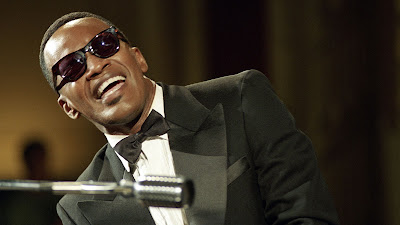 A couple of years ago, a Half-Price Books near where I work had a massive sale. If you wanted to take part in the sale, you bought a bag for $35 and anything you could fit in the bag was yours. I walked out with more than 50 DVDs. One of those was the two-disc set of Ray, since I knew it was a movie I’d watch eventually. I was mostly daunted by the length, since Ray is a little more than 150 minutes long. I like Ray Charles as much or more than the next person, but that’s a pretty serious commitment.

Ray is a straightforward biopic of Raymond Charles Robinson, better known to the world as Ray Charles. While there are a few moments of something like magical realism, Ray appears to be a true biography of the man without removing the warts. Ray Charles (played in the film by Jamie Foxx) was a unique musical presence, a man who revolutionized a great deal of music and a true innovator. He was also a man who had a number of children outside of his marriages and who was a heroin addict for a very long time. All of this is included in the movie, and that inclusion is important.

Ray doesn’t cover Charles’s entire life—essentially it deals with his early years (where the young Ray is played by C.J. Sanders) and his early tragedies and then with his early music career through to his rise to popularity and his issue with heroin and getting clean. In truth, these are the most interesting parts of his story anyway, so it makes sense that the film glosses over the last 40 or so years of his life and career.

The early tragedies of Ray Charles include the death of his younger brother George (Terrone Bell) and the loss of his eyesight at a very young age due to glaucoma. Charles grew up dirt poor, raised by his mother (Sharon Warren) and was eventually sent off to a school for the blind when his mother could no longer effectively teach him. Of course, the bulk of the film is concerned with his music, starting in clubs in Seattle and eventually getting signed to a record label and becoming famous. Charles was initially an R&B artist, but eventually made a real name for himself by combining elements of gospel music and blues and performing blues-y versions of country songs.

There’s a great deal here on his personal life as well. His first marriage is skipped entirely, and instead the film focuses on his second, much longer marriage to Della Bea Robinson (Kerry Washington), his frequent infidelities with his back-up singers, and his heroin addiction, which starts early in his touring days as a non-headlining part of a small combo.

Ray excels in a number of important areas. First, it’s beautifully cast from top to bottom. Jamie Foxx received a great deal of deserved acclaim for his portrayal of Ray Charles (more on this in a moment), but he’s merely the largest part of an excellent cast in every role. In addition to the few I’ve mentioned above—with special mention for C.J. Sanders, who is excellent as the young Ray—the film has solid work from Clifton Powell and Harry Lennix as original and replacement road managers Jeff Brown and Joe Adams. Larenz Tate shows up as Quincy Jones in a couple of important scenes. Curtis Armstrong and Richard Schiff are excellent as Ahmet Ertegun and Jerry Wexler, the two men who engineer the early years of Ray’s career and David Krumholtz as Milt Shaw, his agent. True standouts in the cast are Aunjanue Ellis and Regina King as Charles’s back-up singers/mistresses Mary Ann Fisher and Margie Hendricks respectively. There’s not a person who feels out of place here.

But this is Jamie Foxx’s show and he makes a meal of it. It would be unfair to say that Foxx does an impression of Ray Charles in this film because it goes much deeper than that. He captures the essence of Charles from the first moment he is on screen. He looks like him, speaks like him, and most impressively, moves like him. It’s cheap PR to say something like “Jamie Foxx is Ray Charles,” but it’s hard not to think that watching him on camera. It’s a completely believable performance all the way through.

If there’s a problem here, it’s that Ray is longer than it needs to be. It never really drags, but it feels like there are 20 minutes that could be removed here. That said, I’m not entirely sure where to remove those minutes, because I wouldn’t want to lose a second of the music, which is still as good and as powerful now as when it was first recorded. Foxx did his own piano playing for the film, but it’s really Ray Charles’s voice in the vocals. I’m not sure anyone could adequately duplicate that.

I liked Ray quite a bit. It’s a good story and it’s beautifully presented. Taylor Hackford manages to keep the story compelling, and moves between the linear timeline of Ray Charles from the beginning of his career until he kicks heroin and the flashbacks to his childhood naturally and well. It’s a smart film, and it’s one I’m not just happy to have seen, but happy to have in my collection.

Why to watch Ray: I’m still not sure how Jamie Foxx had this in him.
Why not to watch: It’s a bit longer than it needs to be.