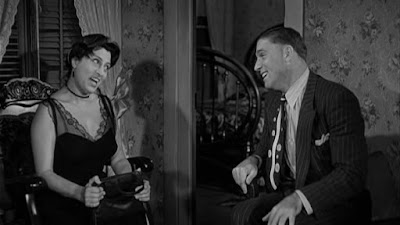 Most of The Rose Tattoo takes place inside the house of the main character, a good indication that this was based on a stage production, which it was. Tennessee Williams apparently wrote this with his friend Anna Magnani in mind, but she didn’t feel she had a good enough command of English to play the role on stage. Four years after the show debuted, Magnani did take the role in the Hollywood adaptation, one for which she won an Oscar. It’s a pretty straightforward play, based almost entirely around a single character.

I’ve seen plenty of Tennessee Williams adaptations--A Streetcar Named Desire, Summer and Smoke, Cat on a Hot Tin Roof--but this one was new to me. It’s also substantially different from some of Williams’s other plays, particularly when it comes to the ending. That’s not a good thing or a bad thing; it’s just a thing worth mentioning. Like many of his plays, though, The Rose Tattoo focuses on a woman in the south who is repressed in some significant way and damaged by the events of her past.

Estelle Hohengarten (Virginia Grey) arrives at the home of Serafina Della Rose (Anna Magnani) in an Italian neighborhood somewhere in Louisiana to have a shirt made. Serafina takes in sewing from women in the neighborhood as a way to supplement the family income made by her husband delivering produce. It’s clear to the audience that Estelle is having the shirt made for Serafina’s husband, with whom she is having an affair. Serafina, not knowing this is the case and convinced that her husband has always been faithful to her, takes the work. That night, her husband is killed by the police while he is smuggling unmentioned items under a load of bananas.

Flash forward three years. Serafina, still unaware of her husband’s infidelities, has almost never left her house, spending her time still sewing and avoiding all contact. She has attempted to force her daughter Rosa (Marisa Pavan) into the same kind of life, but young Rosa wants life outside of her house, and goes to a dance without her mother knowing. It is there that she meets and falls for Jack Hunter (Ben Cooper), the sailor brother of one of her friends. Almost immediately Rosa and Jack are an item. A few days later, Serafina essentially holds hostage the graduation dresses of all of Rosa’s classmates and refuses to let her daughter even dress to go to the ceremony. She is eventually convinced to let it go, and Rosa goes to her graduation.

On her way there, Serafina has a few critical incidents. First, a customer demands that she sew together a shirt, and, agitated, Serafina gets into an argument with the woman. Incensed, the woman tells Serafina about her husband’s affair years before. Serafina demands that the local priest tell her if her husband ever confessed the affair to him, and she is eventually dragged off by Alvaro Mangiacavallo (Burt Lancaster) and taken home. While Alvaro is kind of slow and loud and brash, Serafina finds herself attracted to him and tells him about her late husband. She asks him to return that night, and, on a whim, Alvaro goes to the local tattoo parlor and gets a rose tattooed on his chest—the same tattoo her late, cheating husband had. Meanwhile, Rosa makes plans to run off with Jack to escape her mother.

I said at the top that this is similar to a lot of Williams’s plays in that it focuses almost entirely on a woman who has been badly damaged by the past events of her life. Serafina is the entire focus of the play—everything that happens, including Rosa’s whirlwind romance with the surprisingly sweet and gentle Jack—happens in the context of how it affects Serafina. This is one of those interesting situations in which we are given a truly command performance inhabiting a character who is truly unlikable. Magnani is riveting on the screen, but Serafina is absolutely draining as a character to watch. She is almost entirely made up of her emotions, which means that all we see of her are those emotions. There isn’t a moment when she isn’t crying, laughing, screaming at someone, or imploring someone else. That said, I find Magnani fascinating on screen. She could, with a change of expression, go from vibrant and beautiful to worn and haggard in a moment, something required of her here.

The rest of this I can frankly take or leave. Marisa Pavan was nominated in a supporting role here, most of this I think for the last 10 minutes or so of the movie. She’s good, but I’m not convinced she’s notably good through the film. Burt Lancaster, on the other hand, is not the Burt Lancaster I’ve come to know and love over the last few years. He’s incredibly annoying, dumb, loutish, and aggravating. As much as I hate to say it, I couldn’t stand him. I’m certain that this is the character he’s playing and not the normally-dependable Lancaster screwing things up, but the less he was on screen, the happier I was.

The truth is that the longer this was on, the less I liked it. It’s fascinating at the start, enough that my wife sat down and ended up watching the whole thing with me because the opening grabbed her. By the time this got to the end, we were both exhausted, and not in a good way. It’s worth it to see Magnani, but I’m not convinced it’s worth it for any other reason regardless of its eight Oscar nominations and three wins.

Why to watch The Rose Tattoo: Anna Magnani.
Why not to watch: Sadly, Burt Lancaster gives an unhinged performance.

Posted by SJHoneywell at 7:34 PM