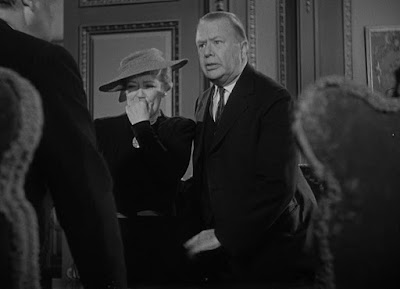 One of the surprise pleasures I’ve had on this blog over the past 18 months was discovering The More the Merrier, a sort of screwball comedy right in the heart of the war years. That movie featured the talents of Charles Coburn and Jean Arthur as well as those of Joel McCrea, and it’s an entertaining little romp that is probably exactly what people needed in the middle of the war. The Devil and Miss Jones comes from a couple of years earlier and is thus an earlier pairing of Coburn and Arthur, and minus Joel McCrea. McCrea is replaced by Robert Cummings, who is pleasant enough, but hardly of the same caliber.

Anyway, this is from 1941, so the winds of war were certainly starting to blow, but hadn’t yet reached American shores. Because of that, The Devil and Miss Jones is not about any sort of war effort, but about the plight of American workers and the problems encountered with the men who run such companies. In truth, it’s a lot closer to a 1940s version of “Undercover Boss” than anything else.

One fine day, the employees of Neeley’s Department Store, frustrated by the way they’ve been treated by the store’s owner, burn him in effigy outside the front. However, since the owner of that store, the richest man in the world, has spent his life in seclusion, no one really knows what he looks like. The man in question is John P. Merrick (Charles Coburn), who is rich to the point that he didn’t even remember that he owned the store in question. Incensed by desire for some employees to unionize, Merrick decides to do something about it. A detective claims that it will take him a couple of weeks to figure out the ringleaders. Distressed that it will take a couple of weeks, Merrick sends the detective off and decides to take his place on the sales floor to root out the employees who are causing trouble.

What he learns shouldn’t be too surprising. He figures out after a couple of days that the workers actually have legitimate complains. The biggest problem he discovers is that one of the ringleaders is Mary Jones (Jean Arthur), who is immediately kind to him and takes pity on him when he proves to be relatively clueless on the sales floor. He also meets Elizabeth Ellis (Spring Byington), a woman of roughly his own age who takes pity on him as well. Mary is dealing with the fact that her boyfriend Joe (Robert Cummings) has recently been fired from the store from trying to unionize the employees.

Of course, there’s plenty to deal with, including Hooper (Edmund Gwenn), who manages the shoe department and has taken an instant dislike to Merrick, who is working under the name of Tom Higgins. Worse, Hooper is also on the prowl for the charms of Elizabeth, meaning that these two are going to be at odds. Merrick, as Hooper, struggles as a salesman, even failing to make a guaranteed sale when his butler (S.Z. Sakall) brings in the child of another of his servants to purchase shoes. Slowly, Merrick realizes that the problem isn’t the workers who want to unionize, but the managers who treat the employees terribly and run the store unfairly.

Since this is at least similar to a screwball comedy, we know we’re heading for a happy ending. The film slows down a bit in the middle when “Tom,” Elizabeth, Mary, and Joe spend a day on Coney Island. At the start of the day, Merrick is convinced of Mary’s goodness but thinks that Joe is a rabble-rouser and wants to get him away from Mary. By the end of the day, he’s figured out that Joe is actually right about a number of things concerning the plight of the workers. There’s a scene in a police station that is intended to be a comedy set piece, and it doesn’t work as well as it wants to or as well as it should, which is a shame.

On the other hand, the last 20 minutes or so of the film are completely frenetic and make up for a lot of problems. Merrick, still as Tom, and now in the position of having everyone think he’s actually a detective, is called on the carpet by the men who think he’s his boss but who actually work for him. And then we get a meeting of the labor organizers with Merrick’s board of directors, who are confused as to why he’s sitting with the other side. Of course it’s all going to end happily. It’s what we expect going in. Like any decent screwball, it’s the journey that matters, not the end.

The issue is that The Devil and Miss Jones is only a decent screwball. There are certainly some good moments, but it’s also a bit dark in places, and it doesn’t contain some of the same joy that a film like this normally does. I enjoyed this, but for my money, The More the Merrier is a better film in every respect. Jean Arthur is better, Charles Coburn is worlds better, and Joel McCrea is a better romantic partner for Arthur. You could do worse than this one, but you could do a lot better, too.

Why to watch The Devil and Miss Jones: You can’t go wrong with Charles Coburn and Jean Arthur.
Why not to watch: Like many later screwballs, it’s not as clever as it wants to be.