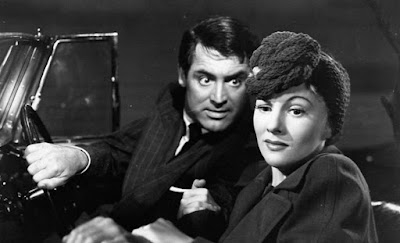 When I did the 1001 Movies list, I watched a lot of Hitchcock, since he is by far the best-represented director on the big list. Not all of Hitch’s movies made the list, though, and the only one that contains an Oscar-winning performance was left off. That film is Suspicion, a film that is in many ways classic Hitchcock and in others seems tonally strange. It’s a hard film to figure. Part of the tonal strangeness comes from moments where the mood doesn’t merely shift but 180s on a dime. The other odd bit here is that we spend the entire movie knowing that Cary Grant is playing a rogue and a “bad boy” and convinced that he might well be a serial murderer.

Johnnie Aysgarth (Cary Grant) is a charming and dashing man, desired by all the ladies both despite and because of his bad boy nature. He’s an inveterate gambler, always broke, and always in debt. He meets Lina McLaidlaw (Joan Fontaine) on a train and manages to charm her despite her being something close to a spinster. When he suddenly arrives in her town, she is smitten in spite of herself and even though her father (Cedric Hardwicke) disapproves, she soon runs off with him and elopes.

We soon discover that Johnnie, while charming (and looking like Cary Grant), is not nearly the catch that Lina might have thought he was. He has no job, no money, and has enormous gambling debts that he is desperate to pay. He has furnished their house expensively with IOUs and promises and soon discovers that Lina will get no real allowance from her father. She is unwilling to have him continue borrowing money and demands that he get a job, an idea to which he reluctantly agrees. Despite Lina’s father’s reservations on the marriage, he sends them a wedding present of two antique chairs, which Johnnie eventually sells to pay off gambling debts.

Soon enough, Lina finds that things are much worse than she had imagined. Johnnie has been fired from his job because of a missing amount of money. He plans to start a real estate company with his friend Beaky Thwaite (Nigel Bruce), but the two decide that the parcel of land they wanted to purchase for a development isn’t much to their liking. Beaky heads off to Paris to liquidate their company and Johnnie goes with him as far as London…apparently. So it’s something of a shock to Lina when the newspapers print that Beaky has died in Paris in the company of an unknown Englishman.

Things get even more suspicious (to coin a phrase) when Lina finds out other information about her husband. He’s been spending a great deal of time reading murder mysteries and has been spending a lot of time with local mystery writer Isobel Sedbusk (Auriol Lee) and her coroner brother Bertram (Gavin Gordon). He’s been inquiring about poisons that can’t be detected. More disturbing, Lina discovers that Johnnie has been attempting with no success to borrow money against her life insurance policy.

Suspicion is another one of those films where one of the major selling points is also one of the biggest issues with the final product. In two words, it’s Cary Grant. Grant was almost always compelling on screen and a lot of fun to watch, but as much as it pains me to say this, he feels badly miscast in Suspicion. Grant could do roles that contained a great deal of drama in them, certainly, but he was always at his best in light romantic comedies. The role calls for someone of irrepressible charm, and that’s certainly Grant. The problem is that the role also calls for us to be consistently suspicious of his motives and actions, and it’s difficult to see Grant in that sort of light. He’s too likable and we’re too used to seeing him as the charming good guy to really readily accept him as a killer.

It’s really Joan Fontaine who is central to the film, though, since we see everything through her perspective. Everything we know in the story we know because it’s something that Lina has discovered. Because of this, Lina is our eyes and ears through the film. Her suspicions become our suspicions. It’s an interesting tightrope that she walks in the role of Lina. She’s completely vulnerable, but also has to show tremendous strength in moments, even though those moments seem to drain Lina terribly.

What doesn’t work for me are the attempted lighthearted moments. In the scene where Johnnie is confronted with the selling of Lina’s antique chairs, he and Beaky attempt to make her laugh and smile by tickling her, making faces, and with Beaky making duck noises. This is right after he’s done something really damaging to her, and when it turns out that he’s made a great deal of money on a bet and bought the chairs back, it suddenly becomes a fun scene. And then moments later, Beaky nearly kills himself with a snifter of brandy, shifting the mood suddenly again. It’s a bit bipolar.

Suspicion is solid, but I’m not convinced it’s top-tier Hitchcock. I like the performances here almost in spite of the roles they are in service to. Fortunately for all of us, Hitch got a lot better over the course of his career.

Why to watch Suspicion: Hitchcock starting to hit his stride.
Why not to watch: Cary Grant is a hard sell as a villain.