...And Straight on 'Til Morning 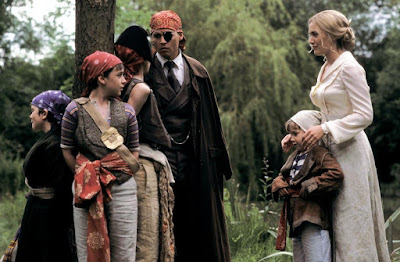 I don’t have proof of this, but I suspect that the reason Johnny Depp wanted to play J.M. Barrie in Finding Neverland is that he got to dress up like a pirate for part of it. Depp has been nominated for Best Actor three times. He played a pirate for one of these roles and a mass murderer for another. It certainly seems to fit that he’d also be nominated for a role in which he plays a man whose most famous creation involves a murderous pirate.

Finding Neverland isn’t the story of Barrie’s life, but the story of the creation of Peter Pan, Barrie’s enduring play/movie/book/childhood experience. As the film starts, Barrie’s latest play, financed by Charles Frohman (Dustin Hoffman) has turned out to be a bust and a financial failure. Barrie, looking for new inspiration, spends his days at a nearby park. It is here that he meets the Davies children: George (Nick Roud), Jack (Joe Prospero), Peter (Freddie Highmore), and Michael (Luke Spill).

Barrie is immediately taken with the boys and makes the acquaintance of their mother, Sylvia Llewelyn Davies (Kate Winslet), a woman recently widowed and left without an income. Barrie, interested in the boys, particularly Peter who seems to have lost his childhood with the death of his father, soon befriends them and spends a great deal of his time playing with them. These play sessions are elaborate dramas—pirates, Indians, and the like. Three of the boys seem to take to the fantasy willingly while Peter has trouble engaging his imagination to join in.

All of this seems very strange to many other people, considering the fact that Sylvia is a widow and Barrie is a married man. In particular, Barrie’s wife Mary (Radha Mitchell) is disturbed by him spending so much time with another woman and her children. Equally disturbed is Sylvia’s mother, Emma du Maurier (Julie Christie). Barrie does not relent, though, which leads to the destruction of his marriage. When Sylvia becomes increasingly ill, Barrie takes his experience with her boys over the summer and pens Peter Pan. The rest, as they say, is history.

One of the biggest sells here is not the casting or the performances, but the set design. In fact, the flights of fancy that happen while Barrie is playing with the Davies children happen too rarely, because they are exceptional. When pretending to be pirates, they are truly standing in something like a garden, but in the imaginative world they are creating, it becomes something like a stage play, a cartoonish reality, with a pirate ship made of stage scenery. It’s rather beautiful. When we reach the Neverland of Barrie’s imagination, it is a true fantasy world contained within a backyard, and it’s pretty amazing. I could have stood quite a bit more of this, because it’s the most interesting aspect of the film.

Depp’s biggest flaw as J.M. Barrie is his accent. Had I not done a little digging, I’d have suspected that Barrie was an Irishman based on the accent that Depp adopts throughout. He wasn’t—he was a Scotsman. While his accent is relatively consistent, it seems strange to give the man a completely different ancestry. Still, Depp is a good choice for the role. There is something of an innocent about him when he wants to have it—there’s still just enough of Edward Scissorhands in the man that he can at least pretend to be childlike.

It’s Freddie Highmore who is the true discovery here, though. Highmore had had a few roles before this one, but Finding Neverland was his breakthrough. In fact, Depp was evidently so impressed with him that he insisted Highmore be cast in Charlie and the Chocolate Factory. And the rest, as they say, is history.

I suppose that the main issue I take with Finding Neverland is that I’m not sure how much it will stay with me. It’s a good story and a good film, but I’m not sure it will prove to be a particularly memorable one. In fact, only the parts of the film that exist in Barrie’s imagination seem to have any staying power. In its favor, it’s a film that could have gone in a number of directions, but it chooses instead to be almost endearingly innocent. It could become cynical easily and doesn’t. It could just as easily become cloying and manages to avoid this as well. In that respect, it gets the tone just about perfect.

In enjoyed Finding Neverland, but I enjoyed it in the same way I enjoy a lot of desserts. It’s good and delicious in the moment, but ultimately kind of unsatisfying.

Why to watch Finding Neverland: It’s surprisingly heartfelt when it could easily have been cynical.
Why not to watch: Evidently, Johnny Depp thinks the Scottish J.M. Barrie arrived in England by way of Dublin.