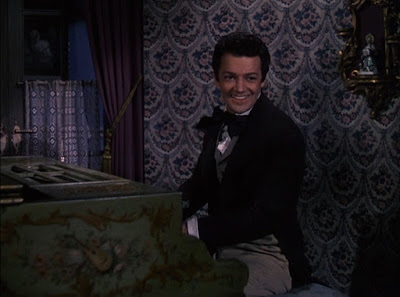 I can’t claim to have entered A Song to Remember with my normal neutrality. The truth is that I’ve only liked Cornell Wilde in a single film and I haven’t been impressed by Merle Oberon beyond her beauty in anything. A movie that puts them as a romantic pairing is, to me, the bland mating with the wooden, and it’s difficult to work up enthusiasm for that. Fortunately, there’s an interesting historical context to put A Song to Remember in, one that makes this far more interesting than it might have otherwise been.

This is the story of Frederic Chopin, the great Polish composer, best known for his waltzes. Chopin, greatly acclaimed, died young, and A Song to Remember attempts to tell us why. We start with the young Chopin (played as a youth by Maurice Tauzin) and his instructor, Professor Joseph Elsner (Paul Muni). Young Frederic is a talented pianist and even a budding composer before his 12th birthday, but is terribly troubled by the problems of Poland, specifically by Poles being taken into custody by Russian authorities.

Flash forward a decade, and Chopin is still in Poland despite Elsner trying desperately to get him to Paris. By this time, both Chopin and Elsner are deeply involved with covert political activities. When Frederic is asked to give a command performance, he does so, but storms off when the Russian governor of Poland arrives. This suddenly puts his freedom and life in jeopardy, so he and Elsner rush off to Paris.

The initial reception in Paris is chilly, but the pair make a couple of important friends. First is the arguably first-ever pop star Franz Liszt (Stephen Bekassy), who becomes a champion of Chopin. Second is the influential music dealer Louis Pleyel (George Coulouris). Third is novelist George Sand (Merle Oberon). Sand is a controversial figure in early 19th century Paris, a woman writing under a man’s name so that she will be taken seriously as a novelist. Further, Sand is something of a scandal by not following any common conventions—most notably, she wears men’s clothing. She and Chopin are almost immediately an item, much to Liszt’s amusement and Elsner’s trouble.

As depicted in A Song to Remember, George Sand is manipulative and domineering. She immediately takes complete control of Chopin’s life. While Chopin is incredibly productive in terms of composing, he no longer gives concerts, citing his poor health. That is part of the reason, but the other part is the control that Sand exerts over him, keeping his performing genius all to herself. Elsner is completely forgotten. Worse for him, Chopin seems to have entirely forgotten the struggle in his native Poland. Eventually, a former Polish colleague arrives in Paris to help Chopin restore his memory and return him to the writing of inspirational music for the people of his native land. Spurred by this and despite his failing health (probably from tuberculosis), Chopin goes on a fatal tour of Europe to raise money for the Polish resistance.

Well, come on. You knew he died young. I said that in the second paragraph.

There are two saving graces to A Song to Remember. The first is the music. While my classical tastes don’t tend to run toward Chopin in general, it’s hard not to like the music in the film. Many of these songs are immediately recognizable, and they are played brilliantly throughout. In that respect, A Song to Remember has some of the same power as a film like Amadeus, where the music is as much a character as anyone on screen. It’s not as good as Amadeus, mind you, but it’s pretty fine.

The second thing worth noting in A Song to Remember is the scenery-chewing performance of Paul Muni. Poor Paul Muni seems to have been forgotten by most modern audiences in the way that some stars of this era have not. His greatest strength was to be a chameleon on screen, which is the reason he’s not easily remembered—there’s no Paul Muni-type of role. Here, Elsner is by far the most interesting thing on screen in every scene he’s in, and that all comes from Muni’s long experience. Frankly, he should have been Oscar-nominated, not Cornell Wilde.

The biggest drawbacks are the persons of Cornell Wilde and Merle Oberon. Wilde is plain yogurt on camera. He had good looks and not a lot to back it up. In this, he frequently looks like he’s listening to a mildly interesting lecture until the final 15 minutes when he looks either dyspeptic or, when performing, is merely covered in sweat and looks dyspeptic. Merle Oberon was normally quite the beauty, but in this, her hairstyle has odd wings and she just looks constantly like a mildly peeved nanny. Her looks were pretty much all she had on camera, and there’s not much here done to do her a lot of favors in the last half of the film.

I think this is supposed to be a tragedy, or a tragic romance, but it’s neither. Frankly, you’d be better off watching Paul Muni in other movies and buying a collection of Chopin’s waltzes than you would be watching this.

Why to watch A Song to Remember: The music and Paul Muni.
Why not to watch: Cornell Wilde’s blandness is matched only by Merle Oberon’s woodenness.

Posted by SJHoneywell at 8:06 PM