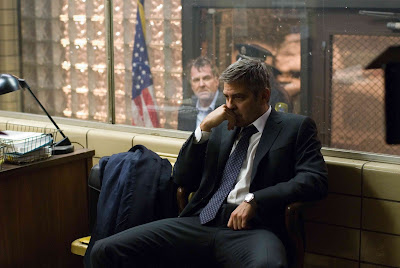 I’m not entirely sure what I think of George Clooney as an actor. There are times when I really like him, when he seems like the right guy to be there, and times when I think he’s just relying entirely on being George Clooney. He’s hit or miss with me, which leaves me wary. Michael Clayton is clearly his movie, despite Tilda Swinton winning the only Oscar out of its many nominations. Honestly, I only recorded this because I scrolled past it and I didn’t know what to expect from it.

Michael Clayton is the story of a lawyer who both has problems and whose main talent is fixing problems. Our titular character (played by the aforementioned George Clooney) is currently about 75 large in debt to a loan shark. The debt comes from a restaurant he and his brother attempted to open. Sadly for Michael, his brother is a junkie and used the money to fuel his drug habits, leaving Michael—who refuses to sell out said brother—on the hook.

While this comes up multiple times during the film, the main story concerns a legal case that has been going on for years. A company called U-North is in the middle of a class action lawsuit because of one of their pesticides, which might be linked with cancer. Distressingly, the lead counsel on the case, Arthur Edens (Tom Wilkinson, who as nominated in a supporting role), has had a psychotic break. Edens is bipolar and has gone off his meds, which has led to him stripping down to his socks during a deposition. Michael is sent in to reign in Arthur, which happens only temporarily. Arthur has decided he likes being off his meds. More importantly, he’s discovered a memo that clearly indicates that the top brass at U-North—including the company president (Ken Howard) knew about the carcinogenic product. U-North’s lead counsel, Karen Crowder (Tilda Swinton), realizes what is going on and sets her own team in motion to shut Arthur up.

What we get, then, is murder arranged to look like a suicide or a drug overdose and a car bomb planted in Michael’s car. His own life starts spinning out of control as well. It’s hinted at several times during the movie that he’s had a past gambling problem that he has overcome, so it’s not a terrible shock when we see him eventually at an underground poker game. He’s also getting pressure from his boss (Sydney Pollack) and other high-placed lawyers in his firm, particularly Barry Grissom (Michael O’Keefe) to essentially take enough money to pay off his loan shark problem as a “bonus” to keep quiet about what has happened with Arthur and with what U-North is doing. Of course, a car bomb would allow everyone other than Michael to escape without additional fiduciary liabilities.

So all of this comes down to a crisis of conscience. Will Michael, despite the attempt on his life, take the money and clear up all of his problems? Will he take a stand for his murdered friend? All of this comes to a head in the final minutes of the film, so it waits until then to let us know even what he’s thinking.

Michael Clayton is one of those films that is filled with unlikable characters. Virtually no one here is a decent human being at all, and yet these are the people we’re given to deal with. None of these people aside from a couple of the side characters are people we’d be willing to bring home to dinner. Some of them may well be the type we’d want on our side in a legal battle, but even then we’d feel dirty.

So let’s talk performances. George Clooney is front and center here, and it’s interesting to see him play someone this unlikable. Clooney in a criminal role is generally a sort of affable rogue, a Danny Ocean type. Here, he’s a hardass, plays for keeps at all times, and is tightly wound. It’s a good performance, albeit one of an ugly and pitiless character. Tilda Swinton is much the same. She is perhaps the most ruthless character we have here, someone who is bound and determined to cover her own ass at all times no matter the human cost to anyone else. Tom Wilkinson is perhaps the only major character who is likable at all, and he’s off his nut. I find Tom Wilkinson easy to like in most movies, and I like him here, too, crazy train and all.

Where I’m the most surprised is in the Best Director nomination. This seems like one of those cases where the director—Tony Gilroy—simply got out of the way and let his actors perform a very good and layered script while trying not to mess it up. It’s worth noting that the screenplay is pretty smart in a lot of places, even if it’s a bit denser than it needs to be. Gilroy is responsible for that, too. I like the basic story here; I’m just not sure that I need all of the little bells and whistles that are added onto it. There was no need, for instance, to turn Michael Clayton into a man with a gambling problem. It adds nothing but clutter to someone already cluttered enough. The bad investment and loan shark are really enough.

This was good, but I’m not sure it would qualify as great. I like the performances more than I like anything else about it, which speaks well for those performances and not so well of everything else.

Why to watch Michael Clayton: A pretty solid story.
Why not to watch: Lots of loose threads.