Films: The Pride of the Yankees
Format: DVD from Sycamore Public Library on rockin’ flatscreen. 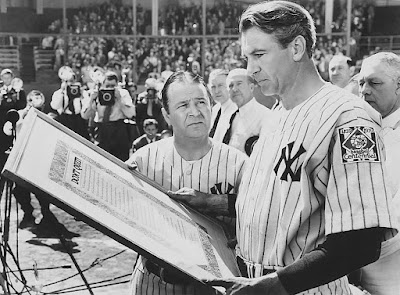 Every so often, an actor or a director has a year for the ages. Consider Victor Fleming’s 1939 when he made both Gone with the Wind and The Wizard of Oz. Teresa Wright had that sort of 1942. Wright was nominated for Best Actress in The Pride of the Yankees, but lost to Greer Garson. As it happens, Wright was also in Mrs. Miniver and won and Oscar for Best Supporting Actress for that role. Like a said, she had a good year. The Pride of the Yankees is one of those all-American films, one that can probably be appreciated by many, but can really only be fully understood by people who have grown up in a culture where baseball has truly permeated society.

The Pride of the Yankees might be a warts-removed biography of Lou Gehrig, but that really doesn’t bother me at all. It’s an exercise in myth making and hero creation, and that’s really what it should be. This is a film about a genuine American sports hero, a man who truly crafted a legend for himself, and with the world suddenly at war, the American people needed heroes. They needed to be reminded of courage, honor, and greatness. The Pride of the Yankees might have removed a couple of warts, but do we really need this hero tarnished? The other thing is this—from all reports, Gehrig is the nice guy depicted here.

This is the Lou Gehrig story. Gehrig had a legendary career for the New York Yankees, playing in more than 2100 consecutive games across 16 season—a record that stood for decades. We start with him as a child and quickly move to him as a young man in collect. Except for those opening scenes, Gehrig is played by Gary Cooper. This works late in the film, but it’s a hard thing to buy in the first half of the film, with the 41-year-old Cooper playing the college-aged Gehrig.

Regardless of this, The Pride of the Yankees is less about Gehrig’s baseball career and more about his life. In fact, a great deal of the film deals with his relationship with his immigrant parents (Elsa Janssen and Ludwig Stossel) and eventually his relationship with and marriage to Eleanor Twitchell (Teresa Wright). While there’s a little bit of baseball, there’s not a lot. In fact, there’s more time spent with the Yankees off the field, particularly with Babe Ruth playing himself, than with Gehrig at the plate or running the bases. In all of this, Lou Gehrig is depicted as a hardworking, mildly shy, and genuinely good person.

Also running through the film is the relationship Gehrig has with sportswriter and pseudo Gehrig agent Sam Blake (Walter Brennan), a relationship juxtaposed with Blake’s partially antagonistic relationship with fellow sports reporter Hank Hanneman (Dan Duryea). Throughout, Blake acts as Gehrig’s friend and apologist while Hanneman starts out as a Gehrig naysayer and ends up a fan.

So, at its basest level, The Pride of the Yankees is exactly what I said at the top. It’s myth making and hero making in its purest and done at a time when the country most needed it. In that respect, Gary Cooper is great casting. After all, he’d already been Longfellow Deeds, Beau Geste, and Alvin York. Cooper was in many ways the most American of American actors, at least in terms of image. Sure, he doesn’t look the part for the first half of the movie, but it’s pretty forgivable because Cooper is so likable and because Gehrig seems like such a genuinely likable guy. In fact, the retired Babe Ruth lost about 40 pounds to get back to his playing weight to honor the real Gehrig in the film. That’s a serious commitment, and it speaks well of Ruth and also of how well Gehrig was thought of.

Because of this, it’s kind of hard to be critical. It’s interesting that Gehrig was a lefty and Cooper couldn’t do much with his right hand. A great deal was done with some intelligent trickery—reversing uniform numbers, having Cooper bat and run to third instead of first, and then flipping the film. It’s probably because of this that there isn’t a great deal of actual baseball in the film. Well, that, and Cooper isn’t really that convincing when he stands at the plate.

Still, this is a hard film to dislike. Yes, it suffers from the same sort of potential for glurginess that many films of the era do, but in this case it works. The closing few moments of the film come across as truly heartfelt and genuine, and they work completely. Yes, there are times when I can see the potential for manipulation, and at the same time, I’m willing to allow myself to be manipulated. At the very least, it's one of the truly great film moments when Gehrig stands in Yankee Stadium and speaks to the crowd. It works and it works on every level.

Why to watch The Pride of the Yankees: Lou Gehrig was a national treasure
Why not to watch: Gary Cooper doesn’t work in the role until mid-way through the movie.