Apply Directly to the Forehead 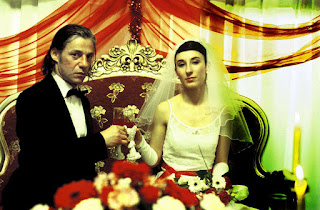 For a romance, Gegen die Wand (Head-On) contains a shocking amount of blood. Violence and death in a romance is older than Romeo and Juliet, but in the case of Gegen die Wand, I mean it in more of a literal sense—there’s a lot of visible blood going on here. This is both a modern romance and a more traditional one, and like any good romance, it contains a healthy dose of tragedy.

Cahit Tomruk (Birol Unel) is a 40-something Turkish transplant in Germany. He’s spent the bulk of his time in Germany eliminating everything Turkish in his life. We learn that his wife has died and he sees nothing positive in his life. His job is picking up empty bottles in a club. Depressed and at the end of his rope, he drives his car straight into a wall, ending up in a psychiatric clinic, since it is assumed that his driving accident was a suicide attempt. At the clinic he meets Sibel Guner (Sibel Kekilli), another Turk and another person who has attempted suicide. Sibel notices Cahit and immediately proposes marriage.

Her reason, despite Cahit being twice her age, is that she wants out of her repressive family. She wants a life, and most especially she wants an unrestricted sex life. A sham marriage would give her that freedom. To make the agreement more amenable to Cahit, she agrees to cook and clean for him and to pay half of his rent. Cahit isn’t interested, but when she attempts suicide again by slashing her wrist with a broken beer bottle, he eventually relents. He is awkwardly introduced to Sibel’s parents (Demir Gokgol and Aysel Iscan) and her brother (Cem Akin). Against their better judgment, the family agrees to the marriage.

And it is a sham marriage, at least initially. Cahit has a regular sex partner in Maren (Catrin Striebeck) and Sibel hooks up with random guys whenever she can. Over time, though, the two start to grow together. They spend a little bit more time with each other, and each is given to petty little jealousies when they see the other with a different person. Eventually, they start to fall for each other, which creates tension with Maren, since Sibel works for her. It also creates a serious problem. When one of Sibel’s former partners starts needling Cahit, Cahit attacks and kills him.

With that, Sibel retreats to Turkey, fleeing the wrath of her family and moving in with her cousin Selma (Meltem Cumbul). She finds this environment just as oppressive as Cahit finds prison, though, and she rebels again, getting herself into trouble over and over. And eventually, Cahit is released from prison and heads down to Istanbul to find his wife.

Gegen die Wand is a fascinating film, and I’m not precisely sure why. It simply is. Part of it is that it’s beautifully acted throughout. Sibel in particular is a completely out of control character, capable of virtually anything, and is compelling to watch. Sibel Kekilli is also extremely striking. Birol Unel is one of those actors who can drop twenty years with a particular expression or in a certain lighting, and this makes him compelling as well. He goes from looking hip and cool to looking haggard in a heartbeat, and he makes this ability work for him throughout the film.

A lot of Gegen die Wand is about identity, both personal identity and cultural identity. Sibel’s drive to suicide, drive to marriage, drive to Istanbul and her eventual drive to the life she makes for herself comes entirely from her desire to be her own person and live her own life, something that is impossible in the traditional Turkish family. Cahit is self-destructive because of the death of his wife, but eventually finds a strength in Sibel that gives him the will to carry on. Just as importantly, his love for Sibel even brings him back to his Turkish roots that he tried desperately to leave behind.

This isn’t a happy film, and as I said at the start, there’s a surprising amount of blood. Sibel is covered in blood multiple times, as is Cahit, and frequently, this is intentional and rather startling. The first of Sibel’s suicide attempts is extremely shocking in fact—it happens out of nowhere.

Regardless of the fact that Gegen die Wand is difficult to watch at times, and while it’s not specifically a film I can say I enjoyed, it is one that I can recommend without any hesitation.

It’s worth mentioning the scandal that came along with this film. Actress Sibel Kekilli was chosen for the role without director Fatih Akin knowing her extensive background in hardcore pornography. I leave it to you to look her up on IMDB and translate the German titles for yourself. Regardless, she’s got some acting chops, and this was her break into mainstream film.