Tune In, Turn On, Czech Out 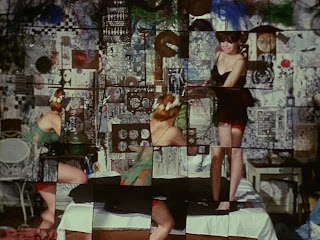 Where do I begin with this one? Put in its most basic terms, Sedmikrasky (Daisies) asks what it would be like if there were two Bugs Bunnies and they were Czech women. Of course, the film is deeper than that, but on the surface, it feels like a modernized Buster Keaton film. It’s 72 minutes of insanity and randomness, food, chaos, unfulfilled sexuality, destruction, and girl power. I’m not going to go anywhere near a plot summary, because there’s no plot here to summarize. There are a bunch of actions that all point in a direction (sort of), but a summary beyond the most cursory is impossible.

Our two consistent characters are both named Marie. While completely different in appearance, they are otherwise completely interchangeable. They aren’t two facets of the same person, but two incarnations of the same personality. One Marie is blonde and generally wears a crown of flowers (Ivana Karbanova). The other is brunette and sports pigtails (Jitka Cerhova). And what do the two incarnations of this personality do? They eat. They are constantly eating, drinking, smoking, or more accurately, they are constantly consuming everything they can. A large section of the film is devoted to their convincing men to buy them endless amounts of food before putting the guys on a train and out of their lives, the men unsatisfied.

That not enough of a feminist power statement for you? It doesn’t take a Freudian to read meaning into the scenes where the two women devour sausages, pickles, and bananas after first slicing them into pieces with scissors.

Director Vera Chytilova frequently alters the appearance of the film, switching from color to black-and-white to colored filters, splicing in montages of flowers, butterflies, words, numbers, padlocked doors, and more. Sections are sped up or otherwise altered to add to the sense of altered reality. At one point, the two girls engage in a scissors battle that affects the film itself, splintering them and their environment into a mosaic.

I don’t think I’m too far wrong in suggesting that Sedmikrasky is the sort of film that contains whatever meaning its viewers ascribe to it. There are limits to this, of course. It’s undeniably a feminist vision and equally a reaction to the oppressive Czech state of the mid-1960s, but beyond this, there’s enough going on that a lot can be red into what is presented here. There’s an overwhelming sense of the forbidden. At one point, the two Maries break into a prepared banquet and devour it. The blonde Marie tells her companion to be careful in tasting the foods so as to avoid detection, and demonstrates by running her hand through a plate of food, destroying it, before delicately picking up a small morsel and eating it. This then devolves into an orgy of consumption that sees them using each of the planned place settings in turn before devolving into a drunken food fight.

I’ve stated here in the past that I’m not a fan of clowns because they are essentially licensed crazy people, and that’s very much the function of the two Maries in this film. They are basically feminist clowns, this being made complete with the raccoon-y eye makeup they wear. They’re impossible to completely dislike, though, for the same reason that it’s impossible to completely dislike a character like Bugs Bunny. The Maries are genuinely entertaining a great deal of the time.

But parts of this go on too long. There’s a scene early on where the Maries go to a bar and watch a couple dressed as if they are from the 1920s dancing. In the background, the women cause problems and abuse the poor couple seated in front of them. This sequence lasts far too long for my money. I was tired of it and tired of the song long before the scene was over. For a short film, it would seem that there could have been something else to do with a couple of the minutes here, even if it was just another montage or two.

But overall, I was entertained. I don’t think I got everything here, but I got enough to see that it’s subversive and entertaining, and that’s enough. 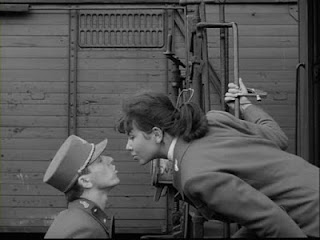 Ostre Sledovan Vlaky (Closely Watched Trains) is a film I’ve heard about for a long time, and is one that I’ve been looking forward to since I first heard about it. This is, after all, an Oscar-winning film for Best Foreign Language Film. I’ve also found that I have a tendency to like a lot of Czech films for whatever reason. Czechoslovakia has always seemed like the most Western of the Soviet satellite nations to me. This may simply be my own thinking with nothing solid to back it up, but there it is. The fatalism that exists in so many Soviet and Soviet puppet films certainly exists in many Czech films, but there also frequently seems to be a real sense of humor that comes with it. Sure, our lives are hell, the films seem to say, but there’s no reason we can’t have a laugh about it.

This one takes place at the tail end of World War II with Germany losing on all fronts. A young man named Milos Hrma (Vaclav Neckar) has begun his internship at the local train station. His goal is to work as a train dispatcher in no small part because it will mean a job with a uniform and not much work, and thus no real manual labor, which is evidently a Hrma family tradition. The stationmaster (Vladmir Valenta) has a position of importance and is free to breed pigeons, but he greatly resents Hubicka (Josef Somr) because of Hubicka’s frequent success with women.

See, while the war is certainly central to the plot of the film, it’s really more or less here as a sort of cover story to disguise that this is actually a coming of age story, and about as close as a 1960s era Czech filmmaker could come to producing a comedy about sex. Make no mistake—this is really all about sex and about Milos discovering it. He has a girl he is very interested in, and it’s evident that Masa (Jitka Bendova) is interested in return. But interest isn’t enough, as Milos’s virgin status attests. Thus, Hubicka sets himself to the job of helping Milos lose this virginity problem.

No one will accuse Ostre Sledovan Vlaky of being laugh-out-loud funny, because it isn’t, but it is funny. And except for the war stuff, it all relates back to sex. We spend some time with Milos and Masa with Masa’s uncle, who takes souvenir-style photographs and has wandering hands for all of his female customers. And while Milos and Masa spend a night together, a series of events prevents Milos from consummating their relationship. There’s good humor here, and much of it comes in little touches, like Milos evidently insisting that he wear his uniform hat to bed. Even more of the humor comes from the lack of consummation of the relationship being almost entirely the fault of Milos, who is both too nervous and too eager. Milos’s failed attempt at sex with Masa causes a suicide attempt, and there is even humor here, although it is of the darkest variety. He fails in this because a workman fixing a wall breaks into the room of the bordello that Milos has checked into specifically to kill himself.

And yet, for all of the focus on sex and the desire for sex and the frustrated lack of sex, this is still very much a war film, and the war is central to everything that happens. The return of Milos to the train station sees him getting involved with the Czech underground against the German occupiers, a turn of events that drives the second half of the film. Well, that and Hubicka’s dalliance with the telegraphist (Jitka Zelenohorska), which leads to a number of consequences for the stationmaster.

There is a strange sweetness to this film, a pained naivety in the character of Milos Hrma it is impossible to dislike. The poor guy just wants to fit in and doesn’t have a single clue as to how to do it. This comes almost entirely from the sympathetic performance of Vaclav Neckar, who has the face of a boy and the eyes of a man deep in suffering.

I don’t know if this film, or if Cold War-era Czech film is for everyone, but this one worked for me start to finish. I’d have liked a different ending is all.

Why to watch Sedmikrasky: It’s a live-action Czech Looney Tunes cartoon.
Why not to watch: At 72 minutes, parts still go on too long.

Why to watch Ostre Sledovan Vlaky: Czech films are frequently surprising.
Why not to watch: Ouch, that ending!