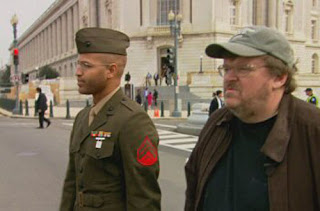 If I’d had my druthers, I’d have never watched Fahrenheit 9/11 I’m not the biggest fan of Michael Moore mostly because his films eventually aren’t about the planned topic, but about Michael Moore. Every documentarian places his or her spin on whatever topic he or she is making a film on, but few are as blatant as Moore. But I’m a slave to the list. It appears, I watch. I should say in the interest of full disclosure that I swing politically to the left, particularly on social issues. I’m more an economic centrist. But a lot of Moore’s films should be right in my left-leaning social wheelhouse. They just aren’t.

Fahrenheit 9/11 is about September 11, 2001 and the aftermath as well as (and really, predominantly) the war in Iraq that followed 18 months or so afterward. And, as is typically the case, Moore creates a compelling argument for his point of view. Kind of. Actually, I think this film is in many ways less compelling than the arguments he puts forth in Roger & Me or Bowling for Columbine. The biggest reason for this is simply the scope. Rather than focusing on the aftermath of 9/11 or the war in Iraq, Moore takes on everything from the disputed presidential election that put George W. Bush in the White House through to the war and the non-existent weapons of mass destruction.

It is angering, of course. Only the most ardent Bush supporter can look at the extremely dubious causes for the war in Iraq and not find something to be upset about. And therein lies something of the problem I have with this film. The story is already compelling enough as it is—it already reeks of scandal and the use of improper authority, it already contains hundreds and thousands of broken and destroyed lives. We don’t need Moore to place himself at the center of the conversation, and yet there he is. Because Moore can’t get away from putting himself front and center whenever possible, the film becomes less about its purported topic and more about Michael Moore, angry filmmaker.

And this leads me to my second, larger problem with this film and with Moore as a filmmaker in general. There is a large section of the film devoted to a family who lost a son in combat oversees. It is, of course, tragic, as is any loss like this. But I couldn’t help but wonder as I watched this poor woman, grieving for the loss of her son and experiencing a pain unlike anything I’ve had to endure, is this simply Moore manipulating me? I have not a single doubt that this woman’s pain was real and was of an intensity that I can only scarcely imagine. But do we need to see it? Is publicizing her grief beneficial, or is it merely something that works into the stated agenda of the film in a compelling way?

In short, Fahrenheit 9/11 made me not only more cynical about the wars that we started in two countries overseas within the lifetimes of my children, but cynical about what Michael Moore as a filmmaker is trying to do. This can’t be a good thing from the standpoint of the audience. A slanted argument is still a slanted argument no matter how much I want to agree with the stance it takes.

I can’t help but compare this film with one like Jesus Camp, which portrays a similar group of people in many ways. As with the people front and center in Fahrenheit 9/11, Jesus Camp depicts a group of people who are completely sure of their moral correctness and of their position on all things. They are equally self-convinced of what they believe and what this should allow them to do. The difference is that the makers of Jesus Camp present the film without comment, allowing the people themselves to tell their own story and allowing the audience to make up its own mind. Moore wants to make up our minds for us, which makes him less of a documentarian and more of a polemicist. Ultimately, that’s not very interesting to me.

And so, Fahrenheit 9/11 is an undeniably well-made film that presents a strong, if unfocused and too-broad case. It’s biggest weakness is its inability to let the viewer have anything other than the opinion its highly controversial central personality demands. Moore is a better filmmaker than this; hell, this film is in many ways a better film than this, but it was too easy to let ego get in the way.