Film: One Flew over the Cuckoo’s Nest
Format: DVD from personal collection on laptop. 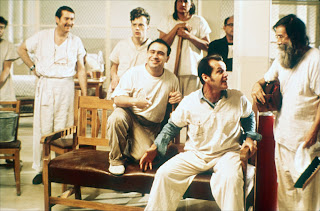 When you spend enough time with a list like the 1001 Movies, you start to notice that certain people show up again and again. This isn’t coincidence. When you look at the great actors of any generation, they are considered great actors for a reason, whether it’s from being a great actor (likely) or simply choosing well over and over (also likely), certain actors simply have careers of legend. John Cazale, who went five-for-five with films nominated for Best Picture is the winner in this particular rodeo, but there are others who come to mind. Olivia de Havilland shows up a lot, as do Humphrey Bogart, James Stewart, and many others. One of those others is Jack Nicholson, who is rightly the most celebrated actor of his generation. Even the greatest actor of his generation has a greatest role and a greatest film. For Nicholson, my vote will always be One Flew over the Cuckoo’s Nest.

This is a film that certainly summarizes well, but I’m not going to summarize it beyond the very basics. Randle P. McMurphy (Nicholson) is sent to the state mental institution from prison because it is believed that he might be mentally ill. This comes in part from the series of brawls he’s been in, his current charge of statutory rape, and his shirking of the work detail. Once there, McMurphy battles with Nurse Ratched (Louise Fletcher) and bonds with the collection of variously insane men, slowly losing his sanity in the process, this in no small part because of the cold, sadistic nature of Ratched.

The story, of course, is a compelling one, and can’t help but be so. But a compelling story does not specifically make a great film. What sells this, start to finish, is some of the greatest performances of the 1970s wrapped up in a single film. One Flew over the Cuckoo’s Nest is lightning in a bottle; it has a stellar cast, all of whom are at the absolute top of their game.

The relevant inmates are Martini (Danny DeVito), Sefelt (William Duell), Cheswick (Sydney Lassick), Taber (Christopher Lloyd), Harding (William Redfield), the Chief (Will Sampson), Fredrickson (Vincent Schiavelli), Scanlon (Delos V. Smith, Jr.), and Billy Bibbit (Brad Dourif, who was Oscar nominated for this, his first film role). It’s a hell of a great cast, and each one plays the role as well as could be imagined. Also worth mentioning are Scatman Crothers as a night watchman and Michael Berryman before he did The Hills Have Eyes.

There are also incredibly memorable scenes, and it wouldn’t be too far wrong to suggest that almost every scene is a memorable one. Some stand out in particular. The basketball game and the fishing trip are two moments of genuine joy in a place where such things don’t happen. There are brief moments of light like these, and they are necessary. The reveal with the Chief is perhaps the greatest moment in the film, particularly because of what comes right after. Without them, this film would be oppressively dark.

There is a great deal of darkness here, and again, there are standout scenes, and it is impossible to determine which is the most telling. The meetings led by Nurse Ratched are the heart of the film in many ways. It’s here that Ratched’s sadism and cruelty are most evident, and all the more terrible for how frequently her evil is calm. Nothing is more awful than the electroshock therapy, however, and nothing has come close to it until the similar sequence in Requiem for a Dream. There are distinct parallels in the character of R.P. McMurphy and a character like Luke from Cool Hand Luke. In both cases, these are men who run afoul of authority because they cannot otherwise be tamed. They are personalities too big and too much for the world. There’s something about characters like this that speak to us, or at least speak to something American. I can’t answer for those who grew up in other cultures, although my guess is that this is a character archetype that isn’t completely unknown elsewhere. We like the loner and the rebel. We like the person with the insane courage to hew his own path, damn the cost.

One Flew over the Cuckoo’s Nest is one of those incredibly rare films that won five major Oscars—Best Picture, Director (a very deserving Milos Forman), Actor (Nicholson), Actress (Fletcher), and Adapted Screenplay. It earned every one. It’s the sort of film that would be in the running now if it were released now. It says something about Nicholson that as much as this is his greatest role, it’s not one that specifically defines him. It is the defining role for Louise Fletcher (how quickly can you name another of her films without going to IMDB?).

The biggest issue for me with a film like this is that it’s impossible to write about cogently without repeating so much of what others have said. So I’ll stop now. If you haven’t seen this, you must. If you have, you know why.

Why to watch One Flew over the Cuckoo’s Nest: It’s absolutely essential viewing.
Why not to watch: It’s brutal.