Film: Willy Wonka and the Chocolate Factory
Format: DVD from NetFlix on laptop. 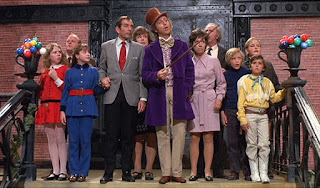 I suppose that there are people older than 20 who haven’t seen Willy Wonka and the Chocolate Factory, but I can’t really imagine how that is the case. I’m overstating, of course—there are plenty of “everyone’s seen it” films that I’ve missed. And part of this is my own childhood. This was the first movie to every really scare me (more on that later). I’ve seen the remake as well, and while that version is far more faithful to the book, I’ll always have a warm fuzzy for the original version of the film. Yeah, I’m tipping my hand early.

Charlie Bucket (Peter Ostrum) is the only child of a widowed mother (Diana Sowle) and four bedridden grandparents. Charlie lives in an unknown part of the world—it looks a hell of a lot like Germany (where it was filmed), but everyone speaks English. No matter. Anyway, Charlie’s family is so unbelievably poor that he is forced to work after school, and on his first payday he buys a loaf of bread to supplement the family’s typical diet of thin cabbage soup.

Wherever he lives, he lives in the town that houses the Wonka candy factory. The great mystery of Wonka’s factory is that no one ever enters or leaves, and yet candy pours out by the metric ton. Suddenly, factory owner Willy Wonka announces a contest: he places five golden tickets inside five of his giant candy bars. Those who find the tickets will receive a lifetime supply of chocolate and (most importantly), a tour of the factory.

The whole world gets Wonka fever, and over time, four of the tickets are found, each one by a particularly awful child. Eventually, the fifth ticket is found, but is discovered to be a forgery. This happens immediately after Charlie finds some money in the street and buys a Wonka bar, which, of course, contains the real fifth golden ticket. On his way home, he is accosted by a man who claims to be Wonka’s biggest rival, Arthur Slugworth (Gunter Meisner), who has appeared next to all of the other ticket winners. He tells Charlie that Wonka is working on a new invention that he wants. Charlie runs home, and suddenly Grandpa Joe (Jack Albertson) is able to walk and dance after twenty years of lying in bed (and he’d certainly be well-rested).

And so we go to the factory where we are introduced to Willy Wonka (Gene Wilder) himself. The factory inside is a wonderland of weirdness featuring a series of little people called Oompa Loompas. One by one, the children are picked off by falling prey to something horrible. This is the entire second half of the film, and it follows a basic patter. Wonka shows everyone a wonder or two from his factory, one of the kids has some significant misadventure, and everyone moves on.

The kids, in the order the vanish, are Augustus Gloop (Michael Bollner), who very much represents gluttony and kids who are overindulged by their parents; he’s there with his mother (Ursula Reit). Second to go is the obnoxious Violet Beauregarde (Denise Nickerson), a snotty gum chewer, who leaves behind her father (Leonard Stone). Third on the list is Veruca Salt (Julie Dawn Cole), spoiled rotten. Her father (Roy Kinnear) attends as well, and is the one parent who falls prey to the same trap as his child. Fourth on the list is Mike Teevee (Paris Themmen) and his mother (Dodo Denney). Each child falls victim to his or her own particular vice. Eventually, there’s only Charlie left.

Throughout, there are plenty of songs, ones that even those rare people who have never seen this would recognize—The Candyman, Pure Imagination, and (of course) the songs sung by the Oompa Loompas. It also quickly becomes evident that poor Peter Ostrum can’t sing a damn note. Fortunately, he doesn’t sing that much, and everyone else appears to be able to carry a tune.

There are a bunch of notable scenes. The first is the group’s entry into the factory and the chocolate room. I imagine that it looked like something back in the day—today it looks quite a bit less than it is supposed to, but it’s still pretty magical, and it’s one of Gene Wilder’s best moments in the film. Following hot on its heels is the boat ride from hell, featuring footage of lizards eating insects, large millipedes crawling on people’s faces, and a chicken being decapitated. It’s also Wilder’s most prominent moment of pure insanity. Following this is the invention room, where I lost it as a kid. See, this is where Violet Beauregarde turns into a blueberry. As a kid, blueberries were my favorite, and there was a part of me that thought that in eating as many blueberries as I had in my lifetime, I’d probably committed cannibalism at some point.

There’s more, of course, but there are only two options here. First, you’ve seen the film and you know exactly what happens with the fizzy lifting drink and how each of the other kids meets his or her confectionary demise. The other possibility is that for some reason you’ve missed this film for a bunch of years and should really discover it yourself.

For as much as Jack Albertson and Peter Ostrum are central to this film, it is first and foremost Gene Wilder’s film. This is in spite of the fact that he doesn’t show up at all for the first 45 minutes or so. It is his performance, more than the candy room or the memorable songs that makes this film the classic it has become. Wilder’s performance is equal parts genius, childlike wonder, and complete insanity, and in a career of great performances and memorable roles, it is perhaps his greatest and most memorable.

Not bad for a film original created to sell candy bars.

Why to watch Willy Wonka and the Chocolate Factory: A genuine classic that really is for kids of all ages.
Why not to watch: After 40 years, it’s not as magical as it once was.