Film: O Pagador de Promessas (Keeper of Promises; The Given Word)
Format: Video from The Magic Flashdrive on laptop. 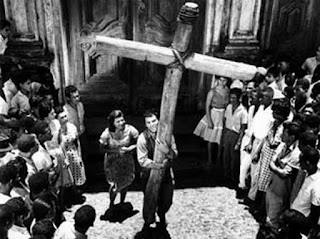 Watch enough movies and you develop a sort of multiple personality for certain plot points. Sometimes they or a particular character mean one thing, sometimes they mean the opposite. Take, for example, the case of a naïve. There are times in the world of films when it seems that the naïve is truly blessed and that the world was made specifically to cater to a truly naïve character. Other times, in a dark and cruel film world, this world becomes a sort of hell, and everything is set to eventually destroy a character. If you think that O Pagador de Promessas (The Given Word, sometimes called Keeper of Promises) is the first kind, you’re in for a terrible shock.

Ze de Burro (Donkey Jack, played by Leonardo Villar) carries a huge wooden cross from his small farm to the nearest church dedicated to Saint Barbara, which is a good seven-mile walk. He does this because he asked for a miracle to save Nicolau, his donkey, who also happen to be his best friend. When he and his suffering wife Rosa (Gloria Menezes) arrive at the church, it is closed and soon begins to rain. Rosa is taken to a hotel by Handsome (Geraldo del Rey), a local pimp, who preys upon her, evidently to turn her into his new cash cow.

Eventually, Ze de Burro meets Olavo (Dioniio Azevedo), the priest of the church Ze has dragged the cross to. Ze reveals the whole story here, telling of his desperation for the imminent death of Nicolau, and how he tried everything. Eventually, Ze went to a pagan church, making a prayer to a particular deity that he believes is the indigenous version of Saint Barbara. The priest has a different opinion and refuses Ze’s entry and the entry of the cross into his church.

From this point forward, almost everything that happens does so because of Ze’s essentially naivety and his inability to really act in his own interest. The priest believes that Ze is Satan incarnate and refuses his entry to the church. The police refuse to allow him in, but similarly refuse to arrest him. Local news media takes a hand, declaring that Ze is a new Christ and a communist bent on agrarian reform. Pilgrims start showing up, begging Ze for a cure to their maladies. And Handsome wants nothing more than to turn Rosa into his new streetwalker. Even the man who runs the shop across the street from the church offers free food to the couple, since their arrival and all of the media attention has been good for his business and he wants Ze to stay where he is and to keep driving business.

O Pagador de Promessas is not a happy film, but one of exploitation of the lives of the poor and naïve Ze and of his somewhat less simple but still naïve wife. Motives and powers are ascribed to Ze that he never claims for himself and he ends up as the center of a massive controversy that he wants nothing to do with. After all, for him, this is nothing more than fulfilling the promise he believes he made to Saint Barbara.

It’s difficult at times not to call this a comedy, a very black and terrible comedy. It reminds me in a way of my friend Mark, who once confessed to me that King Lear was one of the funniest things he had ever read. It’s funny, Mark said, because Lear does everything wrong and is too stupid to realize that every decision he makes is the wrong one. It’s similar here. Ze actually makes few decisions, but everything that happens to him happens because he is unable to see or understand the wider world or the motivations of anyone who doesn’t have his simple faith and trust. It should not come as much of a surprise that nothing ends well here, at least for Ze, who seems to be destined to end up as a martyr to someone else’s cause.

This is not a film that I enjoyed much, although I recognize just how well it was made. It is a good flim and worth seeing, but ultimately a frustrating one because of the stupid obstinancy of Ze, who wants only to drag his cross into the church and be done with it. But Ze’s life quickly becomes not his own, and is instead lived at the whim and behest of larger men. And so, while I see that Anselmo Duarte’s film is an important one, I also see that there is little here that allows me to truly recommend it. I’m happy that I saw it for its more intense qualities, but I can’t say that I have a great deal of sympathy for anyone involved in the film’s story.

Why to watch O Pagador de Promessas: It’s a story unlike any other.
Why not to watch: You’ll wonder just how much of a rube one guy can be.