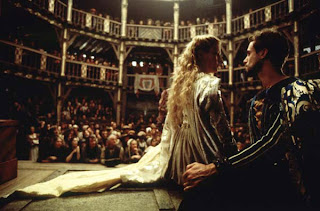 Shakespeare in Love is a film that I’ve consciously not watched, mostly from the intense backlash the film received starting the moment it won Best Picture. For a lot of people, it’s proof positive that a good campaign around Oscar time can work. After all, in the minds of many, this is a frilly period romance that took down Saving Private Ryan and The Thin Red Line. This sort of backlash isn’t really that uncommon. Any film that gets a huge amount of acclaim experiences it at least a little, and when there are other worthy films involved, the backlash is bigger, stronger, and lasts longer.

But that’s hardly the fault of the film. Shakespeare in Love is very much a period piece, and very much a Harlequin romance. I refuse to use the term “chick flick” because I think it’s demeaning, but when that term is used, this is the sort of film that people think of. It’s a film that trades initially on the romance, plyas up the romance throughout, and even contains an additional romance within the romance, since it’s as much about Romeo and Juliet as it is about young Billy the Shake finding an agreeable sheath for his spear.

Anyway, Shakespeare (Joseph Fiennes) is the playwright for Phillip Henslowe (Geoffrey Rush), who is badly in debt. He’s working on a comedy tentatively called Romeo and Ethel, but when he discovers his current mistress is cheating on him, he burns the script and starts over. Regardless, casting begins for the play immediately. The part of Romeo goes to a young man named Thomas Kent, who (paralleling many of Shakespeare’s plays) is actually a woman named Viola de Lesseps (Gwyneth Paltrow). Frankly, she’s about as convincing as a man as I would be as a supermodel, but this all fits with the “life imitating art” theme of the script. It’s an important point, though, because a woman on stage was considered the height of indecency at the time.

Naturally, Will chases her down, discovers she’s not only a woman but also an ardent fan of his writing, and the two are immediately lovers. This is a problem for Viola because she is betrothed to Lord Wessex (Colin Firth), who is bluntly marrying her for the family money. Wessex plans to take Viola with him to his new plantations in Virginia, which means that both Viola and Will know that their romance is tragically doomed.

And so Ethel becomes Juliet and the play becomes a tragedy. Shakespeare makes a bet with Wessex that a play can be produced that shows the true nature of love (which becomes Romeo and Juliet, of course), so that figures in as well. And there’s the scandal of a woman on stage, which comes back when the boy playing Juliet hits puberty and his voice changes. Oh, and Queen Elizabeth I (Dame Judi Dench) shows up for a couple of scenes, steals the show every moment she’s in it, and seems to know everything at all times about everyone.

It’s difficult for Shakespeare in Love to not be at least entertaining, since it comes with a script written by the great Tom Stoppard, and it is entertaining. It’s also completely self-aware, and makes some jokes that are specific to knowing about Shakespeare’s life and history. Lines from what becomes Romeo and Juliet are shouted out by someone decrying the lack of moral fiber in society at the start of the film, for instance. In fact, the entire meta nature of the gender switching is a sop to one of Shakespeare’s favorite plot points. Someone can tell me how many times this appears in his plays—I don’t know off the top of my head; I just know it’s “lots.”

I’d be remiss if I didn’t suggest that one of the draws here is a decent amount of nudity from Gwyneth Paltrow in her 15-years-ago Gwyneth Paltrow prime. Hey, it’s just the truth.

The biggest issue that most people have with Shakespeare in Love is that it won Best Picture over Saving Private Ryan and/or The Thin Red Line. I get that. It’s not a bad film, certainly not nearly as bad as a lot of the backlash, but it’s not nearly either of those films. It’s a tragic and bittersweet little romance that contains elements of a much more tragic and less sweet romance with which most people have at least a passing familiarity. And it is romantic in that grand tradition of doomed love.

If anything, it’s a little too clever for its own good, but that’s also probably what made a lot of people like it. When you put in some asides and jokes that a good part of your audience will a) understand and b) will think themselves smart for understanding, you get a lot of people who feel justified in liking what you’ve made and in denigrating others for not getting the smart people stuff. I don’t object to this in general (I like to feel smart, too), but there might be too much of it here.

But hey, great costuming, and it’s always fun to watch Judi Dench kick some ass, even if only with witty repartee.

Why to watch Shakespeare in Love: It’s sweeter than you probably remember it.
Why not to watch: It’s also a little dippier than you remember.