Film: Loulou
Format: Video from The Magic Flashdrive on laptop. 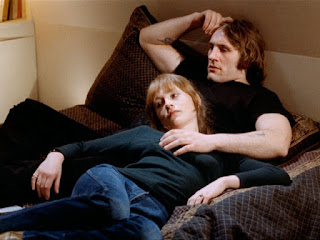 Typically, I watch a film and, if it’s on one of my several lists, I write down what I got out of it. Now and then, I find that I get so little from a film that I have to hunt for information to see what other people have to say about it. Loulou is just such a film. I sat through it and walked away with almost nothing. I’m not prepared to call it a bad film, but it comes across to me as an empty film, one in which there is almost nothing that I didn’t put there myself.

I read through its short entry in The Tome of Knowledge and found little there, too. Then I remembered that fellow 1001 blogger Adolytsi reviewed this film fairly recently. I generally only read reviews of a film after I’ve posted my review, but I was desperate—I have an empty film to write about. It’s not that I couldn’t put any meaning into this film; I just didn’t really want to. Loulou didn’t seem to be worth the effort of giving it some grand meaning.

The long and short is that Adolytsi and I agree front to back on this, up to and including our first reactions about the physical transformation that star Gerard Depardieu has undergone since this film was made. It’s hard to believe looking at him now that he was once a sex symbol and one of the hottest things going. Evidently, shortly after the creation of this film and a few others in the early ‘80s, Depardieu decided that it was a good plan to eat his weight daily in butter and cheese, sort of a French Val Kilmer. Put a leather jacket on the guy in 1980 and he was a stud. Today, he looks like the lovechild of Colm Meaney and a troll doll.

Here’s the entirety of the plot: a woman named Nelly (Isabelle Huppert) decides that her wealthy and safe husband Andre (Guy Marchand) is safe and boring and kind of a dick. So she leaves him and immediately hooks up with Loulou (Depardieu), an ex-con who prefers not to work. Loulou is a thief and is more than willing to steal anything he wants. Other than that, he puts all of his daily energy into sex. So he and Nelly have an astonish amount of sex.

Things get mildly complicated when Andre, realizing that he can’t quite let go, offers Nelly a job. This keeps her close to him. Since she and Loulou need money, she accepts. Ultimately, this means that she maintains a relationship with both Andre and Loulou and continues to sleep with both of them. This is especially true when Loulou gets stabbed and is forced to spend some time in the hospital.

What’s interesting here, or at least what passes for interesting with this film, is that Nelly is completely open about this relationship. She and Loulou and Andre spend time together at one point. She tells Andre, the husband she left, about her affair with Loulou and the fact that she’s doing it specifically for the sex that Andre didn’t provide. A great deal is made of Loulou’s alleged virility, since this is her main reason for leaving a comfortable middle-class life to spend time with a jobless thief.

I’ll be blunt: right about the time that Loulou got stabbed, I decided I really didn’t give a shit and I stopped paying careful attention. Oh, I watched it, but I can’t really tell you everything that happened, because I really didn’t have enough here to make me want to keep watching.

It’s alleged that there’s actually a lot going on here in terms of French society and the decision of Nelly to give up that comfortable existence for one that is sketchier but more interesting, more exciting, and at least in some ways more fulfilling. Who cares? There’s nothing about any of these people remotely interesting enough for me to pay more than cursory attention to them. Once it’s determined that Nelly is in it for the sex with Loulou, and when he can’t provide that she’ll go back to her husband for the same thing, I stopped really wanting anything to do with the film. Nelly is selfish, Loulou is an oaf, and Andre is a weenie.

Subtext schmubtext—this one is as dull as a beige room. The ending, which I gather is supposed to be wrenching, is a big nothing.

Why to watch Loulou: Gerard Depardieu before he became planetary in size.
Why not to watch: There’s not much here.